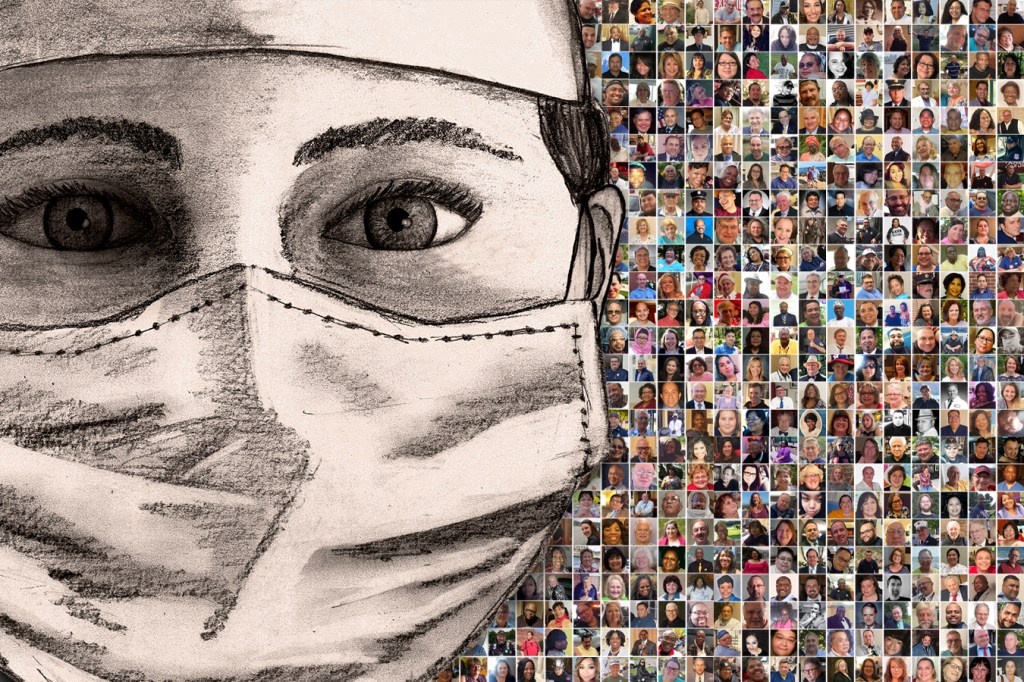 More than 3,600 U.S. health care workers perished in the first year of the pandemic, according to “Lost on the Frontline,” a 12-month investigation by The Guardian and KHN to track such deaths.

Lost on the Frontline is the most complete accounting of U.S. health care worker deaths. The federal government has not comprehensively tracked this data. But calls are mounting for the Biden administration to undertake a count as the KHN/Guardian project comes to a close today.

The project, which tracked who died and why, provides a window into the workings — and failings — of the U.S. health system during the covid-19 pandemic. One key finding: Two-thirds of deceased health care workers for whom the project has data identified as people of color, revealing the deep inequities tied to race, ethnicity and economic status in America’s health care workforce. Lower-paid workers who handled everyday patient care, including nurses, support staff and nursing home employees, were far more likely to die in the pandemic than physicians were.

The yearlong series of investigative reports found that many of these deaths could have been prevented. Widespread shortages of masks and other personal protective gear, a lack of covid testing, weak contact tracing, inconsistent mask guidance by politicians, missteps by employers and lax enforcement of workplace safety rules by government regulators all contributed to the increased risk faced by health care workers. Studies show that health care workers were more than three times as likely to contract covid as the general public.

“We rightfully refer to these people without hyperbole — that they are true heroes and heroines,” said Dr. Anthony Fauci in an exclusive interview with The Guardian and KHN. The covid deaths of so many are “a reflection of what health care workers have done historically, by putting themselves in harm’s way, by living up to the oath they take when they become physicians and nurses,” he said.

Lost on the Frontline launched last April with the story of Frank Gabrin, the first known American emergency room doctor to die of covid-19. In the early days of the pandemic, Gabrin, 60, was on the front lines of the surge, treating covid patients in New York and New Jersey. Yet, like so many others, he was working without proper personal protective equipment, known as PPE. “Don’t have any PPE that has not been used,” he texted a friend. “No N95 masks — my own goggles — my own face shield.”

Gabrin’s untimely death was the first fatality entered into the Lost on the Frontline database. His story of working through a crisis to save lives shared similarities with the thousands that followed.

Maritza Beniquez, an emergency room nurse at Newark’s University Hospital in New Jersey, watched 11 colleagues die in the early months of the pandemic. Like the patients they had been treating, most were Black and Latino. “It literally decimated our staff,” she said.

Her hospital has placed 11 trees in the lobby, one for each employee who has died of covid; they have been adorned with remembrances and gifts from their colleagues.

More than 100 journalists contributed to the project in an effort to record every death and memorialize those who died. The project’s journalists filed public records requests, cross-connected governmental and private data sources, scoured obituaries and social media posts, and confirmed deaths through family members, workplaces and colleagues.

Among its key findings:

The death rate among health care workers has slowed dramatically since covid vaccines were made available to them in December. A study published in late March found that only four of 8,121 fully vaccinated employees at the University of Texas Southwestern Medical Center in Dallas became infected. But deaths lag behind infections, and KHN and The Guardian have tracked more than 400 health care worker deaths since the vaccine rollout began.

Many factors contributed to the high toll — but investigative reporting uncovered some consistent problems that heightened the risks faced by health workers.

The project found that Centers for Disease Control and Prevention guidance on masks — which encouraged hospitals to reserve high-performance N95 masks for intubation procedures and initially suggested surgical masks were adequate for everyday patient care — may have put thousands of health workers at risk.

The investigation exposed how the Labor Department, run by Donald Trump appointee Eugene Scalia in the early part of the pandemic, took a hands-off approach to workplace safety. It identified 4,100 safety complaints filed by health care workers to the Occupational Safety and Health Administration, the Labor Department’s workplace safety agency. Most were about PPE shortages, yet even after some complaints were investigated and closed by regulators, workers continued to die at the facilities in question.

The reporting also found that health care employers were failing to report worker deaths to OSHA. The data analysis found that more than a third of workplace covid deaths were not reported to regulators.

Among the most visceral findings of Lost on the Frontline was the devastating impact of PPE shortages.

Adeline Fagan, a 28-year-old OB-GYN resident in Texas, suffered from asthma and had a long history of respiratory ailments. Months into the pandemic, her family said, she was using the same N95 mask over and over, even during a high-risk rotation in the emergency room.

Her parents blame both the hospital administration and government missteps for the PPE shortages that may have contributed to Adeline’s death in September. Her mother, Mary Jane Abt-Fagan, said Adeline’s N95 had been reused so many times the fibers were beginning to disintegrate.

Not long before she fell ill — and after she’d been assigned to a high-risk ER rotation — Adeline talked to her parents about whether she should spend her own money on an expensive N95 with a filter that could be changed daily. The $79 mask was a significant expense on her $52,000 resident’s salary.

“We said, you buy this mask, you buy the filters, your father and I will pay for it. We didn’t care what it cost,” said Abt-Fagan.

She never had the opportunity to use it. By the time the mask arrived, Adeline was already on a ventilator in the hospital.

Adeline’s family feels let down by the U.S. government’s response to the pandemic.

“Nobody chooses to go to work and die,” said Abt-Fagan. “We need to be more prepared, and the government needs to be more responsible in terms of keeping health care workers safe.”

Adeline’s father, Brant Fagan, wants the government to begin tracking health care worker deaths and examining the data to understand what went wrong. “That’s how we’re going to prevent this in the future,” he said. “Know the data, follow where the science leads.”

Adeline’s parents said her death has been particularly painful because of her youth — and all the life milestones she never had the chance to experience. “Falling in love, buying a home, sharing your family and your life with your siblings,” said Mary Jane Abt-Fagan. “It’s all those things she missed that break a parent’s heart.”