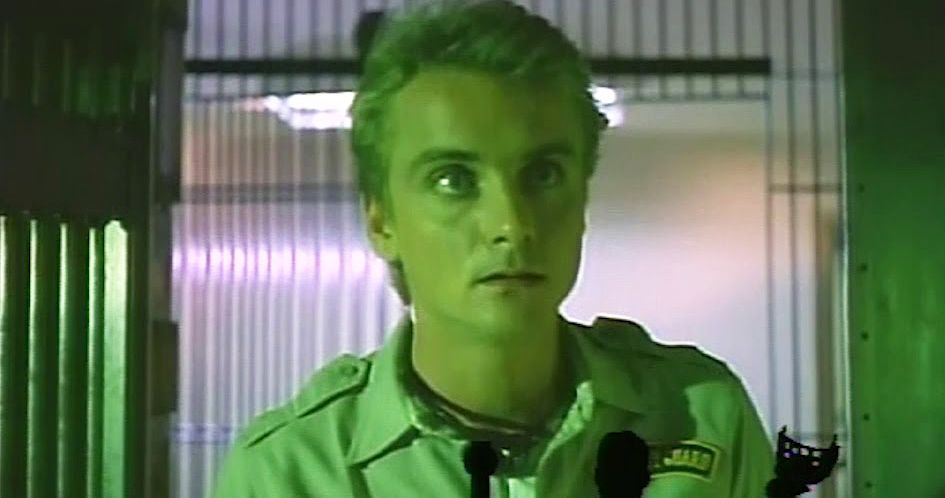 The world is, we are being repeatedly told, going back to a thing the maskless call “normal.” Our very near future is a purportedly normal land of naked faces and human bodies entitled to stand near us in the grocery store, walking down aisles in any direction with no regard for traffic flow. There is no God but chaos and it reigns with a wild, toothy smile that refuses to be hidden.

But also, we get to go to the movies again, so that’s cool.

The thing is, you see, we’ve all forgotten how to go to movie theaters. We’ve in fact forgotten how to be around other people entirely. We have, in the span of just over a year, become feral tetherkind like the underground Us people, all grunts and stories about rabbit snacks. We’ve simply lost the ability to engage in the social act of film viewing.

So, as in all troubled times, we turn to the skies.

Since its humble beginnings in Minnesota local television in 1988, Mystery Science Theater 3000 has provided us the ultimate blueprint for the collective film experience. When people come together to watch a movie, we engage in that most blessed of arts: making stupid jokes. And no one did it better than MST3K.

Or, should I say, does. After all, creator Joel Hodgson just Kickstarted enough money for a new season of the show.

While it had different hosts over its long history — Hodgson, followed by Michael J. Nelson, then Jonah Ray in the reboot — in essence, the premise is the same: A man is trapped in space and forced to watch bad movies. He does so with the help of witty robots. Weirdly, the past year and a half has made this relatable content. But now, we need it more than ever.

Between one local-TV season, seven seasons on Comedy Central, three seasons on the then-Sci-Fi Channel (now Syfy), two seasons on Netflix, and a whole bunch of offshoots like RiffTrax, the show lives on. Because space robots never say die and neither do MSTies.

As we all slowly crawl out of the primordial ooze of our current living conditions out into the light and then back into the darkness of a movie theater, we need to relearn, to retrain ourselves. But first, we need to get some much-needed riffery out of our systems. Enter MST3K.

These are 25 episodes of MST3K ready for you to stream. They will remind you what it’s like to watch movies with other people and/or robots so that you can remember what it’s like to be social. You may cry a little; this is normal. Then you’ll be ready to go to the theater and shut the hell up. But with Joel, Mike, Jonah, and the bots, your silence is not required. Riff on, you shiny diamonds. Riff on.

A band goes camping while a boy finds an alien who can make that Owl City music video. *OK sign* It stinks. (Available on Tubi)

This dystopian teen flick is actually an incredibly fitting episode to view as we attempt to reenter society. Watch it and know that Kim Cattrall chose to do this and not the Sex and the City reboot. (Available on Tubi)

I offer this warning: This episode is not for the faint of heart and I do not recommend it for newbies to the series. But if you think yourself ready, brave, made of stronger stuff, then go for it. May your spirit be as fearless as Torgo’s knees are puffy. Because they’re really, really puffy. (Available on Tubi)

Have you ever wanted to watch a movie where it seems like the teen heroine is in love with both her caveman captor and her father? Well. Here. Here’s that movie. It also features the cherub-faced Arch Hall Jr. busting out some gentle jams. You’ll need them as a palate cleanser. (Available on Tubi)

You know what happens when you neglect your kid? He joins the mafia, kills a guy, then blames you. Then they make it the title of a movie. This is a cautionary tale. (Available on Tubi)

[Insert butterfly-anime meme here] Is this a feminism? Roger Corman accidentally made a kind of progressive film. Starring Beverly Garland, when a town’s marshal is murdered, his wife takes over, much to the chagrin of the local madame/saloon owner/crime boss. Old West patriarchy smashing, who knew? (Available on Tubi)

Joel Hodgson’s last episode, and my, does he go out on a high note. Joe Don Baker is a cop who takes on the mob. I think. Frankly, it’s unclear. But he also has sex with Linda Evans with baby oil and beer on a couch bed, so you’re excused from having any understanding of what else is going on in this film. (Available on Tubi)

A rich woman brings three women over from Europe so she can steal their bodies, but first she makes them clean her house, which is what I assume all rich people do all the time. (Available on Tubi)

This Ed Wood-penned film does not hold up in the Me Too of it all, but it is also the closest thing Wood made to a coherent narrative. A bored, rich teen girl and her similarly privileged friends decide to turn to a life of crime, even getting involved with THE COMMIES. *faints dead away, so scandalized I am* (Available on Tubi)

Actor and journalist Rondo Hatton was delightful in a movie that tried to exploit him. Hatton had acromegaly and appeared in films that used his appearance as a form of horror. But he’s great, the movie is hilariously bad, and it features the angriest man I’ve ever seen in the history of cinema. Just stellar. (Available on Tubi)

Okay, picture it. It’s Escape From New York, but starring Italians pretending to be American. There, I sold you. You’re welcome. (Available on Tubi and Pluto)

As someone who grew up in the Midwest, I apologize for this film. A meteor full of spiders lands in Wisconsin and spiders are just, like, everywhere. They get very big, hence the title, and only middle-aged scientists can stop it. Honestly refreshing. It’s the only refreshing thing about this decidedly musty film, but you’ve got to take what you can get in this world. (Available on Tubi)

You know the gorgeous novel Never Let Me Go by Kazuo Ishiguro? This is kind of that, only with short shorts and Peter Graves. Clones are raised to be used as body parts for their rich and very white counterparts. One finds out and shenanigans and lobotomies ensue. (Available on Tubi and Pluto)

A secret-identity Japanese-superhero space movie? Yes and please and make it a double. Honestly, you’re safe choosing any episode of MST3K that involves dubbed children. They’re all golden. But this one has Krankor, the finest villain with the most beautiful laugh this side of “if Fran Fine and Janice from Friends had a bouncing baby boy.” (Available on Tubi and Pluto)

This movie has everything. Ventriloquists. Hypnosis. Ghosts trapped in the bodies of dolls. Ham. The Great Vorelli uses his ventriloquist dummy to pick up women. It works. This movie is more science fiction than it knows. (Available on Tubi)

This film posits that the future is even ’80s-er than the ’80s. I am fine with this. There is a mutiny that takes place in space, but mostly there is a father and daughter who are the same age, a dead woman who comes back to life, and a Punch Rockgroin. An absolute classic. (Available on Tubi)

A professor (at CASTLETON!) invents a time machine in his adorable baby airplane and immediately ruins the world because of course he does. He has to fix it and does so by going back to the American Revolution and enlisting the goddamned Minutemen. (Available on Tubi and Pluto)

Gomez Addams himself, Raul Julia, stars in this utterly buck-wild film about a man who watches Casablanca then gets turned into a monkey, then gets trapped inside a computer, then becomes Casablanca. Honestly, I don’t know what’s happening in this movie; I just know at one point he says, “Mom, my nuts.” And really, what else do you need to know? (Available on Tubi)

A man gets superpowers, specifically the powers of the puma. Powers like flying and seeing in the dark. You know, standard puma stuff. (Available on Tubi)

Fun fact: If you gently graze a werewolf skull, you can turn into a full-on lycanthrope. It’s true, I saw it in this documentary featuring Joe Estevez and a lot of failed attempts to say “werewolf.” Anyway, watch “Wurwolf,” it’s great. (Available on Tubi)

One of several Gremlins knockoffs, this one involves teens being attacked by hand puppets who make their dreams come true. (Their dreams involve fighting an average white man, procuring a sex worker, and blowing oneself up. Dream big, kids, dream big.) (Available on Tubi and Pluto)

I’m going to get personal with you because I feel like we’ve become friends here. This is my favorite episode of all time. A witch was burned at the stake. It didn’t take. Her sister is her great-grandmother. She falls in love with a boring man. There are walnuts. This is where the fish lives. That’s really all you need to know. You’re all caught up. Just watch it. (Available on Tubi)

Like a Diet Rite Rebecca, this film follows a heavily gaslit second wife as her husband tricks her with peacocks and skeletons because he definitely didn’t kill his first wife. (Available on Tubi)

Like Showgirls but coated in a fine sheen of Mazola. A woman follows her dream of becoming a go-go dancer for an abusive, leering drug dealer. People have really great dreams in these movies. (Available on Tubi)