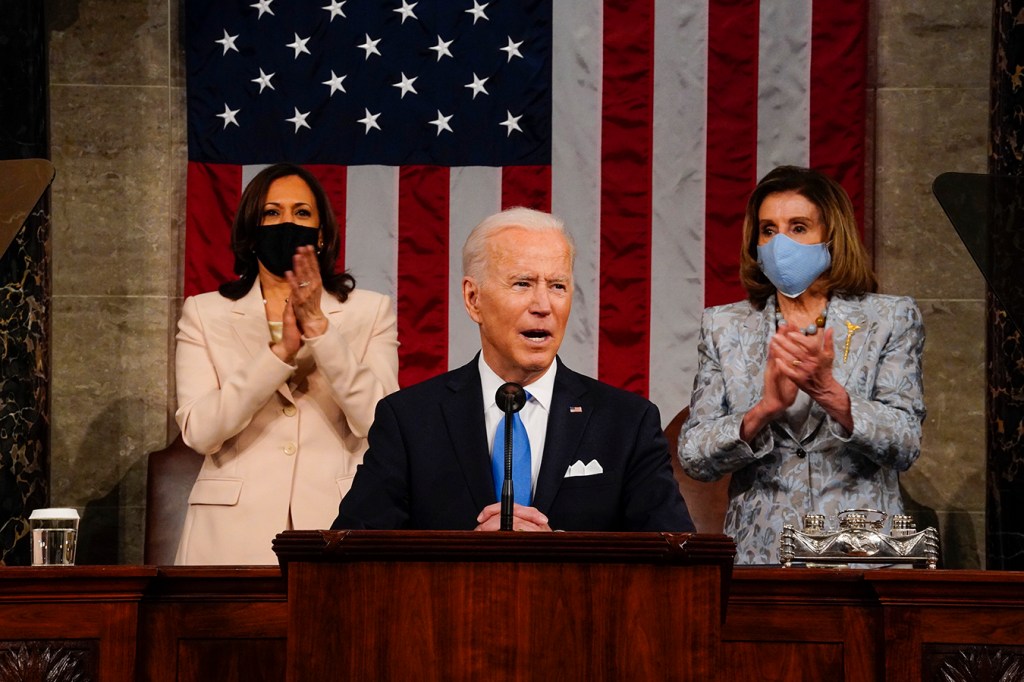 In his first speech before Congress, President Joe Biden argued it was time to turn the coronavirus pandemic into a historic opportunity to expand government for the benefit of a wider range of Americans, urging investments in jobs, climate change, child care, infrastructure and more.

Biden said that taxes should be increased on corporations and the wealthy to pay for new spending, as well as to address escalating inequality.

“My fellow Americans, trickle-down economics has never worked. It’s time to grow the economy from the bottom up and middle out,” Biden said.

He repeatedly urged Congress to act on a variety of measures, including issues like gun control and immigration that have frozen Congress for decades. He said police reforms proposed in the wake of the death of George Floyd should be enacted and specifically urged bipartisan consensus.

“I know the Republicans have their own ideas and are engaged in productive discussions with Democrats. We need to work together to find a consensus,” Biden said.

And he recounted a visit he made to a mass-vaccination clinic in Glendale, Arizona. “I asked a nurse what it’s like,” Biden said. “She looked and said every shot feels like a dose of hope.”

The coronavirus pandemic limited the audience to 200 masked and distanced members of Congress and other officials, down from a typical audience of about 1,600.

And for the first time in U.S. history, two women sat directly behind the president as he delivered his speech: House Speaker Nancy Pelosi (D-Calif.) and Vice President Kamala Harris, the first woman to serve in that position.

“Madam vice president,” Biden said. “No president has ever said those words, and it is about time.”

For the most part, Biden’s statements about his progress and future plans aligned with estimates from think tanks or government data. In some cases, he left out information that would give Americans a full picture. Our PolitiFact partners checked his statements regarding a range of subjects. You can read their complete story here. Biden also discussed the ongoing covid pandemic and other health care issues. Here are highlights from his speech:

During these 100 days, an additional 800,000 Americans enrolled in the Affordable Care Act when I established a special sign-up period to do that. 800,000 in that period.

This appears accurate but needs context.

When I was sworn in on Jan. 20, less than 1% of seniors in America were fully vaccinated against covid-19. One hundred days later, 70% of seniors over 65 are protected. Senior deaths from covid-19 are down 80% since January.

This is largely accurate.

According to the Centers for Disease Control and Prevention’s Data Tracker, 0.8% of those age 65 and older had been vaccinated by Jan. 20. So Biden is correct on this point.

However, when Biden took office, the U.S. vaccination program had been in place only for about a month — the Pfizer-BioNTech and Moderna vaccines weren’t authorized for emergency use until mid-December. And initial recommendations from the independent Advisory Committee on Immunization Practices prioritized vaccination of health care workers, and then long-term care facility residents. The next two phases included people 75 and older and then 65 and older, meaning that some states may not have started vaccinating these age groups until mid-January.

As of Wednesday, the CDC reported the share of those 65 and up who had received complete doses of a covid-19 vaccine and are fully protected at nearly 70% — it was 68.3%. The percentage who have received at least one dose is higher: 82%.

A senior administration official provided CDC mortality data for all Americans, but not statistics specifically about seniors. That data shows the covid daily death rate dropped by nearly 80% from Jan. 20 to April 27. Based on additional, age-specific CDC data provided Thursday by the White House, the overall decrease in the daily death rate for people older than 65 was between 92% and 95% — an improvement better than what Biden cited in his speech. [Editor’s note: This section was updated to clarify the data.]

The Associated Press reported on April 22 that the best available data appeared to show covid deaths for those 65 and older had declined by more than 50% since a peak in January, but said the “picture is not entirely clear because the most recent data on deaths by age from the Centers for Disease Control and Prevention is incomplete and subject to revision.”

The recession caused by the coronavirus pandemic was ‘the worst economic crisis since the Great Depression.’

Two key metrics back this up.

The biggest economic hit since the Great Depression in the 1930s was generally considered to be the Great Recession from 2007 to 2009, but the recession caused by the pandemic packed a bigger punch.

Sen. Tim Scott (R-S.C.), the Senate’s lone Black Republican, was chosen to deliver the GOP rebuttal to Biden’s speech. He said the president is dividing Americans and has failed to deliver on his promise of unity.

“I want to have an honest conversation,” Scott said. “About common sense and common ground. About this feeling that our nation is sliding off its shared foundation and how we move forward together.”

PolitiFact checked five of Scott’s claims, including this statement in which he asserted that it has been safe for some time for schools to conduct in-person learning.

Our public schools should have reopened months ago. … Private and religious schools did. Science has shown for months that schools are safe.

Scott’s statement about what the science has shown is generally accurate, but omits public health experts’ warnings that schools should implement infection control precautions.

“Most private and religious schools have been open for the majority of the school year, and the vast majority have been extremely successful with minimal in-school transmission,” said Dr. David Rosen, an assistant professor of pediatrics at Washington University in St. Louis. “But this is based on the premise that schools are performing the proper mitigations, especially universal masking and preventing symptomatic children from being in the classroom.”

There have also been many examples of large public school districts that have had very few cases of SARS-CoV-2 transmitted in the classroom, Rosen said.

The American Academy of Pediatrics released guidance in June 2020 that said, “All policy considerations for the coming school year should start with a goal of having students physically present in school” for the fall 2020 semester. The recommendations included requiring students to wear masks, maintaining a physical distance of 3 to 6 feet and potentially including testing and temperature checks in the safety protocol.

Rosen said it was the right thing to do to shut down schools in March 2020 when we didn’t know much about the virus.

“We continued to learn over the summer of 2020, and by the fall it was pretty clear that the virus was not as morbid in children and that masking was key in preventing person-to-person spread,” Rosen said.