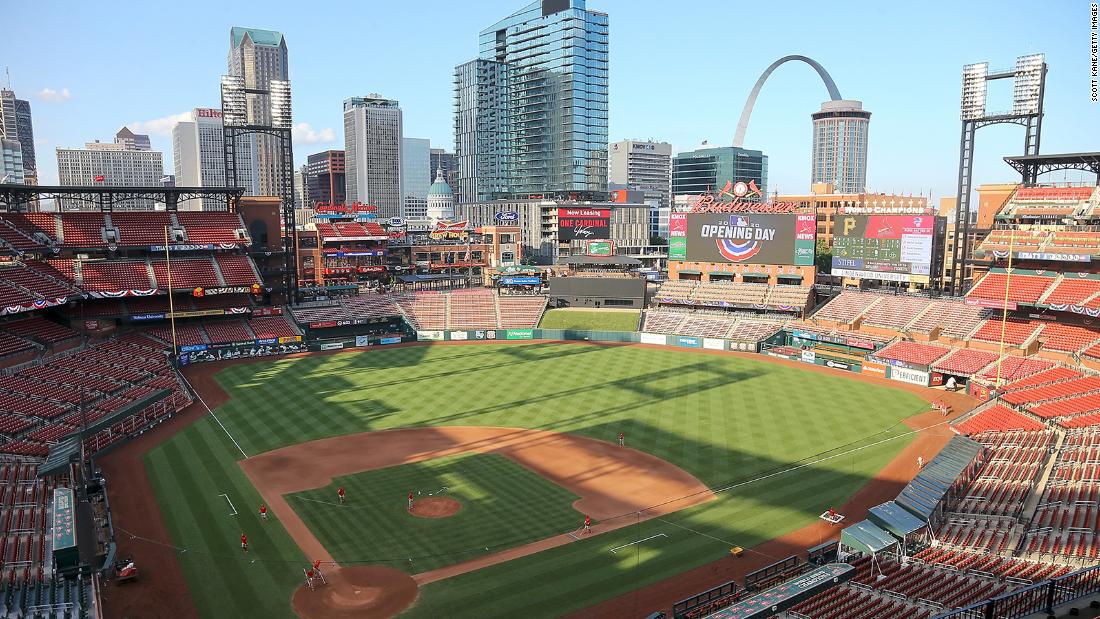 This was excerpted from the August 5 edition of CNN’s Meanwhile in America, the daily email about US politics for global readers. Click here to read past editions and subscribe.

(CNN)You could fill a library with books that portray baseball as a metaphor for American life. Sadly, that’s never been more true as the national summer sport battles to save its reopened season from Covid-19.

When fans might once have woken up to read last night’s scores, they are instead tuning in to find out whether their team’s game has been postponed after another flurry of positive tests from the ballparks. The Miami Marlins has seen 18 players test positive and had to put its infected troops onto sleeper buses to get them back home. Several St. Louis Cardinals players, coaches and staff were also flagged, causing the cancellation of a series against the Detroit Tigers. Unless this is where it ends, it’s becoming harder and harder to see how the league can finish its season.
Stories of players shirking preventative measures mirror the reluctance of many Americans to play ball with Covid-19 mitigation measures. The fact that so many players have been infected by the disease so quickly suggests something else even more ominous — it simply isn’t safe to move around the country.
Baseball chose not to adopt the “bubble” method of two other major leagues, the NBA and NHL which have sequestered players in bio-secure environments encompassing hotels and arenas. Hockey additionally opted to play its entire playoffs in two cities in Canada, which has done a far better job of suppressing the pandemic than the US. The result: Zero positives from more than 7,000 Covid-19 tests conducted during the sport’s first week back on the ice.
Baseball’s problems are proving right the experts so often spurned by President Donald Trump. No one is safe from a relentless pathogen that exploits even tiny gaps in defenses. And if pro sports teams — which have ample access to testing and are isolated from the general public even in normal times — are going down like flies, what will happen to the rest of us?
Baseball’s return, like Trump’s response to the pandemic, so far looks like a swing and a miss.

Three men from the Federated States of Micronesia were found on the beach of Pikelot Island, after a combined US and Australian aircraft search saw their SOS message in the sand.

In an interview that aired Monday night on “Axios on HBO,” reporter Jonathan Swan found it hard to get a straight answer out of Trump on the coronavirus pandemic — until the President let slip a verbal shrug about the deaths it has claimed, even as he claimed everything was under control.
Told by Swan that “1,000 Americans are dying a day,” Trump replied, “They are dying. That’s true. And you have — it is what it is. But that doesn’t mean we aren’t doing everything we can. It’s under control as much as you can control it.”

‘Just when we thought it couldn’t get worse, it did’

The explosion that tore through downtown Beirut on Tuesday afternoon was powerful enough to be felt in Cyprus. Buildings as far as 10 kilometers away were damaged. Shards of glass filled the thoroughfares of Lebanon’s capital, and street lights were extinguished by its force.
A red cloud hung over the capital as the city’s residents — around 4 million people — began to uncover the scale of the damage to their houses, sought treatment for their wounds and frantically called loved ones to see if they were safe.
“I was on the veranda when the entire neighborhood shook left and right,” Bane Fakih, a filmmaker who lives on the western tip of the city, said.
“Beirut port is totally destroyed,” said eyewitness Bachar Ghattas, describing the unfolding scene as something akin to “an apocalypse.”
The tragedy comes after nearly a year of economic and political turmoil that has plunged Lebanon into uncertainty and, according to many experts, brought it to the brink of collapse. Poverty soared to over 50% and scenes of people scavenging garbage dumps for basic necessities have become commonplace. Just months ago, young people staged a popular uprising against the country’s political class, widely accused of corruption.
“I’ve never seen Beirut like this before. Beirut today looks like our hearts,” said activist Maya Ammar. “We have nothing left. Just when we thought it couldn’t get worse, it did.” — CNN’s Tamara Qiblawi writes to Meanwhile from London