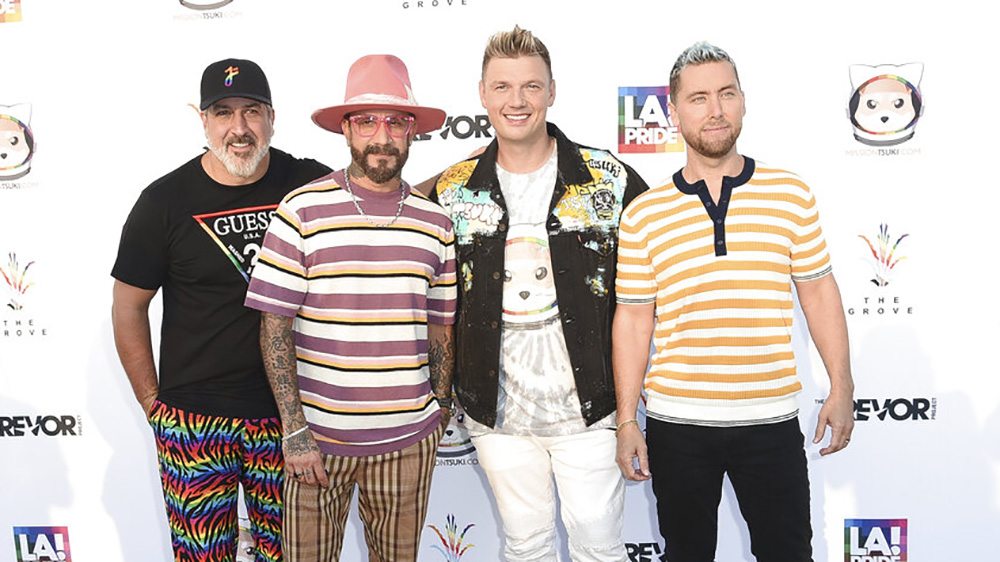 The pop stars united for Bingo Under the Stars, an evening celebrating Pride and benefitting the Trevor Project and L.A. Pride.

“This has been a long time coming,” McLean told Variety during rehearsals. “Everybody’s wanted us to do something together and now we get to come together for an amazing cause.”

“It’s interesting to have the four of us knuckleheads do something together, which you’ve never seen before,” added Fatone. “BSB fans are very loyal, so we’re going, ‘We get it – certain people liked one band or the other back in the day, but now it’s okay to like both.’”

Given the intense rivalry between fans during the boy band pandemonium around the turn of the millennium, Carter joked he could never have imagined such a collaboration at the time. “Twenty years ago? Hell no!” laughed Carter. “I’m kidding, because I still don’t understand why we didn’t get an opportunity to do more things together, but we learned that it was managers and stuff happening behind-the-scenes that prevented it. Better late than never, right?”

As for how Back-Sync brings the musicians different joy to their own bands, Carter said collaborating with *NSYNC after 28 years as a Backstreet Boy was refreshing. “The dynamics are different when you mix-and-match different groups,” said Carter, who previously formed Nick & Knight with New Kids on the Block’s Jordan Knight. “It’s exciting and fun because it brings out a whole other personality that you wouldn’t necessarily do in your own group.”

“It just fits,” added McLean. “Not that that the five of us [Backstreet Boys] don’t work because we obviously do, but it’s a different feeling. It’s like when you’ve been in the same relationship for a long time, take a break, meet somebody new and it’s fresh and exciting!”

The night commenced with bingo hosted by Bingo Boy (Jeffery Bowman) and drag queen Roz Drezfalez. McLean’s 8-year-old daughter Ava and her pals won one round, excitedly rushing to the stage to claim their prize of a dinner at Bistro 1759, a moving restaurant atop the Grove’s double-decker trolley.

The boy banders worked with Carter’s brother-in-law Corey Conrad, vice president of strategic alliances, events and entertainment for the Grove, to organize the evening on the shopping precinct’s level eight rooftop overlooking L.A.

“Are you excited?” Visage asked Hall. “Whatever word’s higher than excited, that’s what I currently am,” he enthused.

McLean performed solo single, “Love Song Love,” which he recently released in support of the LGBTQ community. “When we were writing the treatment for this video, I was adamant about having two beautiful transgender girls and that’s what we did to show our love and support for the community,” he said, after introducing one of those models, Nahla Wyld.

The musicians also presented a cryptocurrency check for one million dollars in $TKINU tokens to the Trevor Project, on behalf of their involvement with cryptocurrency project Mission Tsuki.

“At least one LGBTQ person attempts suicide every 45 seconds in the United States,” said Trevor Project CEO Amit Paley, via video. “[It’s] a statistic that keeps everyone at the Trevor Project motivated to create affirming spaces that we know save LGBTQ lives.”

The foursome then performed Backstreet Boys hit “I Want It That Way” and *NSYNC’s “Bye Bye Bye,” with one fan tweeting Carter “sang ‘Bye Bye Bye’ better than Justin Timberlake could ever dream.”

Although such remarks show competition remains fierce between many fans, there’s no bad blood between the artists, with McLean saying he’d welcome Timberlake to Back-Sync.

“The more the merrier,” said McLean. “Fans still want a Backstreet/*NSYNC tour, but it’s got to be all 10 of us. It’s the only way to make it work, so I think he’d be sleeping on it if he didn’t do it, but he’s a dad doing his thing and I completely respect that. This four is a dream team right now.”

Bass noted that he and Fatone hadn’t yet discussed Back-Sync in *NSYNC’s group text. “We kept it so secret from everyone, so they probably don’t even know this is happening. It was a so last-minute, like, ‘You know what? Let’s do something for Pride.’”

The singers say Friday’s performance is just the beginning of ongoing collaborations. McLean hopes Back-Sync can eventually perform a Las Vegas residency or tour, while Carter’s toyed with incorporating other boy bands. “We were just on stage going, ‘Maybe we should do a supergroup and tour and do an album,’” said Carter. “We’ve come together for a cause greater than ourselves, so let’s let it blossom into something.”

Carter was reluctant to single out which members of New Kids on the Block, O-Town or 98 Degrees he’d want in a supergroup –“Whoever’s available, we’ll take them!”

Fatone would meanwhile love to see Back-Sync on a film set, with even more boy banders. Fatone and McLean starred in Carter’s 2016 Syfy film “Dead 7,” alongside Kirkpatrick, 98 Degrees’ Jeff Timmons, O-Town’s Jacob Underwood and Erik-Michael Estrada and Backstreet Boys’ Howie Dorough. The clan have previously discussed doing a prequel to the post-apocalyptic zombie Western, directed by Danny Roew. “Nick Lachey would be a great person to have, or Jordan [Knight] or Donnie [Wahlberg],” said Fatone.

Showbiz endeavors aside, Bass and Carter will continue working together on Mission Tsuki. The coalition aims to create a new ecosystem in the cryptocurrency world, which will “bridge the gap between the virtual and physical worlds, democratizing cryptocurrency while simultaneously giving back to the broader global community.”

“We’re trying to create an entire universe based off this meme coin that’s going from being the wooden toy to a real boy — a little Pinocchio story,” said Carter, who along with the rest of Back-Sync ended the night at Bass’ bar Rocco’s WeHo. “It’s something that’s never been done before, so we’re really excited.”