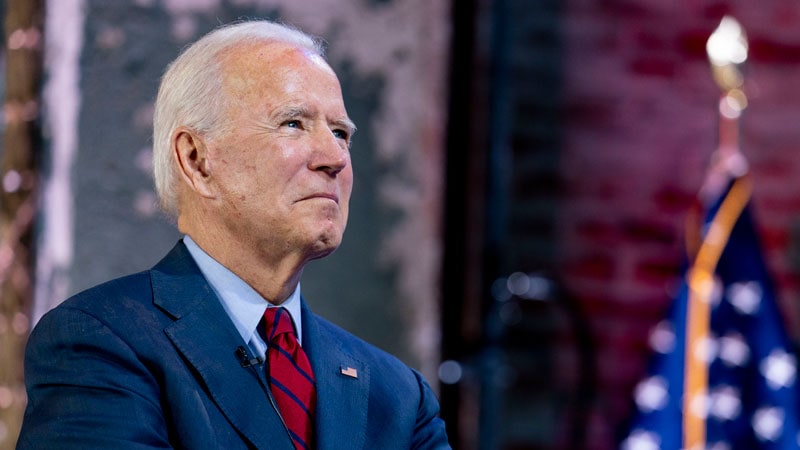 Joe Biden’s victory sets the stage for healthcare to become a high-profile priority of his presidency.

The former vice president has sketched out a big health agenda: ramping up the federal response to COVID-19, boosting the Affordable Care Act, creating a new “public option” to cover uninsured Americans, and expanding Medicare and Medicaid.

But the president-elect’s long to-do list on health is likely to face significant roadblocks in Congress and the courts, experts say.

For instance, Biden’s ambitious proposals on COVID-19 — including his recent call for a national mask mandate — could be waylaid by legal challenges and run into political hurdles on Capitol Hill, where he may face a divided Congress.

“We have a situation that has been like this for a very, very long time — lack of cooperation, lack of recognition that either party is capable of rising above their own electoral views to deal with problems that the country actually has.”

Antos also suggests that Biden may also face enormous political pressure to address the economic fallout from the coronavirus, including record unemployment and business closures, before anything else.

“I think it’s really going to be efforts that are intended to promote economic development and promote the economy,” he says.

In addition, Biden’s plans to expand Obamacare might face a new challenge from the Supreme Court in the year ahead. This month, the high court will take up a new case seeking to overturn the law.

Even so, experts say Biden’s plans on COVID-19 and expanding healthcare are likely to define his tenure in the White House as a central focus of his presidency.

“Healthcare will be at the very top of the list of the president’s priorities,” says Sabrina Corlette, JD, co-director of the Center on Health Insurance Reforms at Georgetown University’s McCourt School of Public Policy. “I do think, however, that the administration is going to be very preoccupied with the response to COVID-19 and the economic fallout…particularly in the first year.”

Biden will move to federalize the response to COVID-19. He has said he will take back major responsibilities from the states — such as setting national policies on mask wearing, social distancing, and the reopening of schools and businesses, based on CDC guidance. In the days leading up to the election, Biden called for a national mask mandate, after waffling on the issue throughout the summer.

He has said he will let public health science drive political policy. Biden is also planning to create his own task force to advise officials during the transition on managing the new surge in COVID-19 cases, vaccine safety, and protecting at-risk populations, Politico reported this week. He received a virtual briefing on the pandemic from a panel of experts as he awaited the election’s outcome.

“I think we will no longer have this confused and contradictory public messaging,” Corlette says, “but I also think there will be humility and the recognition that the evidence is evolving — that we don’t have all the answers, but we’re learning as we go.”

But national mandates on masks and social distancing will be challenging to enforce, experts say. They are also likely to face pushback from business interests, opposition from public officials in GOP-led states, and even legal challenges.

Biden’s ability to work with Congress — or not — may determine whether he is able to implement some of the key components of his coronavirus action plan, which includes:

Biden has not detailed how he would pay for many of these initiatives, beyond promising to force wealthy Americans to “pay their fair share” of taxes to help. He has proposed a tax increase on Americans making more than $400,000 a year, which would require congressional approval.

Antos says he expects Biden’s proposed COVID-19 action plan to be virtually the same as Trump’s in two areas: efforts to develop a vaccine and antiviral treatments.

The administration has spent some $225 million on COVID-19 testing efforts, with a particular focus on rural areas.

Trump launched Operation Warp Speed to fast-track a vaccine. As part of that, the federal government has contracted with six drug companies, spending nearly $11 billion. The operation aims to provide at least 300 million doses of a coronavirus vaccine by January 2021.

Antos would like to see “a more sophisticated approach to social distancing” from the president-elect that takes into account the different challenges facing Americans depending on their income, work situation, and other factors during the pandemic.

“There are a lot of people in this country where working from home is fine and their jobs are secure,” he notes. “It’s the person who used to work at a restaurant that closed, it’s the line worker at a factory that has severely cut back its hours. It’s basically lower-middle-class people, low-income people, middle-class people, and it’s not the elite.

“And the policies have not given enough consideration to the fact that their circumstances and their tradeoffs would differ from the tradeoffs of somebody who doesn’t have anything to worry about economically.

“So, what we need is a more supple policy [that] will give people the information they need and give them the financial support that they also need…so they can make good decisions for themselves and their families. And we basically haven’t done that.”

Obamacare on the Blocks?

The Supreme Court’s decision to take up another case seeking to overturn the Affordable Care Act could hand Biden’s health agenda a major setback — and put the medical care for millions of Americans in jeopardy.

On November 10, the high court will hear oral arguments on a lawsuit that would strike down all of Obamacare. A decision is not expected until next year.

The court has previously upheld the 2010 law, which Biden helped usher through Congress as vice president. But the addition of right-leaning Supreme Court Justice Amy Coney Barrett to the bench last month gives the court a clear conservative majority that could mean the end of Obamacare, legal experts say.

Republicans have opposed the law since its passage, but they have been unable to muster the votes to repeal it, or to pass an alternative.

Antos, from the American Enterprise Institute, notes conservatives believe the law has increased costs for healthcare and insurance over the past decade, in part because of its protections for Americans with preexisting conditions and requiring insurers to provide comprehensive “gold-plated” policies.

“It’s driven up costs, offers plans that are not very strong, put high-risk folks into the same [insurance pool], which has increased costs for everyone, the employer mandate…these are all the reasons,” he says.

The Supreme Court isn’t expected to deliver a decision on the Affordable Care Act before the middle of next year. But the uncertainty will likely push back Biden’s proposals to expand on the law.

Overturning Obamacare would have huge impacts on millions of Americans:

Throughout the campaign, Biden repeatedly stressed the need to preserve the law’s provision barring insurance companies from refusing coverage for Americans with preexisting conditions, such as diabetes, cancer, and heart disease. It also outlaws charging higher premiums on the basis of health status, age, or gender.

Biden has also pledged to bolster the law as president.

He has proposed a variety of add-ons to the Affordable Care Act he says will “insure more than an estimated 97% of Americans,” according to the Biden campaign site.

The boldest of Biden’s proposals is the creation of a “public option” for insurance — a Medicare-like program that small businesses and individuals could choose if they do not have coverage, cannot afford it, or don’t like their employer-based coverage.

It would also automatically enroll millions of uninsured Americans living in the 14 states that have not expanded Medicaid, which covers low-income people.

But such a plan would require congressional approval — including a “super majority” of 60 Senate votes to block a likely GOP filibuster. That will be a significant challenge Biden will have to overcome, with Congress so evenly divided.

The White House would also have to defeat heavy lobbying from some of the most influential industry interest groups in Washington, Corlette says.

“I’m not even confident they would get all the Democrat votes,” she says. “So, it’s a going to be an uphill battle to get a public option passed.”

Taken together, Biden’s plans for expanding Obamacare are projected to cost $750 billion over 10 years. He has said much of that financing would come from increasing taxes on the wealthy.

That means it would likely require congressional approval, which Antos suggests is unlikely given the polarization on Capitol Hill.

Biden has called for a host of reforms targeting Medicare, Medicaid, and rising drug costs.

On Medicare, which primarily covers seniors 65 and older, Biden has proposed lowering the eligibility age from 65 to 60. That could extend Medicare to up to 20 million more Americans.

On Medicaid, the healthcare safety net for low-income and disabled Americans, the president-elect supports increased federal funding to states during the current economic crisis, and potentially beyond.

Medicare is likely to become a key focus of the new administration, in light of the pressures the pandemic is placing on Medicare funding.

In April, Medicare’s trustees said that the Part A trust fund for the program, which pays for hospital and inpatient care, could start to run dry in 2026.

But those projections did not include the impact of COVID-19. Some economists have since projected that Medicare Part A could become insolvent as early as 2022.

Medicare Part B, which pays for doctor and outpatient costs, is funded by general tax funding and beneficiary insurance premiums, so it is not in danger of drying up.

Adding to those pressures is an executive order Trump signed in August temporarily deferring payroll taxes, a primary funding vehicle for Medicare and Social Security.

Under these taxes, employees pay 6.2% of their earnings (on annual income up to $137,700) toward Social Security and 1.45% for Medicare taxes each pay period. Employers pay the same rate per paycheck, adding up to a combined 12.4% Social Security tax and 2.9% Medicare tax.

Biden has said he would reverse the tax cut when he takes office.

But to get a handle on Medicare and Medicaid funding issues, he is likely to need congressional support. Corlette and other experts say that could be a challenge while the nation remains in the grip of the coronavirus pandemic.

In addition to his Medicare and Medicaid reforms, Biden has proposed several plans to lower drug prices, a subset of rising healthcare and insurance costs.

In 2020, retail prices for 460 commonly prescribed drugs have spiked an average of 5.2%, according to new analysis by 3 Axis Advisors, a health research firm.

That’s more than double the projected rate of inflation.

To control drug costs, Biden supports legislation approved by the Democratic-led House of Representatives last year that would empower Medicare to negotiate drug prices with drug companies, as private insurers do.

Federal law now bars Medicare from negotiating prices on behalf of the 67.7 million Americans who use it. Drug companies and many GOP leaders argue that the current law is necessary to allow them to spend more on research and development of new medications.

In addition, Biden supports the idea of lifting bans on importing drugs from foreign countries with lower costs.

He also backs creating an independent review board to set price caps for new medications with no competitors, making high-quality generics more available, ending tax breaks for drug-company advertising, and limiting their leeway in raising prices.

All of these proposals would likely require congressional approval and could face legal challenges in the courts.