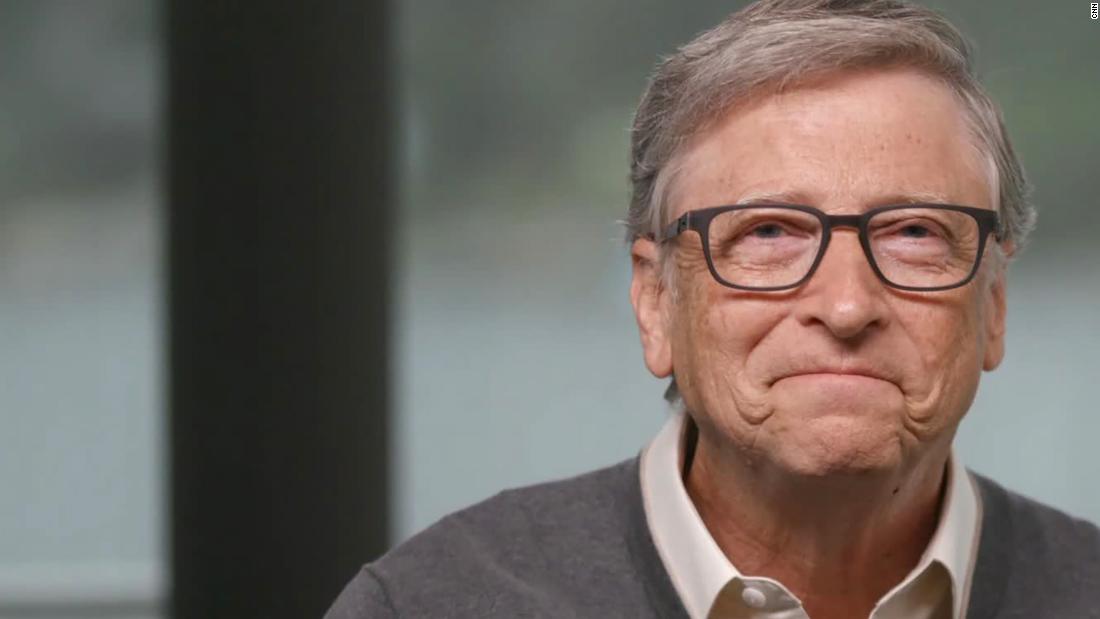 (CNN)Microsoft founder Bill Gates said Thursday that the current coronavirus picture, both globally and in the US, is “more bleak” than he would have expected.

Speaking to CNN’s Anderson Cooper and Dr. Sanjay Gupta in a Coronavirus Town Hall, Gates said the fact that people are still dying in the US today shows that the country is “not even close” to doing enough to fight the pandemic.
“It’s possible to ramp up testing for a new pathogen very, very fast,” he said.
“In fact a number of countries did that extremely well in this case and the technology keeps getting better there. The US in particular hasn’t had the leadership messages or coordination that you would have expected.”
Eight weeks ago, when Gates was last a guest on CNN’s Town Hall, the death toll in America stood at 63,000 with more than one million cases recorded. Today, those figures have doubled — there are at least 2.4 million confirmed cases of Covid-19 in the US, and more than 122,000 people have died, according to Johns Hopkins University data.
Gates attributed the rise in numbers to a lack of testing and contact tracing, as well as a lack of mask wearing. He said other countries that had done those things effectively had seen numbers drop.
Coronavirus cases surge in several states
“The range of behaviors in the US right now, some people being very conservative in what they do, and some people ignoring the epidemic, is huge,” Gates said.
“Some people almost feel like it’s a political thing which is unfortunate,” he added, something he says he didn’t expect in America.
“The governor of North Dakota, a friend of mine, had to say ‘please don’t be mean to people wearing a mask’ which kind of blows the mind.”
Gates dismissed the White House’s claim that an increase in case numbers is a direct result of an increase in testing, calling it “completely false.”
He also expressed disappointment with what he called a lack of US leadership to tackle this virus globally, which has led to developing countries — such as Brazil and India — bearing the brunt of this disease.
However, he said he remains hopeful that the US will “step up” and help get the tools, particularly the vaccine, out to everyone in the world.

The search for a vaccine

In terms of a timeline, Gates said he’s aligned with Dr. Anthony Fauci, the nation’s top infectious disease expert, on his prediction that there will be a viable vaccine by the end of the year, or early 2021. He said he and Fauci are in constant contact.
In February, Gates, who along with his wife Melinda, run the Bill and Melinda Gates foundation, pledged up to $100 million to help contain the coronavirus outbreak around the world. They said the funds would be used to help find a vaccine for the virus, limit its spread and improve the detection and treatment of patients.
During the Town Hall, Gates explained that there are two characteristics being evaluated in developing a vaccine. Firstly, that the vaccine prevents you from getting sick and secondly, that it prevents you spreading it to others.
On the latter, he warned that “it’s not guaranteed that the vaccine will be a perfect transmission blocker.”
Despite that, Gates said recent evidence points to the antibody response being “very strong,” which suggests about a year of immunity to anyone who gets the disease.
For every American diagnosed with coronavirus, 10 more were missed, CDC says
The biggest hurdle, in his view, won’t be developing or distributing a vaccine — it will be ensuring people take it.
Due to the urgent need for this vaccine, the time for scientists to trial it on different age groups and pregnant women will be reduced, he explained.
“It’s a challenge to get that safety database to build up the confidence,” he said.
Ultimately Gates said he thinks most people will take it.
“If it’s a great vaccine, including the transmission blocking, everyone will benefit from the fact that 70 to 80% of the people will take the vaccine,” he said. “We should be able to get herd immunity if you get up to that level, so it really could then — really exponentially — drop the numbers.”
However, he cautioned that the entire world would need to get to that level before people could go back to taking vacations overseas as well as safely welcoming international students and sporting events.

Asked whether society would accept this virus as a way of life — like it has accepted mass shootings — Gates said he hopes not.
“It’s pretty severe. I hope the media continues to remind people of the tragedy that is represented here,” he said, emphasizing the inequity of the disease against the elderly, minorities and health care workers.
“Right now if you’re in a nursing home, because they’re so worried, you’re actually living almost in prison-like conditions,” he said.
He said older people were right to be worried about getting this and possibly dying.
“This is more than the kids that died in Vietnam and that was a great national tragedy,” he said. “We didn’t ignore that…this is greater than that.”