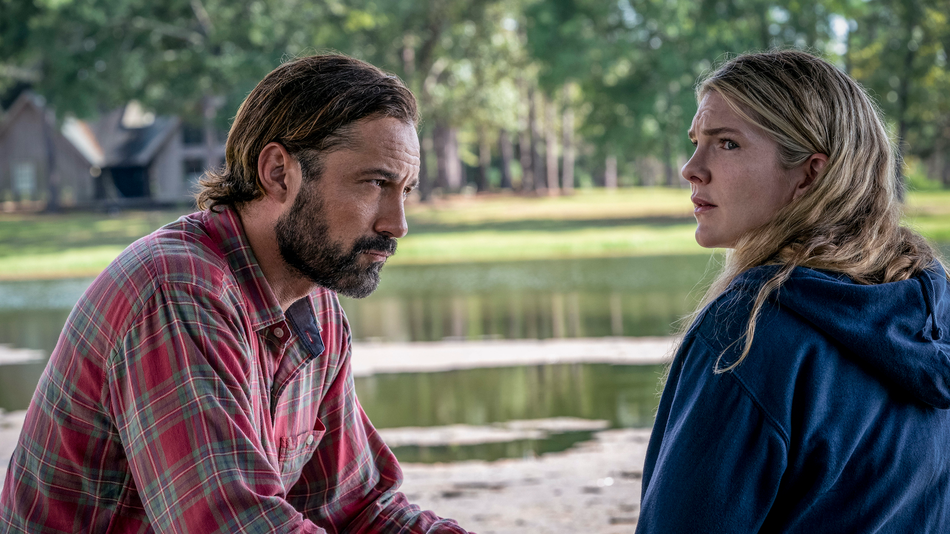 Television thrillers are complex by definition. They have to keep the audience engaged and do so by dazzling them with twists, drama, and shocking revelations that speak to the darkness at the heart of their characters. There is a line, however, and once that line is crossed, those twists, that drama, and the aforementioned darkness become suffocatingly confusing. At that point, the show becomes less of a thriller and more of a pessimistic tableau of all the awful things humanity is capable of, which bogs the show down and dissevers it from its value as entertainment. Tell Me Your Secrets crosses that line. It’s a well made show that is too heavy to even want to finish.

Tell Me Your Secrets tells the convoluted story of Karen Miller, whose incarceration for allegedly abetting her serial killer ex-boyfriend ends at the start of the show. Miller is placed in witness protection and takes the name Emma Hall when her handler-slash-therapist moves her to a small town in the Louisiana bayou. While Emma is in hiding, the mother of a young woman who went missing after being seen in the vicinity of Emma’s ex is determined to track her down, obsessed with the idea that Emma knows what happens to her daughter — so obsessed that she hires a convicted rapist to track the woman formerly known as Karen Miller down wherever or whomever she may be.

Then a swamp monster shows up. And murders start happening. And there’s a child abuse subplot and some deeply uncomfortable semi-religious ritual stuff that keeps popping up when the rapist goes on a road trip. All the while, Emma, who suffers from memory loss surrounding her relationship with the serial killer, begins to recover her memories and piece together what she may or may not know about that woman’s daughter. There’s a lot going on in Tell Me Your Secrets, and the overall feeling amounts to one of confusion, unease, and bad vibes all around.

Calling ‘Tell Me Your Secrets‘ a thriller is like calling being kicked off a building a theme park ride.

In some sense, the skin-crawling discomfort that comes with watching any of the characters on Tell Me Your Secrets is a credit to its cast. Hamish Linklater’s performance as serial rapist John Tyler exudes predatory horror and inspires complete revulsion, Amy Brennaman plays the hateful and obsessed mother Mary Barlow with convincing entitlement, and Lily Rabe tackles the “dual” roles of Karen Miller and Emma with clear distinctions that show the effects of her character’s trauma. The high quality of the acting drags viewers into the characters’ world completely, and therein lies the problem. Their world sucks, everyone in it is terrible, and spending any time there would only please someone with a fetish for hopeless bummers.

Calling Tell Me Your Secrets a thriller is like calling being kicked off a building a theme park ride. Thrillers need to dip and climb to maintain suspense; Tell Me Your Secrets is all dips all the time. Something terrible happens in the first episode, and something more terrible happens as a result of that. Somebody has a bad idea and the consequences of that bad idea are bad. Once the pattern of “hold on, it’s worse than you think” sinks in (which shouldn’t take long), the actual twists in the show become irrelevant because the end result will always be predictably miserable.

Tell Me Your Secrets is 10 episodes long and ends on a cliffhanger, suggesting that someone hopes for a second season of this show. This is baffling, mostly because 10 episodes is about four episodes longer than any reasonable person could endure. There’s a reason the more successful modern thriller series (Sharp Objects, Big Little Lies, The Undoing) tap out at six or seven episodes, and Tell Me Your Secrets spends too much time dragging its plot through swamp mud to generate enthusiasm for more of its drudgery. If they make it to the end of Season 1 unscathed, the someone who wants Season 2 won’t be any of its viewers.

Tell Me Your Secrets is now streaming on Amazon Prime Video.

WATCH: What to binge on the best 30-day free trials