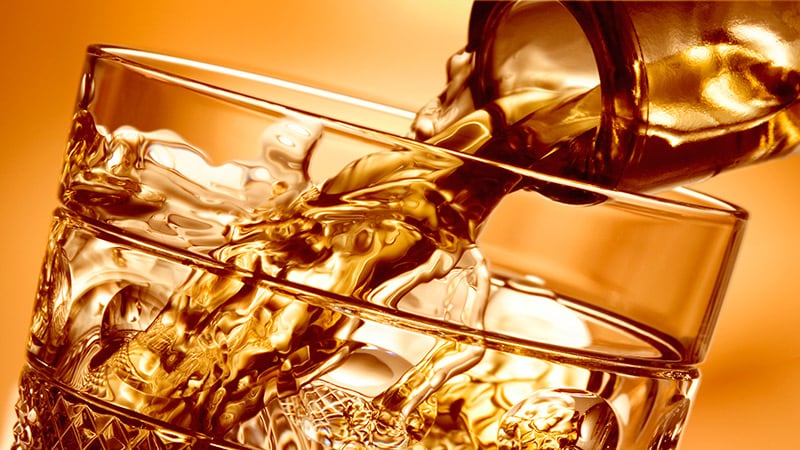 Cardiovascular disease risk is associated with alcohol intake in general, but variations in risk exist with levels of intake, based on data from a genetic-based assessment of more than 300,000 individuals.

“Some individuals are genetically predisposed to drink more alcohol than others, based on the random allocation of alleles,” he explained. This genetic risk should not be associated with confounding variables such as vegetable consumption or physical activity.

In a study presented at the Epidemiology and Prevention/Lifestyle and Cardiometabolic Health meeting, sponsored by the American Heart Association, the researchers analyzed genetic and lifestyle data from 371,463 participants in the U.K. Biobank, a population-based study of more than 500,000 individuals in the United Kingdom. The researchers used traditional and nonlinear genetic approaches to assess causality between alcohol consumption and cardiovascular disease.

Overall, study participants averaged 9.2 drinks per week. A total of 121,708 (32.8%) had hypertension, and 27,667 (7.5%) had coronary artery disease. The researchers found that individuals who consumed light to moderate amounts of alcohol also lived healthier lifestyles, and had a lower body mass index and higher levels of physical activity than did those who abstained from alcohol. Light to moderate drinkers also had higher vegetable consumption, lower red meat consumption, were less likely to smoke, and had higher self-reported overall health ratings, compared with abstainers.

The researchers then applied Mendelian randomization analyses, creating a genetic proxy and finding that individuals who were predisposed to drink more alcohol had a higher risk of cardiovascular disease.

Traditional and nonlinear Mendelian randomization using quadratic associations showed consistently increased risk of cardiovascular disease with increased alcohol consumption, and this risk increased dramatically for the heaviest drinkers. Compared with individuals who abstained, alcohol consumption of 7, 14, 21, and 28 drinks per week was associated, respectively, with 1.2-, 1.7-, 3.4-, and 8.9-fold odds of hypertension, and 1.2-, 2.3-, 6.2-, and 25.9-fold odds of coronary artery disease.

Notably, an increase of one standard deviation in genetic predisposition for alcohol consumption was associated with a 1.28-fold increase in hypertension, as well as significantly increased risk of coronary artery disease (odds ratio, 1.38), MI (OR, 1.37), stroke (OR, 1.26), heart failure (OR, 1.34), and atrial fibrillation (OR, 1.24).

The study findings were limited by several factors, including the inability to detect specific benefits associated with moderate alcohol consumption. However, the results suggest that, although all amounts of alcohol intake convey some increase in cardiovascular disease risk, “recommendations around alcohol use should reflect this nuanced relationship,” Biddinger said.

Studies examining the association of alcohol consumption with cardiovascular (CVD) outcomes have been mostly observational in nature because of ethical considerations, Anna Kucharska-Newton, PhD, of the University of North Carolina at Chapel Hill, said in an interview. “Results of those studies have not been conclusive, and more research is needed. This study takes advantage of the ‘natural experiment’ of the randomized distribution of genetic variants associated with alcohol consumption,” said Kucharska-Newton, who served as moderator for the session at the meeting when the study was presented. “This method is similar to a randomized clinical trial and as such is less subject to confounding and potential reverse causality than an observational study..

“The findings confirm data from previous studies, including published data based on the UK Biobank study and the FinnGen registry of genetic data,” said Kucharska-Newton. “Findings from that study are largely supportive, suggesting that alcohol intake is associated with increased risk of coronary artery disease, an association that is sustained following adjustment for smoking.

“What the present study adds is an elegant presentation of the nonlinearity in that association. However, in contrast to the earlier study that included participants who reported drinking 1–2 drinks per week, Biddinger and colleagues examined effects among those drinking 7–28 drinks per week, making generalization to light to moderate drinkers [the majority] difficult,” she noted.

As for clinical implications, “assessment of habitual drinking is an important element in routine clinical care.” Kucharska-Newton noted. “Alcohol intake of seven or more drinks per week is associated exponentially with increased risk of coronary artery disease and, as other data suggest, increased levels of CVD risk factors. Therefore, CVD risk factor control is of particular importance in this population.

“Additional research in populations of ancestry other than White European is very much needed,” Kucharska-Newton emphasized. “Replication of the analyses presented by Biddinger and colleagues in different cohorts would strengthen inferences from this study. Extension of study findings to clinically manifest CVD would provide more relevant take-home messages. However, prior studies, based on Mendelian randomization protocols, suggest that adjustment for lifestyle factors attenuates the association of alcohol intake with adverse clinical CVD outcomes.”

This article originally appeared on MDEdge.com.