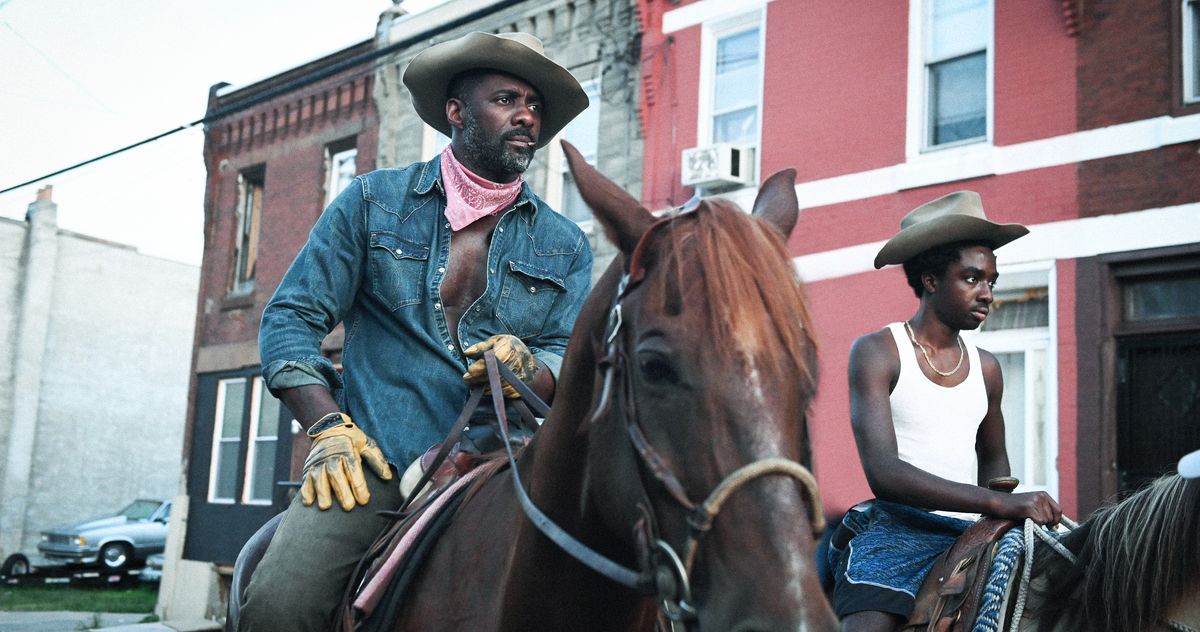 April showers bring May flowers, but before that, they bring hours spent curled up on the couch while the rain outside makes everything feel that much cozier. Netflix has supplied those of us trying to keep dry with plenty of reasons to stay in, with this month’s original-movie highlights consisting of a Korean import oriented around a character dynamic seldom explored in Hollywood, and a holdover from last year’s Toronto International Film Festival inserting a top-form Idris Elba into a milieu also heretofore unseen in American cinema. Beyond that, we’ve got Melissa McCarthy suiting up to fight super-crime, an enlightened look at sex work back in mid-century France, and a spinoff that just might get Stateside audiences hooked on an Indonesian soap opera a couple decades old. Read on for the latest Netflix Originals competing for eyeballs and attention spans:

Romance movies strive to create the feeling that the lead characters are perfect interlocking pieces, just waiting for one another to become complete; Ryuichi Hiroki’s off-center subversion finds more complicated drama by doing away with that idea from the ground up, pairing the bad-to-the-bone lesbian Rei (Kiko Mizuhara) with her hetero crush Nanae (Honami Sato). They’re not meant to be as simple girlfriends, but ever since Rei killed Nanae’s abusive boyfriend as a gesture of compassion, there’s been an unnameable charge between the two women greater than friendship and short of love. As they go on the lam, they share parts of themselves as well as a dynamic that makes this seem more like a vacation of revelation, their bond intensified and limited by the sexual tension that only runs one way. In retrospect, Thelma & Louise took the easy way out.

A fictionalized stand-in for the Fletcher Street Urban Riding Club, a real-life community of inner-city cowboys, sets the scene and refreshes the low-key indie formula for Ricky Staub’s gentrification drama. In a modified-reverse Fresh Prince maneuver, at-risk teen Cole (Caleb McLaughlin) gets sent by his mother to live with family in north Philadelphia, where shoveling manure and learning to ride instills in him a much-needed discipline. But just as he’s bonding with his absentee father (Idris Elba, his gruffness melting into tenderness and guilt), developers mount a land grab for the blocks occupied by the decades-old stables and gang life threatens to consume Cole’s buddy Smush (Jharrel Jerome). The adaptation of Greg Neri’s book peers with circumspect evenness into an enclave of Black life, depicting the neighborhood as a warming support system without scaling back the challenges facing it from within and without.

The soap opera Tersanjung ran on the Indonesian TV station Multivision Plus from 1998 to 2005, amassing a following sizable enough to justify the production of this “free adaptation” serving up the same tortured crimes — both regular and of passion — to a new generation. The self-possessed Yuna (Clara Bernadeth) sets out on her own after the man her family has arranged for her to marry sexually assaults her, and grows into womanhood as she enters a love triangle with well-heeled Ian (Giorgino Abraham) and kindhearted Oka (Kevin Ardilova). The three of them have a good thing going at their noodle shop, but untamable feelings and an unexpected pregnancy throw their fragile dynamic into instability, resulting in belabored emotional peaks and valleys sure to appeal to those acclimated to the soap genre. Everyone else may find Yuna’s troubles either overblown or tedious, however sympathetic a protagonist she may be.

Constant collaborations with her director husband Ben Falcone have stalled Melissa McCarthy’s movie career as of late, and this mildly flavored superhero thriller offers a compact illustration of why. There are faint traces of gut-caliber humor here, most of them attributable to her skill as a riffer. (That, and Jason Bateman as a nonchalant quasi-villain who happens to have crab arms.) But even if she can save the day as one half of a crime-fighting duo with BFF Octavia Spencer, she can’t save an off-brand X-Men script relying on played-out “Kiss From a Rose” needle-drops and a runner about eating strips of raw poultry. The natural comedy that McCarthy exudes when talking, standing, or breathing makes the scenes easier to get through, and yet she still seems stranded in a film that has no idea what to do with itself beyond giving her a spotlight in which to shine.

Netflix’s ongoing project to flip the script on sex work through more fully formed depictions fares better than usual in this portrait of the real-life Madame Claude, the queen of flesh who ran Paris’s most prestigious bordello during the ’60s. While the film hews toward a lot of the same clumsiness endemic to the biopic form — a famous clientele including Marlon Brando and JFK allows the screenplay to indulge in the Walk Hard move of stuffed-in historical figure cameos — the business of pleasure comes off as a cutthroat proving ground like any other, particularly the dog-eat-dog backstage of All About Eve. The grand Madame (Karole Rocher) faces a challenge to her supremacy from hungry newcomer Sidonie (Raw star Garance Marillier, proving that was no fluke), competing to leverage their femininity in exchange for a foothold in a patriarchal time and place. The film is even savvy enough to know that any victory in that race comes with sobering qualifications, too.

As if to prove that the CGI-ified Robert De Niro could have looked a whole lot weirder in The Irishman, star Ecem Erkek portrays the Zeligian character of Gülseren through every phase of her life, from a rosy-cheeked moppet to a latex-faced oldster. As she matures and outgrows the stifling stewardship of her parents, so too does the nation of Turkey have some growing pains itself, weathering the various government upheavals of the late 20th century that provide a backdrop for oddball Gülseren’s story. Her struggles seem to entail “being different” (though kookiness seems enough to make someone a target in this no-nonsense sociopolitical climate), an individuality represented by her ability to see the glowing insects treated here as a magical-realist device. But director Andaç Haznedaroglu and writer Yilmaz Erdogan could stand to further develop their notion of her broadly sketched quirk, more a collection of odd habits and postures than a cohesive personality in defiance of an enforced norm.

Park Hoon-jung, director of the essential Korean gangster epic New World, tries to include a little something for everyone in his latest crime saga, but in practice shortchanges the same wide audience he’s courting. In the winding path of hit man Park Tae-goo (a butter-smooth Uhm Tae-goo), there’s a dollop of the hyper-stylized violence one would expect from the genre and filmmaker, though not nearly as much as the two-hour-plus run time could foster. That spare room is taken up by melodrama, as Tae-goo loses his dear family members and seeks redemption in a sickly woman (Jeon Yeo-been) on his island getaway, as well as comedy, much of it coming from the uncouth crooks on the hunt for our more refined protagonist. In both cases, the long stretches light on action try the patience, lacking in the flash and expertise of the main thread’s dishonorable thieves.

Still to be released this month:

New Gods: Nezha Reborn
The Soul
Ajeeb Daastaans
Arlo the Alligator Boy
Into the Beat
Get the Grift
Stowaway
Tell Me When
Things Heard and Seen
The Disciple
The Mitchells Versus the Machines
Prime Time