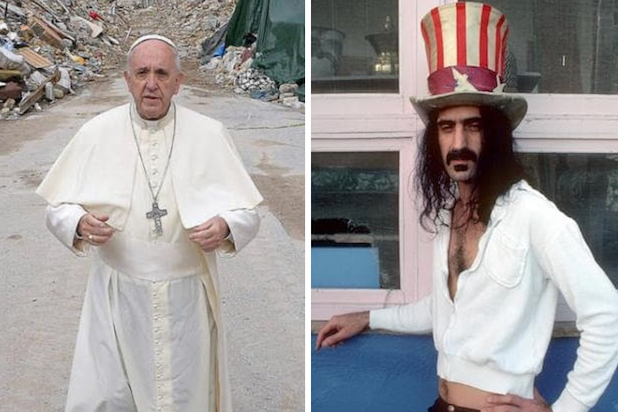 The first all-virtual edition of the DOC NYC festival of nonfiction films announced its 2020 lineup on Thursday, with 107 feature documentaries about everyone from John Belushi to Jamal Khashoggi and Pope Francis to Frank Zappa,

The lineup for the festival, which runs from Nov. 11 through Nov. 19 and will take place completely online, includes 23 world premieres, among them Petra Epperlein and Michael Tucker’s “The Meaning of Hitler,” Nancy Burski’s “A Crime on the Bayou,” Gong Cheng and Yung Chang’s “Wuhan Wuhan” and Jeff Daniels’ “Television Event.”

DOC NYC, which launched in 2010, is the largest festival of nonfiction films in the United States. This year the festival transitioned to a completely online event separated into 14 themed sections, two of which are competitive sections that will award prizes.

The competitive Viewfinders section consists of 11 films, including films set in Venezuela (“A La Calle”), Puerto Rico (“Landfall”), the Dominican Republic (“Stateless”) and the West Bank (“The Viewing Booth”).

The Metropolis competition is made up entirely of films set in New York, among them films about NYPD detective-turned-informant Bob Leuci (“Blue Code of Silence”), fashion queen Ruth Finley (“Calendar Girl”), dancer Bill T. Jones (“Can You Bring It”) and artist Dash Snow (“Moments Like This Never Last”).

The Winner’s Circle section showcases eight films that have won awards at prominent international festivals, including Katrine Philp’s “Beautiful Something Left Behind,” David Osit’s “Mayor,” Jerry Rothwell’s “The Reason I Jump” and Estephan Wagner and Marianne Hougen-Moraga’s “Songs of Repression.”

The Masters section includes new work from such acclaimed filmmakers as Julia Reichert and Steven Bognar (“9to5: The Story of a Movement”), Alex Gibney (“Crazy, Not Insane”), Sam Pollard (“MLK/FBI”) and Errol Morris (“My Psychedelic Love Story”).

In the American Perspectives section, films deal with the United States Postal Service in “Dear Santa,” opioid addiction in “For the Love of Rutland,” ethnic tensions in “Hamtramck, USA,” celebrity restaurants in “Restaurant Hustle” and female police officers in “Women in Blue.”

Also Read: ‘Totally Under Control’ Film Review: The Horror Film of the Year Is a Documentary About COVID-19

International Perspectives includes “76 Days” and “Wuhan Wuhan,” both shot in the city at the heart of the COVID-19 pandemic; “Once Upon a Time in Venezuela,” set in a floating village ravaged by pollution; and “Summerwar,” which follows two young men in a Ukrainian paramilitary camp.

The Investigations section includes films on the killing of Kim Jong-un’s half brother (“Assassins”), the murder of journalist Jamal Khashoggi (“The Dissident”), a pro-Israel lobby in Washington, DC (“Kings of Capitol Hill”) and U.S.-Soviet tensions during the Cold War (“The Jump” and “Neither Confirm Nor Deny”).

Fight the Power is a section devoted to movies about activism, with entries that include “The Big Scary ‘S’ Word,” about socialism; “Nasrin,” about an attorney who is imprisoned for protesting Iran’s law mandating that women wear hijabs; and “Youth V Gov,” about activists who sue the U.S. government for creating the climate crisis.

Also Read: Bruce Springsteen Documentary ‘Letter to You’ to Debut on Apple TV+ This Month

Films about entertainment, the arts and music make up three sections of DOC NYC, and include R.J. Cutler’s “Belushi”; Frank Oz’s “In & Of Itself,” about Derek DelGaudio; Barry Avrich’s “Made You Look: A True Story About Fake Art,” about the largest art fraud in U.S. history; Julien Temple’s “Crock of Gold: A Few Rounds With Shane MacGowan,” about the troubled frontman of the Pogues; and Alex Winter’s “Zappa,” about the iconoclastic musician Frank Zappa.

Here is the DOC NYC the feature-film lineup. Short films and additional programs can be found at docnyc.net.

“Enemies of the State,” Sonia Kennebeck

“So Late So Soon,” Daniel Hymanson

“Things We Dare Not Do,” Bruno Santamaría

“Through the Night,” Loira Limbal

“Can You Bring It: Bill T. Jones and D-Man in the Waters,” Rosalynde LeBlanc, Tom Hurwitz

“Beautiful Something Left Behind,” Katrine Philp

“The Reason I Jump,” Jerry Rothwell

“The Walrus and the Whistleblower,” Nathalie Bibeau

“9to5: The Story of a Movement,” Julia Reichert, Steven Bognar

“Origin of the Species,” Abigail Child

“The Dilemma of Desire,” Maria Finitzo

“For the Love of Rutland,” Jennifer Maytorena Taylor

“The Place That Makes Us,” Karla Murthy

“Once Upon a Time in Venezuela,” Anabel Rodríguez Ríos

“A Crime on the Bayou,” Nancy Buirski

“Neither Confirm Nor Deny,” Philip Carter

“Down a Dark Stairwell,” Ursula Liang

“Since I Been Down,” Gilda Sheppard

“Truth to Power: Barbara Lee Speaks for Me,” Abby Ginzberg

“Off the Road,” Jose Permar

FILMS ABOUT FILM AND TELEVISION

FILMS ABOUT THE ARTS

“Made You Look: A True Story About Fake Art,” Barry Avrich

“In My Own Time: A Portrait of Karen Dalton,” Robert Yapkowitz, Richard Peete