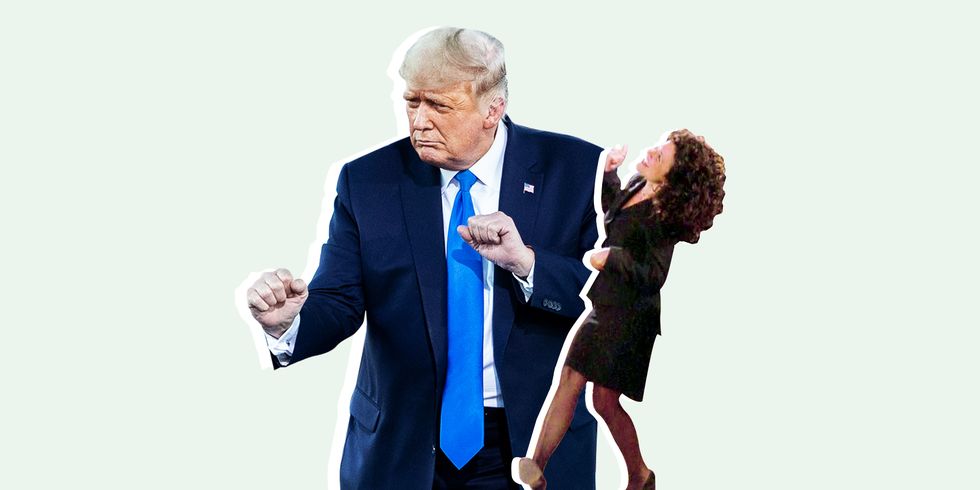 Over the past few years, Dancing with the Stars has made a nasty habit of having terrible people compete as a way to stir up controversial buzz: Sean Spicer, Rick Perry, Carole Baskin. Terrible is a blanket term, really. These characters are shy in charisma and skill, but none have ventured into the territory that is “the Trump twitch.” A clip of the “dancing” President (and we use the term dancing so lightly that it’s more of a suggestion) went viral on social media this past weekend featuring some of his moves from a rally the week prior. The skills were so bad that it caused a flashback for Seinfeld‘s Jason Alexander.

On Saturday evening, the actor tweeted, “The President is apparently a fan of @OfficialJLD‘s famous I can’t dance for shit moves. Julia [Louis-Dreyfus] was working hard to be that awful. I feel like these are his best moves.” Of course, he’s referencing the famous Elaine Benes dance from Seinfeld, which is akin to something between eating a handful of Warheads and having a severe case of athletic cramps. The only issue is, Louis-Dreyfus was doing for comedy, and Trump, presumably, was just doing it.

Because the dance moves have neither rhythm, nor rhyme, the clip can be applied to just about any song you want. The meme has taken off on TikTok because the youths are absolutely brutal and technologically savvy in a way the rest of us can only admire from afar. Alexander quote tweeted Senator Mitt Romney, who seems to prefer the version featuring Savage’s seminal 2014 classic, “Swing.”

In case you’re a Trump Dance Truther, the actual video features him dancing to the song “YMCA.” No, it does not get any better when synced with the correct music.

Dancing with the Stars, come get your man.