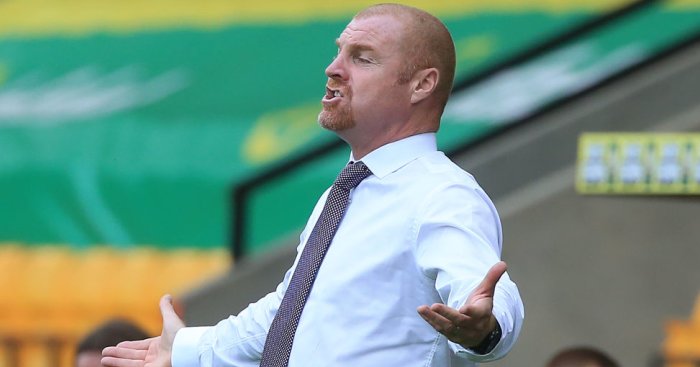 Burnley boss Sean Dyche says the club have had an often “lastminute.com” approach in the transfer market stretching back to the early part of his tenure.

As the Clarets prepare to kick off their 2020-21 Premier League campaign with Sunday’s match at Leicester, their only senior signing since last season concluded has been goalkeeper Will Norris from Wolves, while the current transfer window closes on October 5.

Dyche said at his pre-match press conference that different clubs have different models and “ours has often been ‘lastminute.com’; sell first, buy second, that kind of thinking”.

The 49-year-old, who has been in charge at Turf Moor since October 2012, later used the description again as he referenced Charlie Austin leaving to join QPR in August 2013.

Dyche said: “’Lastminute.com’ started back in the day of Charlie Austin of course, two days before the first game of the season.

“There are many different ways that clubs operate. It is very difficult, it is tricky, but it’s the reality of it. I’ve been here eight years. This is not new news.

“I’ve been saying this for three years at least, saying we’ve got to stretch, we’ve got to pre-plan. But you can only offer these opinions. I don’t sign the cheques, I can assure you.”

Dyche saw a number of players depart the club earlier this summer with their deals at an end, while others are currently unavailable due to injury.

He said he feels Burnley are “a couple of players short, at least, if not more”, adding “there’s nothing that is imminent”, and when asked how worrying the situation was, Dyche said: “Look, that is life here sometimes.

“It doesn’t happen all the time. We haven’t had luck with injuries as well, that is fair to say.

“But this is what I’ve kind of been managing for eight years and it’s just, we’ve got an extreme window of it with that mixture of losing players out of contract and also with injuries.

“I think we had one summer when we got a bit of business done pretty quickly – I think that was the season of the Europa League and that was because we had to get on with things.

“So I think it’s not new ground, it’s tricky ground and it’s hard to navigate your way through – but that’s what we’ve got to do.

“We’ve got to navigate our way through it, look for the players we can get, try and get the finances out of the chairman and the board if we possibly can to affect things and take it forwards if we can.”

Dyche, whose side finished 10th last term, added: “I thought we had a really competitive squad last year, and over the season we found it was very competitive.

“That’s just gone out of kilter from the contracts that were up and players that left us. Now we’ve got to readdress that and that is what we are attempting to do, but it’s not an easy situation.”

Jeff Hendrick, Aaron Lennon and Joe Hart were among those to leave with their deals expiring, while Ben Gibson has joined Norwich on loan.

Dyche has stressed his desire to keep hold of James Tarkowski – the subject of three failed bids from West Ham and also reportedly attracting interest from Leicester – while reiterating his belief the defender is “worth a considerable amount of money”.