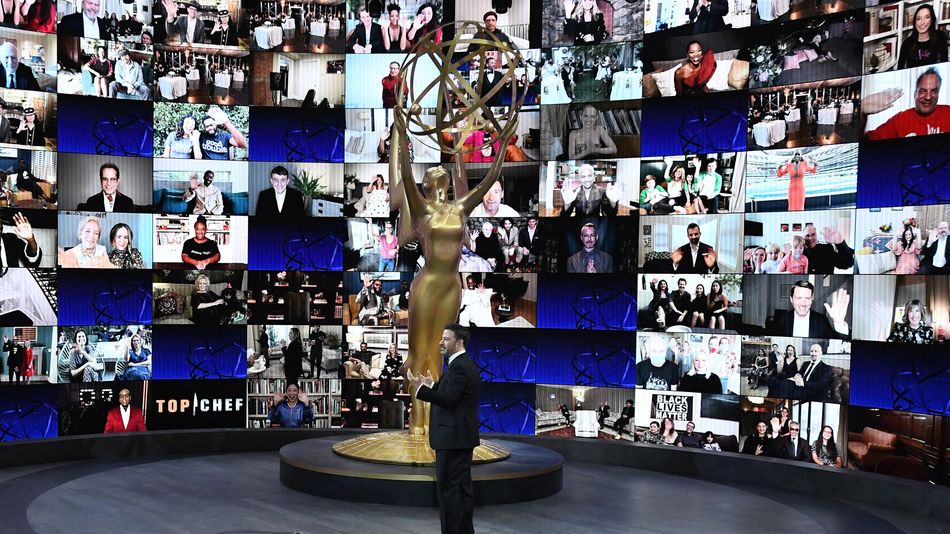 An awkward opening monologue! Stunt jokes that don’t land! An audience of beautiful people! Who said the Emmys were going to feel weird this year?
Jimmy Kimmel opened the “virtual” 2020 Emmys with a less-than-tight five, noting earnestly that “the world may be terrible but TV has never been better.”
He also foreshadowed a huge night ahead for Schitt’s Creek: noting that he was going to be saying those words a lot, to avoid stirring ABC’s censors from their midcentury cryo pods, the show’s logo would appear onscreen to show that crucial C. “And that’s why network television is dead.”
Confusingly, Kimmel’s monologue was greeted with effusive laughter from an audience of unmasked, shoulder-to-shoulder stars, from Jon Hamm and Allison Janney to… Jimmy Kimmel? Yes, it was a bit, reusing footage from last year’s ceremony, and the camera panned to a silent Staples Center, empty of all but a few cardboard cutouts and a cranky real-life Jason Bateman, who is nominated for Lead Actor in a Drama Series for Ozark. Read more…More about Jimmy Kimmel, Emmys, Entertainment, and Movies Tv Shows
Read More