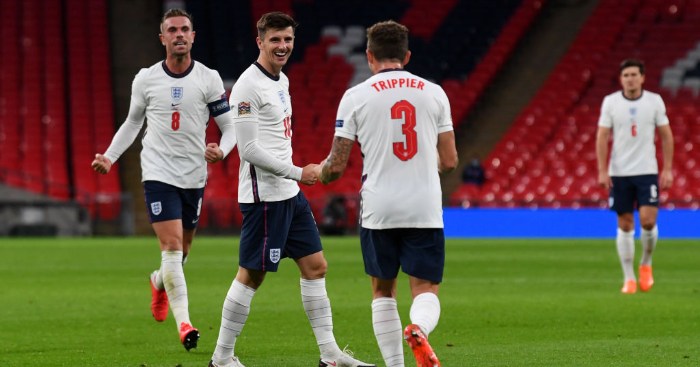 England boss Gareth Southgate believes the win over Belgium is a ‘big moment’ for his team.

Belgium started the game strongly and took the lead in the 16th minute. Former Man Utd striker Romelu Lukaku was clumsily brought down by Eric Dier to gift Belgium a penalty.

Lukaku made no mistake from the spot, sending Jordan Pickford the wrong way to put his side ahead. Belgium were well in control but England were awarded a lifeline with a penalty of their own in the 39th minute.

Jordan Henderson was brought down by Thomas Meunier, and Rashford smashed the ball home to level the game going into the break.

England enjoyed a much better second half. Mason Mount scored the only goal of the half, as his deflected shot looped over Simon Mignolet and into the net.

The Three Lions held on to earn a valuable three points against the world’s top-ranked team. Southgate told Sky Sports that the first half was a challenge for his side:

“They are an absolute top side. We knew some of the questions they would ask us down the sides of our defensive block, but to answer those questions is more difficult.

“The timings of those runs, the overloads in wide areas. There are so many decisions for our players defensively to have to make. For sure they caused us problems with that.

“We did not retain the ball well enough in our build-up and we were a bit slow to move the ball up the pitch. We did not ask enough questions of stretching them which would allow us to drop players lower as well.

“But it was a top-level game and I think we had a lot of young players there – Rice, Mount, Trent – for whom that was a really great experience.

“You do not come into these games and not have to deal with their level of quality. We had to deal with those problems and see that spell through. We had the resilience to see it through and then that allowed the game to open up.

“The penalty gave us a great foothold in the game. The second half performance without the ball was good, because you have to be perfect without the ball against these teams. We were so compact, our covering positions were good.

“Trippier was like a soldier out there, an unbelievable defensive performance. But right through the team in that second half, you have to suffer to win these games, and they did that.

England had to cope with a lot of first half pressure from Belgium. But they came through that and grew into the game the more it went on.

With this win, Southgate’s side move ahead of Belgium to lead Group A2 of the Nations League. England have seven points, one point more than Roberto Martinez’s side in second.

Southgate added: “You try to help the players understand what problems the opposition’s movement is causing. That was pretty clear to us but the players have to solve it themselves and they did.

“In the second half, the work of the front players to press – Rashford and Mount were phenomenal with their performances.

“You cannot just play with the ball, we can be a free-flowing, free-scoring team. But against the very best, the detail of how to defend as a team has got to be bang on. In the second half we got that right, but in the first half we struggled with their quality and their movement.

“We should not have got caught on the penalty really. We know that they are a superb counter-attacking team, and we should have been positionally better on those transitions.

“But to respond in the way that we did and to ride that storm was really impressive. The players can take a lot of heart from it.

“There is loads that we can still get better at. We will not get carried away at this win, we have to back it up against Denmark first and foremost. We know the level of opponent today is a level we have to aspire to on a consistent basis.