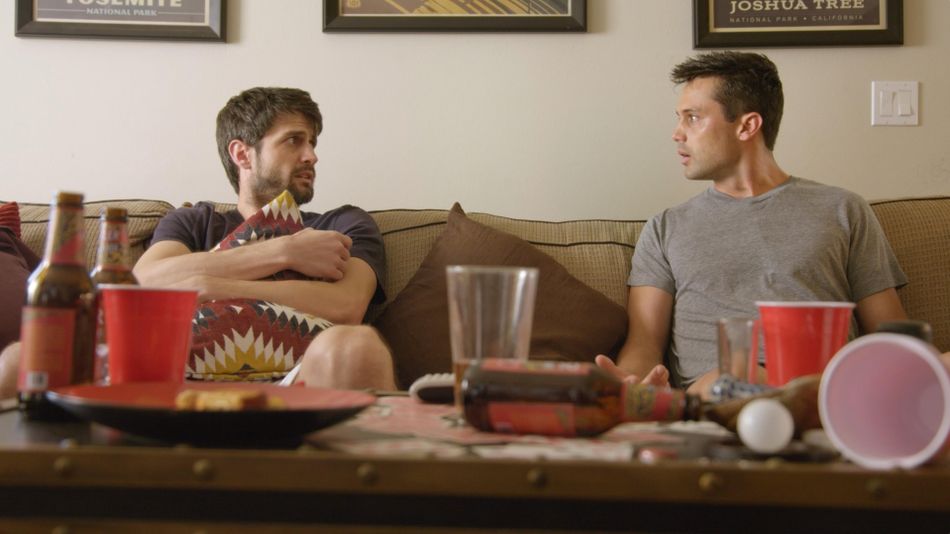 I don’t know about you, but I can’t think of a single soul who’s doing great right now.

The world is still dealing with a pandemic, people’s personal and professional lives have come to screeching standstills, and we’re trying to make it through raging, relentless shit storms of uncertainty one day at a time — all while putting on brave faces.

Based on our collective struggle alone, a new show on Hulu called Everyone Is Doing Great might sound like the last thing you want to watch. The title comes across as annoyingly positive, but its sarcasm becomes abundantly clear in the pilot episode, when you learn these characters are most certainly not doing great. They’re living complex, messy lives just like the rest of us, and watching them spiral onscreen will make you feel less alone.

Everyone Is Doing Great was created, co-written, co-produced, and directed by stars James Lafferty and Stephen Colletti — two actors you likely know as former teen heartthrobs from a little 2000s drama called One Tree Hill. The dark comedy follows Jeremy and Seth (also two actors and former teen heartthrobs) who’ve been out of work since Eternal, a Vampire Diaries-eque drama that they starred in, ended five years ago. The guys are working on working at the moment, and I wouldn’t say it’s going well.

Lafferty and Colletti teamed up to create this unique series nearly a decade after the One Tree Hill finale aired. They debuted the first two episodes at festivals in 2018, raised more than $250,000 on IndieGoGo to fund the rest of Season 1, and it was acquired for streaming by Hulu in December 2020.

The unassuming first season is a labor of love that could have easily flown under the radar if not for the support of dedicated fans and donors, who the duo refer to as “EDG Heroes.” But even if you didn’t grow up watching One Tree Hill, Lafferty and Colletti are confident the series has something for you.

While unexpected laughs and a comically fitting soundtrack are sure to charm you, one of the show’s biggest draws is its relatability factor.

To set the scene a bit, Jeremy and Seth are both at points in their lives where they’re straight-up going through it. While Seth is making an honest effort to get back into acting and dating by going on regular auditions, working with his agent, stepping outside of his comfort zone career-wise, and wholeheartedly pursuing his crush, it’s clear he has a long way to go before he’s back on a stable track.

Meanwhile, Jeremy has trouble even getting off the couch most days. He’s become an expert at ignoring a dirty apartment, he’s mastered the art of forgetting to buy toilet paper, and he’s a sucker for wearing mismatched clothes. (Fun fact: Jeremy’s unhinged wardrobe and signature shorts paired with tall Ugg boots came from the depths of Lafferty’s own closet.)

“We’re trying to make you laugh through whatever you’re going through in your life and give you somebody else to laugh at as well.”

You might not think you have much in common with two hunky, sad, formerly successful actors who are now getting stoned and drunk on the regular, but when you look past their short-lived fame, Jeremy and Seth are two people dealing with career struggles, relationship problems, and major self esteem issues. They’re wallowing on couches, struggling to motivate themselves, and desperately searching for distractions because they’re in ruts. And in the year 2021, what could be more relatable?

“If you read that log line you might not think there’s much for you in this show. But that’s something that we rubbed up against a lot,” Lafferty explained in a phone interview with Mashable. “Even at the festivals that we took the show to, there were people that came up to us saying that they went into this not expecting to like it, and they came out of it feeling like they’d been seen on this weird personal level. That was so gratifying for us.”

At the end of the day, the creators want to remind viewers that this is a comedy, not a drama. “You’re not meant to sit here and feel sorry for these characters for eight episodes, you’re meant to laugh through their struggles,” Lafferty said. “We’re all about the cringe humor, and there’s a lot of that in this show. We’re trying to make you laugh through whatever you’re going through in your life and give you somebody else to laugh at as well.”

Everyone Is Doing Great introduces delightful characters such as Andrea (Alexandra Park), Isabella (Cariba Heine), and Sarah (Karissa Lee Staples), but it’s Jeremy and Seth’s friendship that will tug at your heartstrings the hardest.

As the two buddies continually turn to each other for support during their professional slumps, their friendship oscillates between adorably intimate and overly co-dependent. The characters share a chemistry so natural and unforced that it’s a clear manifestation of the actor’s real-life friendship.

“I think having those years of our friendship is definitely helpful for Seth and Jeremy to really sell that authenticity we’re looking for in the show,” Colletti explained. “We want it to come off real, you know?”

After Jeremy encounters trouble at home and moves in with Seth, their brotherly dynamic only intensifies. Luckily, Lafferty and Colletti had plenty of experience rooming together to help inspire their scenes.

“We actually lived together for a season of One Tree Hill, but at such a different point in our lives. We were very young — you know, a 21- and 22-year-old couple of knuckleheads — although we were basically at the mental capacity as 32-year-old Jeremy and Seth,” Colletti laughed.

More recently, when they were editing Everyone Is Doing Great, Colletti’s apartment building caught fire and Lafferty welcomed him in with open arms.

“I was displaced for like three months and James was kind enough to allow me to squat in his house on a blow up mattress in our editing room. So besides spending seven or eight months editing together, at the end of the day we weren’t able to go to our prospective homes,” he said. “I had to just roll out my mattress, sleep, and then wake up and meet him back at the computer again.”

“Thankfully a couple of friends with some history were able to withstand having to be around each other so much,” he added.

Though Everyone Is Doing Great was partially crafted from Lafferty and Colletti’s personal Hollywood experiences, it’s not based on them entirely. Sure, the parallel career component feels undeniably meta at times, and some of Jeremy and Seth’s experiences — such as bad auditions — were inspired by the actors’ lives. But the show is ultimately a work of fiction.

That said, it’s not lost on the actors that this project couldn’t exist today without their roles on One Tree Hill. So they want to thank longtime fans for supporting them all these years later by planting a few One Tree Hill Easter eggs (like Jeremy and Seth traveling to North Carolina) and potentially welcoming some familiar faces on the show.

“I think it’s cool to sort of bake that legacy into our show, because we are so grateful to the fans of One Tree Hill. If it wasn’t for One Tree Hill, Stephen and I never would have met each other, and this show never would have come about,” Lafferty said. “So it feels so appropriate to have these little Easter eggs, and hopefully sometime in the future we can bring in [some of our old] cast members.”

Lafferty noted that there was an initial concern about how fans of the CW drama would receive the new show. But as fundraising proved, fans seemed to be pretty supportive right out of the gate.

“There’s no guarantee that would be the case. We’re dealing with some pretty racy stuff happening. Our characters are really starting out at a rock bottom place, more so than anything I think we dealt with on One Tree Hill,” Lafferty explained. “And to [fans’] credit, they really embraced those episodes… They seem to get it. It’s almost like they have grown up with us and were ready for something that was dealing with more adult themes.”

“We obviously don’t ever want this to turn into the One Tree Hill spinoff any more than it already has. We’d love for the show to find its own identity and be remembered and experienced as its own thing,” he clarified. “But at the same time, I think we really want to walk that line of paying homage to where we come from, and leave the actual One Tree Hill reunion for whatever the future decides that could be.”

Where Everyone Is Doing Great goes from here

The eighth and final episode of Season 1 ends on a bit of a cliffhanger, and though the show has yet to be picked up for another season, the boys already have material planned for a Season 2 and 3.

“There’s a lot of growth left for these characters, and we’re going to continue to explore that,” Colletti said. And don’t worry — both actors assured me that the series will never get so meta that Seth and Jeremy write and star in their own TV show.

“We’re trying to avoid that at all costs,” Lafferty laughed.

“Yeah, we’re happy to report that ultimately, we’re not these guys,” Colletti added. “I don’t think Jeremy and Seth can write and produce a show, that’s for damn sure.”

He’s absolutely right, but we love them anyways.

Everyone Is Doing Great is now streaming on Hulu.