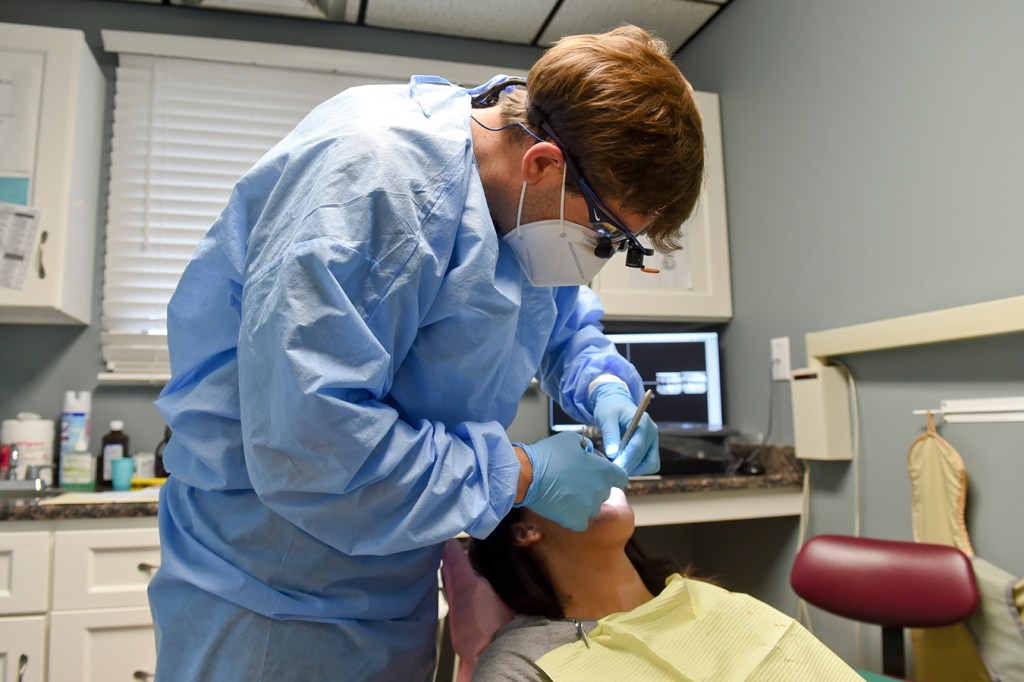 Dr. Monte Junker, an Oregon dentist, is waiting for his turn to get vaccinated for covid even though he considers himself a front-line health worker.

“If they offered it to me today, I would be there,” he said.

In December, just before the first vaccines were cleared for emergency use, the Centers for Disease Control and Prevention immunization advisory board recommended that health care workers — as well as nursing home residents and staff members — be the first to be inoculated because of their high risks of infection.

But Oregon is one of a handful of states, including Colorado, North Carolina and Texas, that have put dentists lower in priority order than other health professionals who treat patients — even though they have their hands in people’s mouths and are exposed to aerosols that spray germs in their faces during procedures.

As a result, dentists in those states must wait while many of their peers got their shots in December.

Dr. Tam Le, president of the Connecticut State Dental Association, was vaccinated in December along with employees at his practice in Cheshire. He said he lobbied the state to include dentists with other front-line hospital and health workers.

“In Connecticut, we are doing really well,” he said, noting that the state set up an online registration system for eligible health workers and then contacted them about when and where they could get the vaccine. Le said he and his staff went to a nearby community health center for their shots.

Dentists gained goodwill from state officials last spring by donating gloves and masks to hospitals, Le said. They also offered to help administer the shots since they have experience with that.

States are increasingly diverging from CDC guidance in their vaccination plans, according to an analysis by KFF. “Timelines vary significantly across states, regardless of priority group, resulting in a vaccine rollout labyrinth across the country,” the report said. (KHN is an editorially independent program of KFF.)

The American Dental Association said it’s aware that the lack of a national immunization strategy has meant that dentists and their staffs are not being treated equally across the country.

The CDC advisory board included dentists when it recommended that front-line health workers get priority.

“Each state government’s approach to vaccination will be different based on populations and need, but all dental team members should be prioritized in the first-tier distribution as the vaccines roll out by the different state and county public health departments,” said Daniel Klemmedson, the ADA president. An oral surgeon in Arizona, he has been vaccinated.

In Florida, dentists and their staffs are included among front-line workers eligible for vaccines in the first wave, but a lack of supply has hindered some from getting their shots, according to Drew Eason, CEO of the Florida Dental Association. Some county health departments have also incorrectly turned dentists away, he added.

Dr. Cindy Roark, a Boca Raton dentist and chief clinical officer of Sage Dental, which has 15 offices in Florida and Georgia, said she has no idea when she’ll get vaccinated. She said Georgia dentists in her company have been vaccinated, while those in Florida must wait. The only exceptions appear to be the relatively few dentists affiliated with hospitals. “We are equally vulnerable,” she said.

Still, Roark said she is not upset. “I know I can protect myself,” she said, adding that her office staffers wear N95 masks, face shields and gloves to protect themselves and patients. “Most dentists feel completely safe running their practice and preventing transmission.”

“But we are definitely up there for the copious quantities of aerosol in our faces each day,” he said. “The atmosphere is highly concentrated” with virus.

He’s upset at the poor planning and coordination between states and the federal government to make dentists a priority.

In cases where hospital staffers are declining the vaccine because they don’t trust it, Junker said, hospitals should offer shots to dentists and others who are eager for them.

“I don’t think it’s fair for them to sit on the vaccine for a month or two. It needs to get used, and if the hospital workers later decide to get vaccinated, they can get back in line,” he said.

Dr. Stan Hardesty, a Raleigh, North Carolina, dentist and president of the state dental society, said it’s disappointing to see dentists in other states get the vaccine while he and his colleagues have been told to wait.

“We have been advocating on behalf of our members to have dentists and our team members included in phase 1a as recommended by the CDC,” he said. “Unfortunately, the decision-makers [in the state government] have decided to utilize a different prioritization in their vaccine implementation.”

North Carolina dentists will be in “phase 1b,” which includes adults 75 and older, essential workers such as police officers and firefighters.