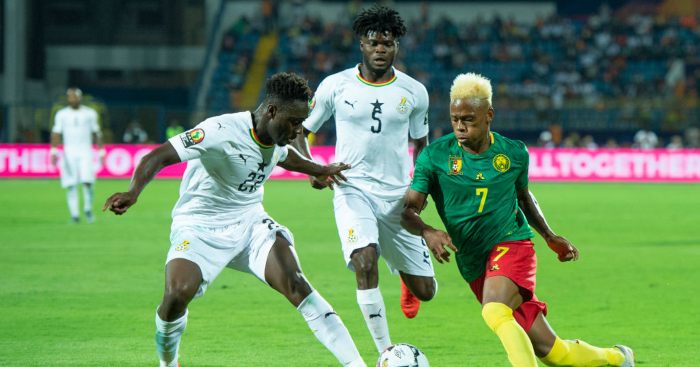 Arsenal fans have been told to expect a player who “grabs the game by the scruff of the neck” when watching Thomas Partey this season.

Those are the words of Reading defender Andy Yiadom, who plays with Partey at international level for Ghana.

The Gunners completed the signing of Partey for a reported £45m from Atletico Madrid on deadline day after triggering his release clause with a little more than half an hour remaining of the window.

OPINION: Why Partey is not the ‘modern-day Vieira’ at Arsenal

The 27-year-old has represented the LaLiga club 188 times, helping them win the Europa League and Super Cup two years ago, but has now agreed a switch to Arsenal on a long-term deal.

And now Yiadom has endorsed the deal after seeing first hand what he can bring to a football team.

“He grabs the game by the scruff of the neck,” Yiadom told Goal. “He has a lot of qualities.

“When I’ve watched Atletico, it does seem like he sits there and does the dogged work, but when he is away with us he has a lot more to his game than that. I think his record in terms of goals for Ghana (10 goals in 27 games) proves that because every time I seem to go away with Ghana he scores, so he has got that attacking threat as well.

Yiadom added: “He’s athletic, he’s really good on the ball, he’s skilful and he’s got a great set-piece in him.

“The way he keeps the ball in tight positions when you think he might lose it is really impressive. He just stands out, it’s hard to describe him as a certain type of player because I don’t think I can.

“But personally, and this is going off what I see from him in training and also the games that he has played for Ghana, I think he has the attributes for the No.8 role and to be more of a box-to-box midfielder.

“Atletico obviously are really rigid and extremely disciplined, but having trained with him, I don’t see him as a player who just dogs about and protects the defence – he has got a lot more quality to him than that.”

Yiadom grew up supporting Arsenal as a boy and he admits that it’s “bit surreal” that a team-mate of his is joining Arsenal.

“It’s all a bit surreal,” he admits. “It’s just a little bit crazy for me that he’s going to the club I’ve supported since I was young.

“I’m really excited that they have signed him. I think he’s a great addition and will make a big difference for Arsenal.

“He’s in his prime and is a fantastic player and I know that he will go there and do extremely well.”