West Ham’s whole season now looks set to provide a textbook example of the concept of perspective after a deeply disappointing afternoon at the worst possible time.

Leicester’s catastrophic defeat at Newcastle on Friday night had left the Foxes facing – in the inimitable words of Joleon Lescott on Sky – “itchy bum time” and left the Hammers with a clear and obvious shot at Champions League football.

Beat Everton and West Ham would have been two points behind Leicester with games against Brighton, West Brom and Southampton to come. The Foxes face Manchester United, Chelsea (twice, with the FA Cup final to squeeze in as well) and Tottenham.

Instead this usually bright and vibrant West Ham side picked this afternoon and a vital El Moyesico to turn in their most insipid and lifeless display in months. They managed not a single shot on target in 90 minutes against a slick and organised Everton who are starting to approach Manchester United levels of away-day delight.

This was by any reasonable measure a very poor performance from a side we no longer expect it from. And so it all becomes a question of framing. Was their Champions League shot – now surely gone – a free hit because it was so unexpected, or a moment of extreme heightened pressure with that very unexpectedness meaning it was a one-off chance that may never come round again?

Perhaps the best answer to that question can be found in the reaction at Everton, who now (quite rightly) find themselves celebrating the renewed prospect of qualifying for European football next season despite themselves having flirted really quite hard with the top four in the early months of the season. 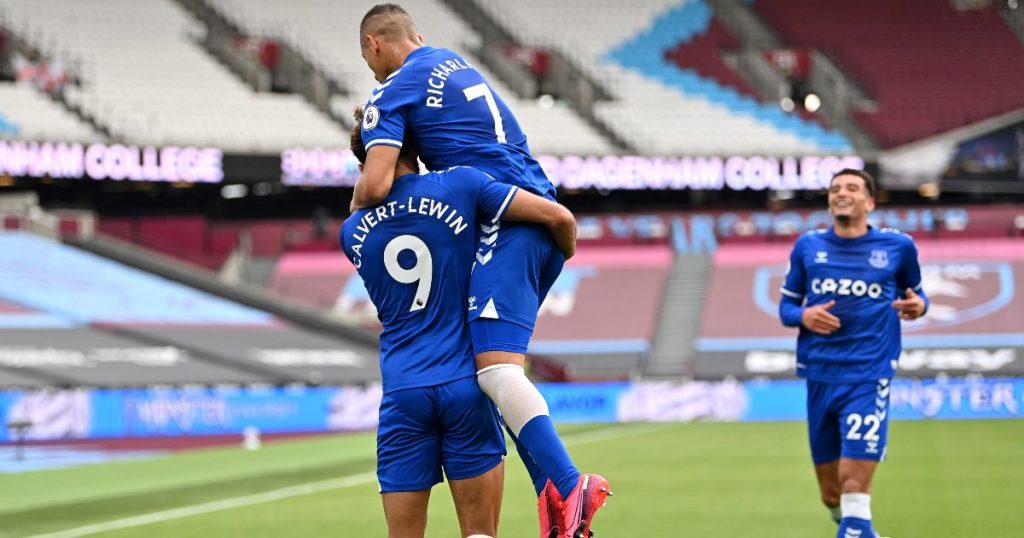 The Hammers will not publicly give up on the prospect of Champions League football just yet, but attention must now turn to making sure something tangible is taken from this extraordinarily good season. While Spurs or Liverpool might turn their nose up at the Europa Conference League spot that awaits the Premier League’s seventh-placed finishers, West Ham (and indeed Everton) are not so blase about continental football. For a team that spent last season fighting relegation, it would be spectacular to bring European football to the London Stadium.

But there are still eight teams in European contention and one of them is going to join Arsenal on the sidelines. Liverpool with their game in hand will still have one eye on a late season-salvaging charge at imploding Leicester, while Spurs and Everton join West Ham in the fight for the other Europa League and single Conference spot. There was never going to be any shame in missing out on the Champions League for West Ham, but the pain it causes will change based on its manner.

If they can put tolhos defeat behind them and get the results they really ought to get from the games that remain, then a top-six finish should still be theirs. That would be a truly remarkable achievement, with the fact it leaves Spurs in their wake only adding to the pleasure for Hammers fans. Seventh and the Conference would still be extraordinary.

Eighth, though, would now have to class as a major disappointment. While it still represents progress and would have been a hugely satisfactory outcome when the Hammers were losing their first two games of the season on the back of last year’s scrap at the foot of the table, the fact is that objectives and goals shift and change as the season takes shape.

To West Ham’s credit, they have shifted those expectations more than anyone could ever have envisaged. The biggest prize has now gone, but they still have a wonderful opportunity to give their season and football the tangible reward it deserves. But there can be no repeat of this disappearing act.