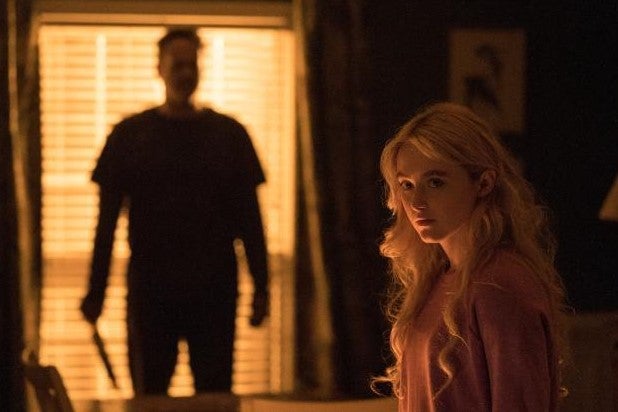 I’ve covered many film premieres over the years — grand affairs with red carpets packed with guests and reporters clamoring to score face-to-face interviews with talent before the screening begins.

But the coronavirus pandemic has changed all of that.

The world premiere of “Freaky” — the upcoming horror film from Universal/Blumhouse — may have lacked the glamour of a traditional red-carpet premiere event, but not the excitement.

Last Thursday, the slasher comedy debuted during the final night of Beyond Fest — this year a drive-in only event amid the ongoing pandemic.

It took me 90 minutes to drive 50 miles to Montclair, California — the same amount of time it would have taken me to go from my Westside office to Hollywood for a “regular” premiere. I was joined by a friend, who like me, is a self-described horror fan. I had tested COVID-negative the week prior and we donned masks any time we set foot outside the car, as mandated.

The lot was already about 80% full when we pulled in (organizers said the two-week Beyond Fest drew over 5,000 attendees this year). Cars parked in a checkerboard pattern to encourage social distancing. As the temperature dropped into the 60s — cold for California — guests made their way to the only lit structure in a pitch-black parking lot — the snack bar. The young stars of “Freaky,” masked and incognito, huddled together for one last bathroom break before the film started.

As the Beyond Fest logo dimmed, you could hear the sound of feet scurrying over gravel as guests returned to their cars and slammed shut their doors.

With my just-purchased nachos precariously resting on the dashboard, I scrambled to find the right radio station to hear the track. The sound was fine, but my car’s digital display was alit and brighter than someone’s cell phone in a regular theater. I quickly improvised, grabbed a black gaiter that I used as PPE and blocked out the light from the display.

After a quick welcome from the Beyond Fest organizers, stars Vince Vaughn and Kathryn Newton along with director Christopher Landon, delivered a pre-taped message. “This movie is really special to me because we made this movie for a Beyond Fest crowd,” Landon said. “I feel super humbled and honored to share this movie with you in this particular venue, under the stars, all of us together, people who love [the] genre.”

“It’s going to be awesome!” Landon added, as the screen faded to black and guests honked their car horns and flashed their headlights in anticipation.

Genre fans are well-known for their enthusiasm, so not being able to hear their responses to the film’s “Oh, s—” moments was missed (guests did honk their horns during a particularly gratifying kill scene).

However, there was something intimate about sharing the same physical — albeit distanced — space with the rest of the audience (including the cast and crew) that a virtual gathering couldn’t replicate. And some of the tensest moments in “Freaky” were heightened when I caught the silhouette of a security guard wandering around out of the corner of my eye.

And although it had been more than half a year since I last stepped into a theater, it felt like a moviegoing experience where I had to turn off my devices, stay in my seat and balance my food and drink. I half-covered my eyes during “Freaky’s” gory kills, laughed out loud at the pop culture references and vocally cheered for the heroes — something I’d do in a theater.

After months of watching video on nothing larger than a 43-inch screen, it felt good to be back at the movies.