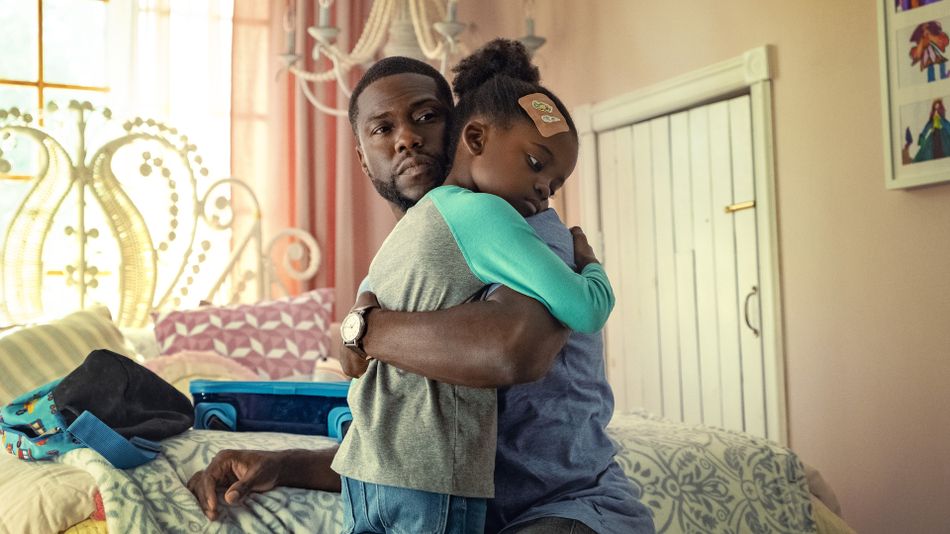 Fatherhood starts out looking like a real tearjerker: We open on a funeral for a woman who’s died shortly after giving birth, leaving her devastated widower to raise their baby girl alone. This terribly sad premise (which is based on a memoir by Matt Logelin) is made even sadder by brief flashbacks to the days just before, when life for this family looked bursting with joy and promise, and it’s hard not to get choked up when reality sets back in and we’re left once again with Matt (Kevin Hart) facing the dual terrors of fresh grief and new parenthood.

In truth, though, it doesn’t take that long for Fatherhood to reach the much milder emotional equilibrium that will define the rest of the movie. Director Paul Weitz, whose About a Boy (which he directed with Chris Weitz) struck such an ideal balance between sappy and sincere, resists the temptation to lean too hard into either the laughs or the tears. The result is a movie that’s almost relentlessly pleasant on the one hand, and largely unmemorable on the other.

Its best moments are the ones that are allowed to just breathe, as when Matt’s friends (Lil Rel Howery and Anthony Carrigan, both professional scene stealers) step up in their own goofy but well-meaning ways — harmonizing lullabies to help a baby Maddy fall asleep or trading chips for cookies in their poker games so Maddy can join in. And Hart’s tender performance, so different from his usual over-the-top comic persona, gets plenty of space to shine, particularly in the second half as Maddy grows into elementary school age (the lovely Melody Hurd) and Matt into a more comfortable parenting routine.

The result is a movie that’s almost relentlessly pleasant on the one hand, and largely unmemorable on the other.

But Fatherhood can’t help teetering toward clumsy conflicts. In Maddy’s infancy, Matt brings her to the office every day until his boss (Paul Reiser) suggests he hire a babysitter; while there’s certainly an argument to be made that offices should be more parent-friendly or parental leave more generous, Fatherhood seems to be taking the rather stranger stance that it’s simply never occurred to Matt, who seems to enjoy a cushy career doing something vaguely tech-related, to look for child care.

Once Maddy’s enrolled in Catholic school, she starts getting into trouble for her insistence on wearing boys’ underwear and trousers instead of the strictly mandated skirts. It’s a slightly awkward subplot to begin with, given that it doesn’t really go anywhere. But it’s made distinctly sour by the choice to cast Hart — who famously lost a dream job hosting the Oscars over his refusal to apologize for past homophobia, and still seems salty about it — as the saintly supportive dad to a kid who doesn’t conform to gendered expectations.

Most egregiously, there’s a third-act crisis that drastically raises the stakes for Matt and Maddy, but seems to come out of nowhere. Properly setting it up would have required acknowledging imperfection or ambivalence on Matt’s part, or perhaps digging deeper into Maddy’s initial uneasiness when a new girlfriend, Swan (DeWanda Wise, totally winning) enters the picture. But Fatherhood seems reluctant to portray Matt as anything other than a perfect dad whose only real flaw is caring too much, and his home with Maddy as anything other than a perfectly blissful and loving one.

And everywhere, there are moms. Not dads — moms. Fatherhood makes a point of showing how low societal expectations are for dads: When, early on, Matt’s own friends and family doubt his ability to raise Maddy alone, we automatically understand that his late wife, Liz (Deborah Ayorinde) wouldn’t have gotten the same skepticism if he’d been the one who died. Everywhere he goes, strangers ask where Maddy’s mom is, or try to direct him away from parents’ meetings because he can’t possibly be in the right room, or fret about Maddy’s lack of a female role model.

But Fatherhood itself does little to change the idea that moms are the default parent. It’s Matt’s mother (Thedra Porter) and mother-in-law (Alfre Woodard, always welcome but underused) who do the work with him in Maddy’s first days, while his father-in-law (Frankie R. Faison) keeps to the background as a benevolent but aloof presence. It’s a female coworker tasked with watching Maddy when Matt needs to go into a work meeting. And when he finds himself unable to care for Maddy, it’s his mother-in-law he correctly assumes will pick up the slack, no questions asked. Meanwhile, Matt rarely interacts with other dads at all. One of his closest friends is the father of a kid about Maddy’s age, and even he’s barely seen doing any parenting.

In fairness to Fatherhood, it’s not the film’s fault that society at large still sees competent, caring dads like Matt as anomalies, and it goes out of its way to point out how unfair that is to fathers. But the film implicitly reinforces that viewpoint by positioning Matt as singular and unique in his devotion to his daughter. Fatherhood works just fine as a sweet little celebration of Matt and Maddy, of the beautiful life they’ve built together from the ruins of tragedy. But as an exploration of fatherhood itself, it’s as deep as a drugstore Father’s Day card.

Fatherhood is streaming on Netflix.