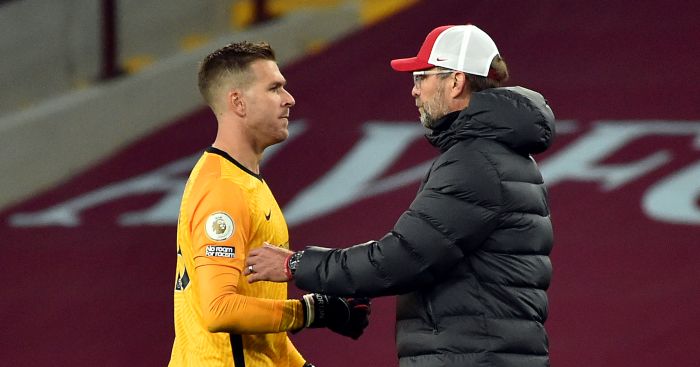 Liverpool boss Jurgen Klopp has insisted that he is not interested in signing a new goalkeeper before the domestic transfer deadline.

The Reds are currently without their number one goalkeeper Allison. The Brazillian picked up an injury ahead of their game against Aston Villa last week.

It was revealed that his injury will keep him out of action for four to six weeks. He will definitely miss Liverpool’s Merseyside derby against Everton on October 17.

F365 Features: The ‘perfect’ Premier League XI of the season so far

Without him, Adrian replaced him in goal against Villa. It proved to be an embarrassing night for the Premier League champions, as they lost 7-2 to Dean Smith’s side.

This has fuelled rumours that Klopp wanted to bring in a new goalkeeper to compete with Adrian while Allison is out injured.

Football Insider reported earlier this week that Liverpool were ready to make a move for Stoke City goalkeeper Jack Butland.

The England international has spent the last two seasons with Stoke in the Championship. He has been regularly rumoured with a return to the Premier League, but a move is yet to come to fruition.

Despite these rumours, a contradictory report has now emerged. The Mirror’s David Anderson has revealed that Klopp has no interest in signing Butland or any other ‘keeper.