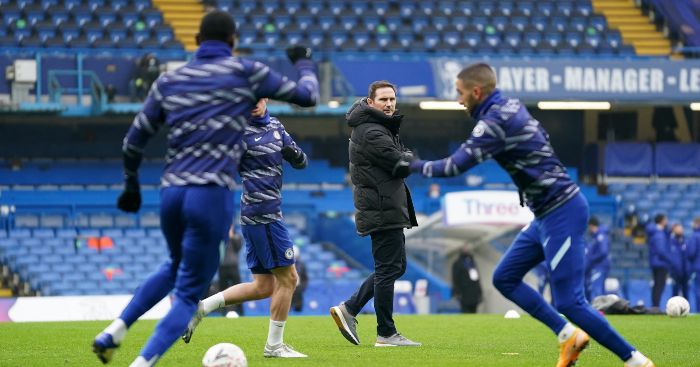 Frank Lampard says Chelsea have had a “really physical” couple of weeks of training, in which they’ve had an opportunity to work on “the bigger elements” of their game.

Chelsea will face Fulham at Craven Cottage on Saturday, with the Premier League clash having been pushed back a day due to the hosts’ coronavirus outbreak.

Fulham forced a 1-1 draw at Tottenham on Wednesday night, with that rearranged clash leading the Premier League to push their Chelsea encounter back by a day.

Chelsea have struggled over the Christmas period, with just one win in their last six in the Premier League.

Lampard continues to graft hard to assimilate all his £220million-worth of summer recruits at Chelsea, and admitted the last fortnight has allowed an extended chance to drill down into tactical detail.

“We’ve had good work on the training pitch, that’s been a positive of the two weeks,” said Lampard.

“It’s been the first two weeks where we’ve been able to work through a week at a really physical level, which is important if you want to improve as a team.

“The players have been focused since the Manchester City game. We were expected to beat Morecambe and we did, and after that the main concern has been training and the atmosphere around it.

“When you’ve had a few games where you don’t win it’s clear the players need to stay positive.

“So I’ve seen good reactions from the players in those terms, the players have worked hard.

“It’s the first chance this season we’ve had to work on the bigger elements of our game.

“So that’s been one positive out of the last two weeks, and now our players need to show that.”