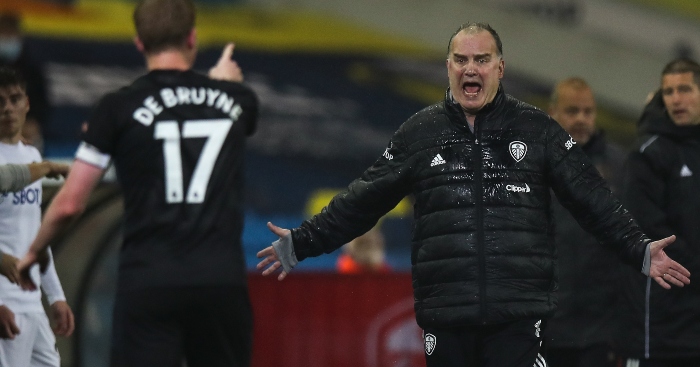 Leeds boss Marcelo Bielsa claimed his side did not deserve to win after drawing 1-1 with Manchester City in another Premier League thriller.

Raheem Sterling fired City ahead early in the first half and Leeds’ £27million record signing Rodrigo turned home an equaliser in the second period.

Bielsa’s side were in danger of being overrun in the first half-hour before finding their feet and taking the game to City after the interval.

“We had to find an immense physical effort to be able to be on even terms, or slightly better than City for half a game.

“And we had to survive the beginning of the first half and the end of the second half.”

Kevin De Bruyne’s 30-yard free-kick hit a post in the opening exchanges as Pep Guardiola’s side camped in Leeds’ half, while Rodrigo also saw two efforts hit the woodwork, his second superbly turned on to the crossbar by Ederson.

“We played our part for the game to be a beautiful one and City also played a huge part in making the game beautiful,” said Bielsa, whose side moved up to fifth in the table.

“They’re a very powerful team. Physically, mentally and technically. They play with a natural inclination to attack and are the type of team that goes out to win the game.”

Rodrigo, a 56th-minute substitute for Tyler Roberts, had a telling impact on the game to edge closer to a regular starting place.

“Progressively he will begin to show the great quality that he has,” Bielsa added. “Today he had a very good start and perhaps the pace of the game hit him at the end.

“When he’s able to play at a good physical level I think he will make a difference.”

noBig Weekend has branched out to the big screen to preview Batman v Superman. Please do give it a watch, a like and a share after subscribing, you little scoundrels.