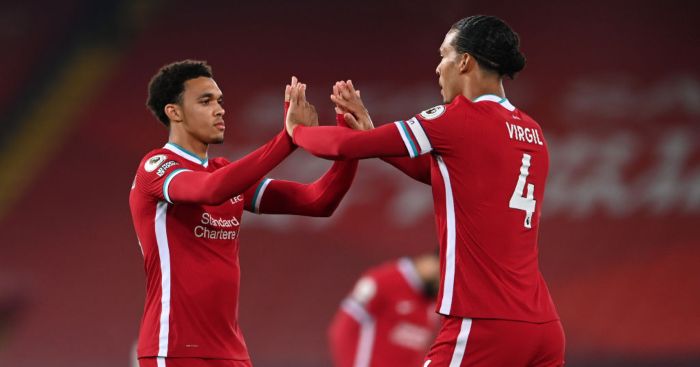 ‘Jurgen Klopp has insisted he will not over-react to an injury crisis that has ripped the heart from his team.

‘Speaking ahead of the top of the table clash with the Gunners – who have beaten Liverpool in their last two meetings – the German coach said that he is happy with his squad and will not panic, despite injuries down the spine of his team.

‘In particular, he has two centre halves and two central midfielders injured, which leaves the squad dangerously exposed with such an intense fixture list.’

Liverpool then beat Arsenal 3-1 with a team missing only Jordan Henderson from the team that strolled to the Premier League title.

‘Liverpool delivered an ominous message of intent to their title rivals with a display of controlled power at Anfield.

‘Their belief is frightening, and so is their brooding presence level on points at the top of the table.’

In amongst Dave Kidd writing in The Sun that Liverpool winning the title is a ‘foregone conclusion’ (it’s hard to argue), he examines Arsenal’s tactics.

‘This was always going to be the ultimate test at a ground where the Gunners have regularly been shredded in recent years.

‘Perhaps with that in mind, Mikel Arteta opted for a five-man defence and two holding midfielders, determined to be difficult to beat.’

Pesky fact: They lined up exactly the same way at Fulham on the opening day.

While Dave Kidd was busy handing the title to Liverpool, his Sun colleague Charlie Wyett was writing a BIG MATCH VERDICT that aimed to bring Arsenal’s ‘giddy’ fans back down to earth. For he seems to be labouring under the illusion that Arsenal fans were convinced they would beat a team unbeaten in the Premier League at Anfield in over three years, having finished 43 points behind them just a matter of weeks ago.

‘A reminder to some of their fans still giddy after their FA Cup success over Chelsea that they are still a considerable distance behind English football’s heavyweights.’

Hmmm. Pretty sure it is possible to be pleased about winning the FA Cup and know that you will not win the title any time soon.

‘The problem is Arsenal were the eighth-best team in the Premier League and finished 43 points behind Liverpool last term, so the gap will not be completely closed any time soon.’

Does Charlie feel the need to issue similar warnings to all the other Premier League clubs who are worse than Liverpool, or is it just Arsenal who need putting in their place?

‘PEP GUARDIOLA is poised to take his spending on defenders alone to around £390 million,’ wrote Martin Blackburn on The Sun website on Monday afternoon. ‘Benfica’s Portugal international centre back Ruben Dias is expected in Manchester later to complete the formalities on a £64.5 million deal.’

But obviously, if you want to splash ‘PEP’S £400M ON DEFENCE’ across your back page, you have to find a few more quid for that total, so magically, the newspaper version of the same story tells us ‘PEP GUARDIOLA is poised to take his spending on defenders past £400million with the signing of Ruben Dias’.

Silly Martin for not initially including Oleksandr Zinchenko (not signed as a defender), Philippe Sandler (joined aged 20), Angelino (signed because of a low buy-back clause and now on loan elsewhere) and Issa Kabore (never actually played for City and on loan at Mechelen) in his calculations.

£400m? That’s amateurish stuff; the Daily Mirror have a graphic claiming that City have spent a total of £432.65m on defenders under Pep Guardiola. After all, who could forget Pedro Porro, Yan Kouto and Ko Itakura, all of whom might never actually play for City?

Let’s play a game of ‘what’s more ridiculous?’ as we peruse Stan Collymore’s column in the Daily Mirror.

a) A headline of ‘We need a return to laws of 20 years ago’ above a picture of Billy Bremner, who last played at the highest level 45 years ago?

b) The call for the game of football to ‘row back to the rules we had 10, 15 or 20 years ago. When handballs had to be deliberate and when players were actually allowed to tackle, even from behind provided they won the ball’, when such tackles were actually outlawed 22 years ago?

c) The opinion that Declan Rice ‘needs to get out of West Ham now’ and join a club with a ‘cracking young manager’ just a few days after Chelsea had to come back from 3-0 down to draw 3-3 with West Brom while the Hammers battered Wolves?

d) The idea that Liverpool should sign Dele Alli (they ‘could do much worse’, apparently, which is exactly how Michael Edwards operates), who would cost at least £70m and plays in a position that does not exist at the reigning champions?

‘Transfer news LIVE: Man Utd prepare fresh Sancho bid as Blades’ Brewster bid hits snag’ is quite the headline on the Mirror website. A ‘fresh bid’ you say? The Guardian – among others – say that no bid has been made at all and now you are telling us – LIVE, no less – that there is a ‘fresh bid’ being made.

‘Manchester United have not given up hope if doing a deal for Jadon Sancho before deadline day.

‘The English club are preparing a take-it-or-leave-it bid for the Borussia Dortmund forward.’

We click through to a story that tells us this:

‘Manchester United have not given up hope of clinching a deal for Jadon Sancho before deadline day.

‘That’s according to the Daily Star, who report that the English club are preparing a take-it-or-leave-it bid for the Borussia Dortmund forward.’

The offer will reportedly be worth £75m plus £15m of add-ons. Which is different from the £65m plus add-ons that we discussed in Mediawatch on Monday. This is from the Daily Star, though there is no link to click so we have to find said story ourselves.

And here it is. From Thursday.

Whistle as you work

Recommended reading of the day

Recommended watching of the day