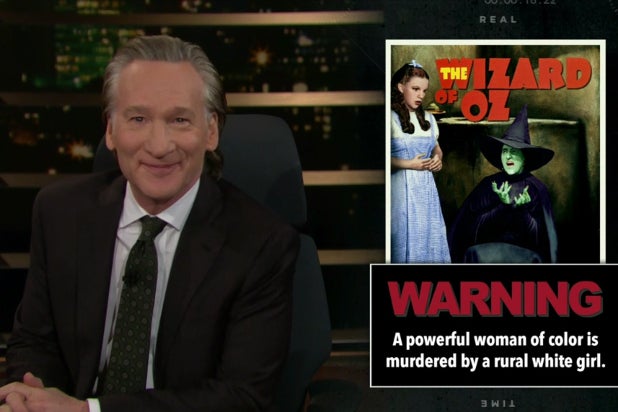 For the mid-show gag on this week’s “Real Time,” Bill Maher drew inspiration from TCM’s decision to add new introductory segments to several classic films that address problematic elements like racism or sexism, and attempt to put those elements in historical context. (The films aren’t themselves being altered, and they’ll continue to air on TCM.)

Maher thinks adding those content warnings is a bit silly, and to make that point he introduced content warnings of his own for several other classic films. And while the jokes were pretty amusing, we have to say the warnings Maher came up with are also extremely accurate.

“And ‘Gone with the Wind’ is on the list. ‘Breakfast at Tiffany’s,’ ‘My Fair Lady’… ‘My Fair Lady’ is too rough for them?” Maher continued, joking that the latter film “was too corny for me when I was ten. My father wanted me to go see it. I wouldn’t.”

Maher added that these weren’t the only movies getting warnings, and then introduced several of his own. We’ll list them below for your convenience:

“‘Sleeping Beauty’: A prince kisses an unconscious woman without consent.”

“‘The Wizard of Oz’: A powerful woman of color is murdered by a rural white girl.”

“‘Psycho’: Inaccurately portrays the lives of the vast majority of transgender motel owners.”

“‘The Graduate’: Depicts a problematic age discrepancy that you can’t blame on the man.”

“‘The Greatest Story Ever Told’: Yes warning, portrays in a positive light of power imbalance between Mary, a Palestinian teenager and God, a more powerful man.”

Like we said, jokes aside, those are pretty accurate. Anyway, watch the clip above.