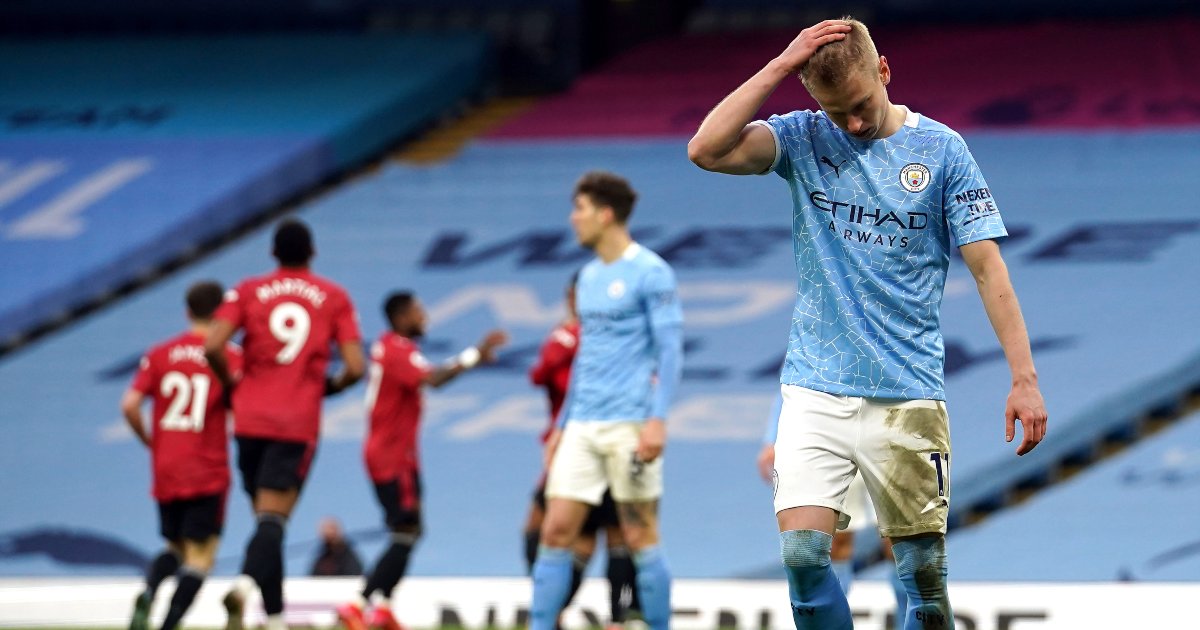 It might all be over for Man City after that…

So obviously this is what Dave Kidd writes in The Sun:

‘United’s victory is surely too late to reopen the title race but it evaporated the idea of City strolling imperiously towards a Quadruple.’

Yep, forget that 21-match winning run and 28-match unbeaten run; that’s all gone now and the notion that City could stroll to a Quadruple has literally ceased to exist. It’s turned from liquid into vapour. Gone.

OMEN
Kidd is not alone in thinking that losing a game to Manchester United might somehow make Manchester City’s season fall apart. Over to the Daily Mail:

‘City are desperate for Champions League glory but was derby defeat… A BAD OMEN?’

A bad omen? They lost a match and it’s never nice to lose a match but they had won their previous 21. And 21 is really rather a lot. You might be surprised to learn that other teams have lost matches this season – European champions Bayern Munich, for example – and their whole season has not summarily fallen apart. And quite specifically, losing one game in one competition is rarely considered a ‘bad omen’ in another. Because that would be weird.

But Ian Ladyman is on a mission. Now you might point out that a whole three days ago he was on a different mission: City were on the verge of ten years of dominance. Here are a few highlights from that column:

* ‘City will win this Premier League by a distance. If the margin is less than 20 points, it will be a surprise.’

* ‘This could turn out to be City’s time more than any other.’

* ‘For all Guardiola’s public caution, this should not be a time to think only of this title but also the next one and the one after that.’

* ‘So while Guardiola continues to speak respectfully about teams like United and look only with supposed caution into the future, it is not hard to guess what a serial collector of football trophies really thinks.’

* ‘We have said this before and been wrong but City might just be standing on the threshold of what they have always wanted.’

One derby defeat later – helped by the concession of a penalty less than one minute into the game – and City stand not on the verge of dominance but of despair.

‘So this defeat by Manchester United — particularly in its meekness — feels badly timed. City had won their previous 21 games. Their football in recent weeks has been imperious. But this was a malfunction of the machine startlingly similar to the one suffered against Lyon. It was a reminder of what can happen.’

‘This season’s Champions League is up and running again after its winter break. City are midway through a two-leg tie against Borussia Monchengladbach and have a two-goal lead. They are as good as in the last eight already.

‘Beyond that, though, Guardiola will know that tougher opponents await but so do opportunities. Barcelona — much diminished these days — are on their way out. Liverpool are all over the place.

No team in Europe is unbeaten. But no other team in Europe has won 21 consecutive games this season. City may well fail to win the Champions League but only a fool would look back on defeat to United in March when 14 points clear as some kind of prophecy.

Blow job
The giddiness about Manchester United beating City across the tabloids is really quite something, with the Daily Mirror back page going with this headline…

On p55 of the Daily Mirror: ‘A derby win does not carry a job security guarantee but finishing in the top four does. And United should not blow it from here. Never mind bragging rights – that is the most meaningful ramification of this surprise victory.’

Domination
‘The win also stretched United’s unbeaten run away in the League to 22 games although, when they can dominate like this, fans are entitled to ask why they cannot win more on the road’ – Daily Mirror.

Question: Can you ‘dominate’ with 34% possession if you take eight shots to your opponents’ 23?

The man, the myth
Obviously, we are being obtuse because this was a tactical masterclass from Ole Gunnar Solskjaer. Or at least that is what the Mirror website would have you believe:

There was no change of personnel or formation at half-time, so what was this ‘tweak’? And while we’re at it, what is this ‘myth’?

‘Solskjaer has often faced criticism of his managerial ability, with many feeling he isn’t a strong enough tactician.

‘But with just one half-time tweak to his side’s system, he dispelled those suggestions.’

Yes, all the suggestions – strengthened by a run of three 0-0 draws – ‘dispelled’ in just one half-time tweak. Let Solskjaer himself talk you through this moment of genius.

“I thought we were excellent in the first 10 or 15 minutes, then settled into our shape, because we played too much on the result.

“We adjusted that at half time to be more positive again and the second goal was incredible.”

How the hell did he even come up with that plan? Mediawatch will never, ever doubt him again.

Rash decision
Over on The Sun website, they give Marcus Rashford 6/10 for his efforts:

‘Started the first half brightly, but like most of his team-mates had to sit and watch City control possession.

‘Replaced by Greenwood after picking up an injury in the second half – was a quiet game for the school dinners hero.’

Did somebody miss the second goal?