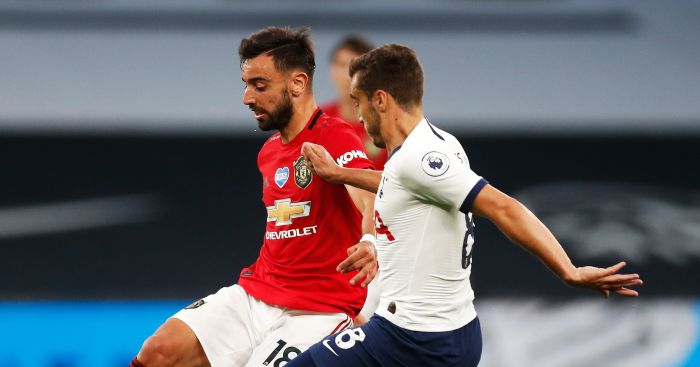 The 1-1 draw between these two sides in June gives a solid indication of the tactical pattern we can expect on Sunday. Both Jose Mourinho and Ole Gunnar Solskjaer prefer to play on the counter-attack, struggle to create clear-cut chances when their forwards are denied the space they need to improvise, and sit in a particularly cautious defensive shape when facing a ‘Big Six’ team. That points to a fairly disappointing game for the neutral.

The most important feature of their last meeting was Tottenham’s off-the-ball shape. Their three central midfielders formed a line in between the Man Utd forwards and midfielders, Steven Bergwijn and Heung-min Son squeezed in from the sides and Harry Kane sat at the tip, just in front of the Man Utd midfield. Together, these five players formed a pentagon shape around Fred, Scott McTominay and Bruno Fernandes, leaving Victor Lindelof and Harry Maguire to hold as much of the ball as they liked.

Given that Solskjaer doesn’t coach intricate attacking patterns, this inevitably left Man Utd static: Maguire and Lindelof were forced into low-tempo passing out to the wings, and when Spurs shuffled across, the ball went straight back again. It was achingly dull U-shape football from the back as Fernandes was surrounded and the Man Utd front three were cut off. Even at Old Trafford, that Mourinho shape should work again.

Mourinho expects Tottenham’s quick forwards to hurt the opposition on the counter, which explains why his team only really plays well when faced with a high line (e.g. Southampton), struggling to create much of note against a deeper shell (e.g. Newcastle).

And so if the above system leads to Man Utd steadily probing more aggressively, pushing the full-backs on and spreading wider in search of progressive passes into the final third, then opportunities could open on the counter-attack for Spurs. Harry Kane is without a doubt the key player in this zone, following his incredible performance in the 5-2 destruction of Southampton a fortnight ago.

Kane has always thought of himself as a creative striker, hence the No. 10 shirt, but while Mauricio Pochettino sought to limit this part of his game Mourinho is letting Kane flourish between the lines. That is the plus side of hiring a manager who expects his forwards to freely improvise; the best players will seek out the spaces that make them most comfortable and most effective.

Against Saints he continually dropped off, received the ball, and pinged through balls to Son and Lucas Moura as they made runs on the shoulder of the centre-backs. Given that Maguire and Lindelof both lack pace and agility – Crystal Palace managed to pull them wide and isolate them in the 3-1 win a fortnight ago – Kane, Son, and Lucas should be able to hurt the hosts.

3) Can Martial and Rashford hit the gap behind Doherty?

But this won’t be a game of attack versus defence, of Man Utd possession versus Tottenham counters. It will be an even split thanks to the caution of both managers, which means we need to look at what will happen when Spurs are building out from the back.

During sustained periods when Tottenham are in possession they will move to a back three, a consistent ploy of Mourinho’s since his appointment last year. Ben Davies tucks inside to join the centre-backs and Matt Doherty moves forward to become an auxiliary winger, replacing Lucas as he dips into the half-spaces. This presents Man Utd with an area to target.

Marcus Rashford and Anthony Martial could excel in the left-hand space vacated by Doherty, particularly if Man Utd notice this issue early on and look to hit their forwards with longer balls into the channel. There is certainly a potential mismatch here should a Spurs move break down and Man Utd find the space to launch a counter-attack.

The standout feature of Tottenham’s opening game of the season (their only match against a top side so far in 2020/21) was James Rodriguez controlling the tempo from the right wing. The Colombian found it far too easy to drift off his flank and dominate the game in central attacking midfield, that simple movement seemingly confounding a Spurs midfield that was too flat and functional.

Mourinho demands his players stick to a rigid shape, which can mean they are caught flat-footed and unable to track runners that weave between different zones of the pitch. It is plausible, then, that Bruno Fernandes can be similarly commanding if he plays with the energy and purpose that defined his first few months at Old Trafford.

5) Can Pogba raise his game or will Lo Celso make the difference?

But the Spurs pentagon will be focused primarily on Fernandes, and as much as he probed opposition defences last season he wasn’t necessarily one to pop up in unexpected areas of the pitch. And so in a tight, cagey game in which neither manager will want to commit men to attack nor be upset with a point, it could ultimately come down to one moment of magic from either Paul Pogba or Giovani Lo Celso.

Pogba has endured a dreadful start to the season, getting subbed off against both Crystal Palace and Brighton after failing to create a single chance, but is still expected to start on Sunday after Donny van de Beek and Scott McTominay played 90 minutes in the EFL Cup. Lo Celso looked lively in his first start of the season against Newcastle, but like Pogba is yet to record a goal or assist this season.

Both need to step up if we are to avoid a dull 90 minutes at Old Trafford.