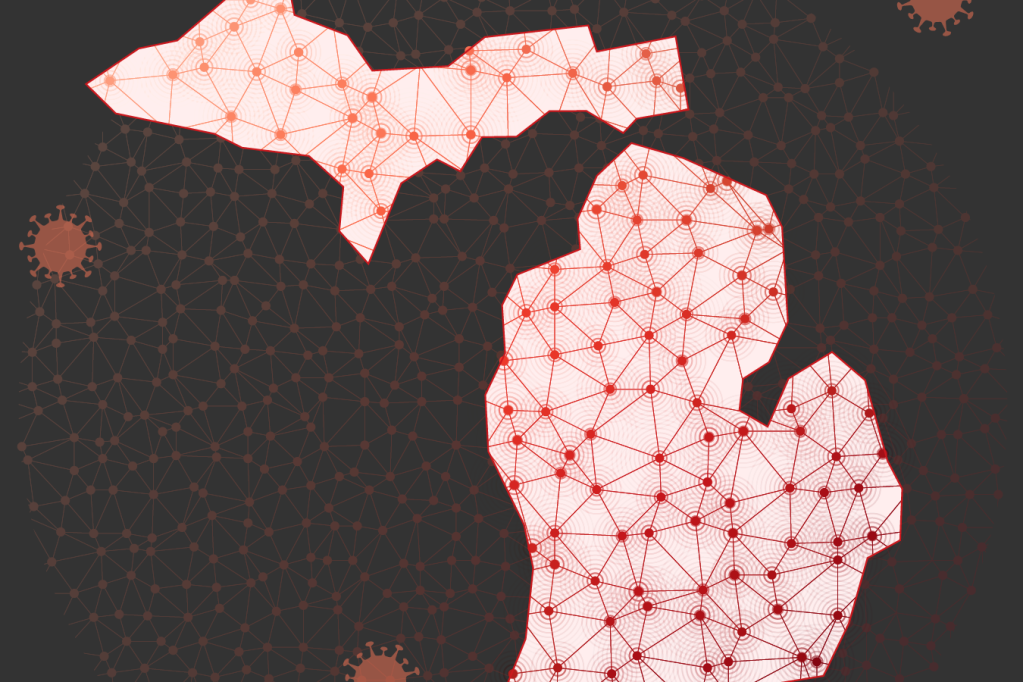 When Kathryn Watkins goes shopping these days, she doesn’t bring her three young children. There are just too many people not wearing masks in her southern Michigan town of Hillsdale.

At some stores, “not even the employees are wearing them anymore,” said Watkins, who estimates about 30% of shoppers wear masks, down from around 70% earlier in the pandemic. “There’s a complete disregard for the very real fact that they could wind up infecting someone.”

Her state tops the nation by far in the rate of new covid cases, a sharp upward trajectory that has more than two dozen hospitals in the state nearing 90% capacity.

The nation is watching.

Michigan’s outbreak could be an anomaly or a preview of what will happen in the nation as it emerges from the pandemic. Will pockets of covid denialism and vaccine resistance like that in Hillsdale — where the local college newspaper ran an opinion piece against the shots — serve as reservoirs for a wily virus, which will resurface to cause outbreaks in nearby cities and states?

“That’s a million-dollar question right now,” said Adriane Casalotti, chief of government and public affairs for the National Association of County and City Health Officials. “Whatever is going on there could happen in other places, especially as things start to reopen.”

Some public health experts are alarmed: “In more rural or conservative communities where covid denialism and the behavior that comes with that is coupled with vaccine hesitancy, you’re less likely to get vaccinated and more likely to do things that spread the virus,” said Dr. Abdul El-Sayed, the former executive director of the Detroit Health Department and now a senior fellow at Harvard’s T.H. Chan School of Public Health.

Multiple factors contributed to Michigan’s outbreak — El-Sayed calls it “a cauldron of bad dynamics.” But its magnitude is unparalleled, even as other states are also seeing increases, attributed in part to challenges like pandemic fatigue and political and economic pressure to fully reopen.

Deaths from covid in Michigan are up 219% since March 9, weekly state data shows. Hospital admissions are increasing, affecting a growing number of young people. Positive test rates are at their highest levels since last April. Dozens of outbreaks, including clusters related to youth sports, K-12 schools and colleges, are ongoing. If there is any good news, it’s that the proportion of deaths among those 60 and older is declining, which is attributed to a high vaccination rate among that age group.

Fueling the trajectory in Michigan, experts say, are a highly contagious variant, first identified in the United Kingdom, known as B 1.1.7; public mobility returning to pre-pandemic levels; and optimism about vaccine rollout, leading people to drop their guard. The state, like some others, also loosened restrictions in March, allowing more people inside restaurants, gyms and entertainment venues.

Paradoxically, some experts say another factor may be the success that earlier stay-at-home orders from last year had, helping tamp down previous surges — meaning Michigan’s spike may simply signal the state’s catching up to other regions.

“We locked things down and had fewer cases than neighboring states,” said Josh Petrie, a research assistant professor at the University of Michigan’s School of Public Health. “More recently, since March, we see that steep increase again.”

But those emergency orders, while tamping things down, also fueled a backlash, including a plot by extremists to kidnap Gretchen Whitmer, the Democratic governor who ordered them.

The resistance stretches beyond the capital, Lansing.

About 70 miles south, in Hillsdale County, where Watkins lives, the sharp divisions are complicating the effort to fight the virus.

The semi-rural region, population 45,000, has seen 3,980 cases and 82 deaths since the start of the pandemic. Staunchly conservative, the county voted overwhelmingly for incumbent Donald Trump. Nationally, polls have shown that Republicans are more hesitant to get vaccinated than Democrats or independents.

Statewide, data from the federal Department of Health and Human Services show vaccine hesitancy is high in Michigan, although not the highest in the country.

But in Hillsdale County, an estimated 21% are hesitant, with 8% strongly hesitant, according to the federal data.

Vaccination resistance “does play a role,” said Eric Toner, a senior scholar with the Johns Hopkins Center for Health Security. “We know from research that people’s attitudes toward vaccination are largely influenced by what friends, family and neighbors do.”

Statewide, younger residents have the lowest vaccination rate, with just under 20% of 16- to 19-year-olds getting at least one shot and about a quarter of those in their 20s, according to state data.

In an opinion piece in the newspaper of Hillsdale’s local college, the Hillsdale Collegian, a student editor argued vaccines were “not worth the risk.” But that was soon followed by another piece, also written by a student, urging vaccination.

There have been 323 cumulative covid cases among the approximately 1,500 Hillsdale College students and more than 700 staff members since September. Many other universities and colleges in Michigan are also seeing outbreaks, according to state data.

Unfortunately, resistance to vaccination often goes hand in hand with refusing to wear a mask. Darrel Scharp, 75, a self-described “strong Democrat” who lives in nearby Osseo, said some businesses, are still “celebrating noncompliance,” such as not requiring masks or otherwise flouting rules. His doctor has told him that, sadly, he often “had to argue with his patients about masks.”

Hillsdale’s mayor, Adam Stockford, in July wrote on his Facebook page that he was “furious” that the local health department was warning businesses to comply with the state’s emergency mandates to prevent covid spread. And Hillsdale College held an in-person graduation ceremony last summer, defying the state’s law against large gatherings.

With a Michigan outbreak now in full steam, debate about how to handle the upcoming high school prom peppers the Facebook page of the Hillsdale Daily News. Would holding it in person risk even more viral spread, endangering the most vulnerable?

Oh, great, wrote one sarcastically, “spread covid like wildfire for a party.”

But another responded, “Let them have their proms and graduations haven’t you taken enough from them as it is!!!!!”

In recent weeks, Michigan’s governor has tried to thread the needle. She has noted that a mask mandate remains in effect, and there are capacity limits — expanded in March — for indoor dining, retail and entertainment. Yet, while resisting any mandatory retrenchment, she has asked residents to voluntarily forgo dining indoors at restaurants, keep their children out of in-person school and pause youth activities for two weeks.

That’s a hard message. Said Casalotti: People are being told, “We’re not going to shut down as we did in the past, but we still want you to change your behavior. It takes four sentences to explain. It’s hard to put those levels of decision on people’s shoulders.”