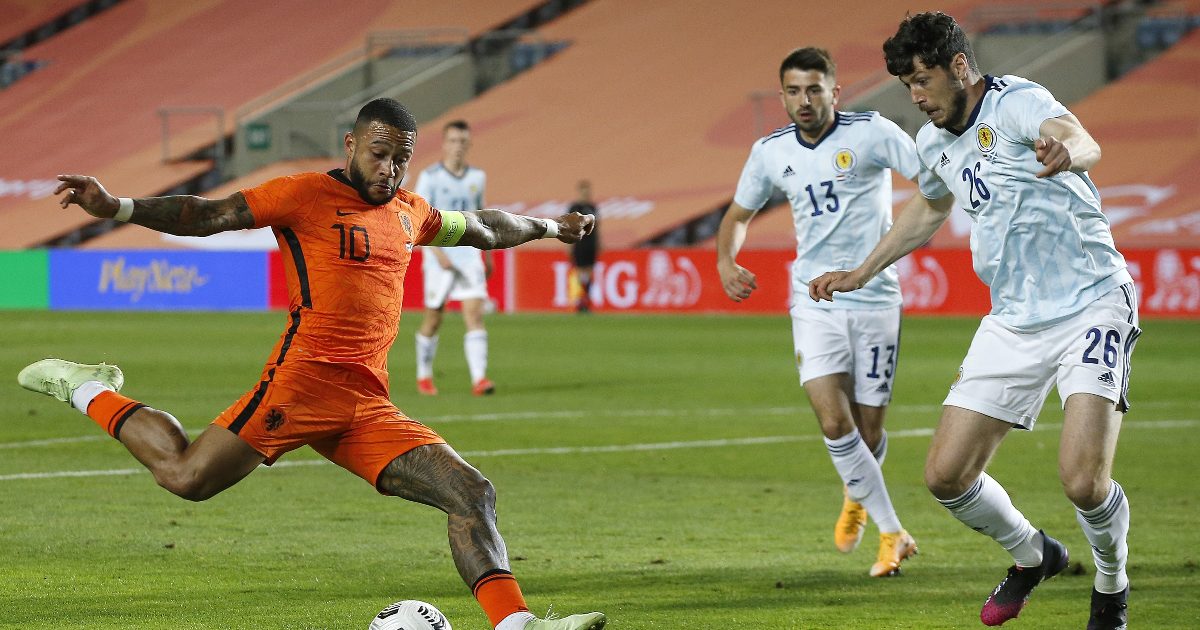 Memphis Depay got his second goal of the game for the Netherlands in the 89th minute to equalise against Scotland.

It was an “ultra cautious” move by the Scotland camp for a Euro 2020 preparation fixture against Frank De Boer’s side but they were far from reticent when defender Jack Hendry drove in his first international goal after 11 minutes of a match played behind closed doors in the Estadio Algarve.

Memphis Depay levelled five minutes later with a drive from inside the box but substitute Kevin Nisbet opened his Scotland account soon after coming on in the second half with a confident close-range finish, only for Depay to equalise again with a minute remaining with a wonderful free-kick.

It was a good workout for the Scots with any result against Holland a positive especially given the circumstances.

Having to reshuffle his pack, Clarke was still left with a more than decent side.

He gave Celtic midfielder David Turnbull his debut, veteran keeper Craig Gordon was between the sticks and he brought in Leeds centre-back Liam Cooper.

Yet it was the Scots’ defenders who caused the early problems for the Dutch.

In the 10th minute left centre-back Kieran Tierney moved up the park with purpose and drove just inches wide from distance.

That was just a precursor to the Scots’ opener. Hendry stepped up as Scotland pressed to prevent Holland playing out from a goal-kick and after gaining possession he drilled in a shot from 25 yards with the assurance of a striker.

Clarke’s side were boosted and a minute later Dykes drove a shot straight at Dutch keeper Tim Krul.

Just when it looked like the Scots had the upper hand they dropped their guard and conceded when Holland skipper Georginio Wijnaldum headed back to an unmarked Depay, who steered a terrific shot from 16 yards past the diving Gordon.

Moments later, skipper Andy Robertson’s delicious cross from the left was dispatched by Nisbet, with the Hibernian striker making light work of the finish.

Turnbull then came close with a drive from the edge of the box before both sides made more changes, Tierney and Robertson making way for Greg Taylor and Scott McKenna.

The Scots worked hard to keep the Dutch out, with some nervy moments not least when Gordon made a great save from Patrick Van Aanholt’s deflected shot.

Chelsea midfielder Billy Gilmour came on for Turnbull to make his debut with nine minutes remaining but late on Depay’s brilliant finish from the edge of the box made it honours even.