Relatives of a Togoga injured resident, a village about 20km west of Mekele, where an alleged airstrike hit a market.

An air strike killed at least 43 people in the town of Togoga in Ethiopia’s Tigray region on Tuesday, a medical official told Reuters, after residents said new fighting had flared in recent days north of the regional capital Mekelle.

Ethiopian military spokesman Colonel Getnet Adane did not confirm or deny the incident. He said air strikes were a common military tactic and that government forces do not target civilians.

Gebrehiwet’s house is next to the market was destroyed by Tuesday’s blast.

“We were stepping on them and in their blood,” she added.

Birhan said she was selling drinks around lunchtime when the attack happened. “I am sure it came from the air,” she added. Men use mobile phones to try to reach relatives as Red Cross ambulances are seen on stand by for authorisation to travel to Togoga, a village about 20km west of Mekele, where an alleged airstrike hit a market.

An emergency worker at a hospital in the regional capital Mekele, 30km away, said six wounded people had so far been admitted – including three young children – but that soldiers were preventing others from leaving Togoga.

“There are 45 injured people who are denied access, they risk death,” said the emergency worker.

An ambulance driver said he was also being prevented from driving to Togoga. 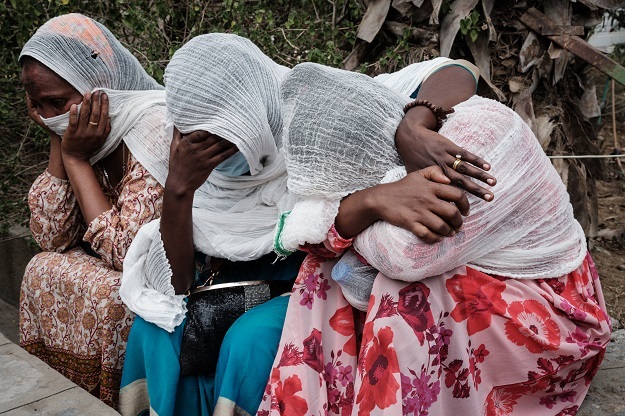 Relatives of Togoga residents, a village about 20km west of Mekele, where an alleged airstrike hit a market leaving an unknown number of casualties.

“I tried to leave Mekele four times today to try and help people, but the soldiers are not letting us go,” he said.

Ethiopian troops, backed by Eritrean soldiers, have been fighting in Tigray since November to oust the renegade regional leadership.

Relatives of one man who was seriously wounded in the attack said he had witnessed two explosions, both fired from aircraft.

Ethiopian officials did not immediately respond to AFP requests for comment about the attack.

On Monday, elections were held across much of Ethiopia but there were no polls in Tigray because of the ongoing conflict which, according to the UN, has pushed 350 000 people to the brink of famine.