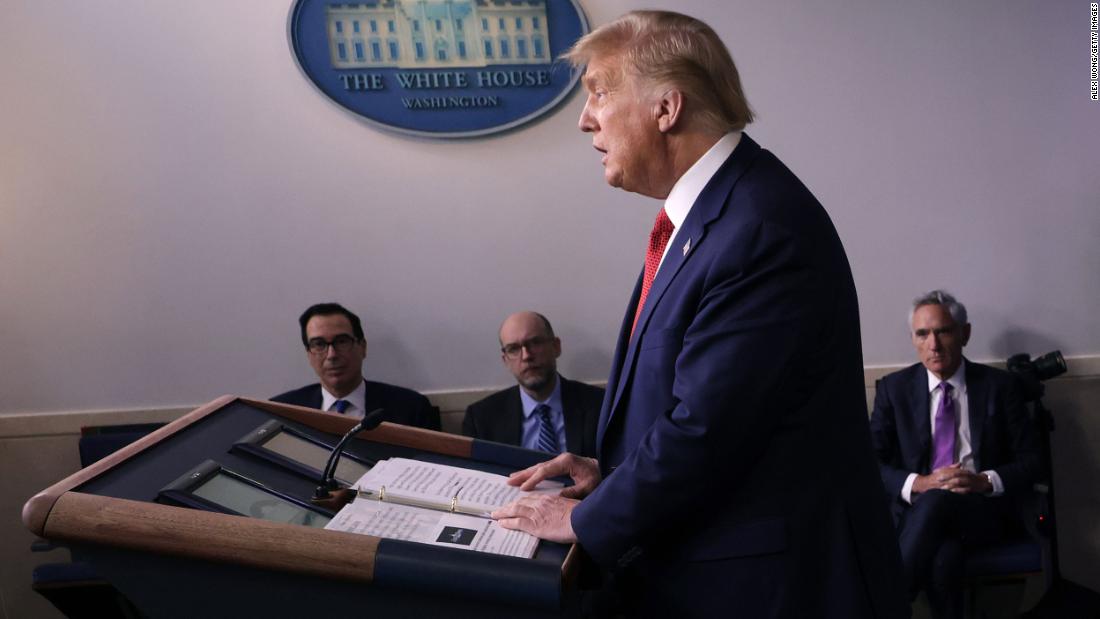 David A. Andelman, Executive Director of The RedLines Project, is a contributor to CNN where his columns won the Deadline Club Award for Best Opinion Writing. Author of “A Shattered Peace: Versailles 1919 and the Price We Pay Today,” and the forthcoming “A Red Line in the Sand: Diplomacy, Strategy and a History of Wars That May Still Happen,” he was formerly a foreign correspondent for The New York Times and CBS News in Europe and Asia. Follow him on Twitter @DavidAndelman. The views expressed in this commentary are his own. View more opinion on CNN.

(CNN)President Donald Trump is having one big success in what is clearly a campaign to distract from Covid-19’s impact on his floundering reelection campaign. Somehow, he’s managed to cobble together a coalition-of-the-willing — nations prepared to follow him over the cliff and participate in a burgeoning anti-China alliance.

Australia, India, Japan, Britain, France and Canada have all squared off against a China that is at the same time flexing its own muscles after apparently beating back the coronavirus that it unleashed on the world.
China has become increasingly expansionist — in trade warfare, propaganda and military exercises. Accusations have ricocheted around the globe.
After US claims of Chinese cyber-espionage targeting Covid-19 treatment and vaccine research, China has issued resolute denials: Foreign Ministry spokesman Wang Wenbin told reporters in Beijing that “sources from the US government have been accusing China of hacking to steal technology and data of US vaccine research, but there has been no evidence whatsoever. Such allegations are pure slander.”
With many pointing the finger at Beijing for cyberattacks against Australia given their timing, Foreign Ministry spokesman Zhao Lijian has also denied the accusations, saying China is a “staunch upholder of cyberspace security” and is “firmly opposed to all forms of cyber attacks.”
Demanding the world adopt a “distrust and verify” posture toward China, Secretary of State Mike Pompeo has taken a leadership role in encouraging what is effectively becoming a new cold war, really the deepest through all the years I’ve been monitoring relations since China’s massacre of dissidents in Tiananmen Square more than 30 years ago.
Chinese President Xi Jinping appears to have long felt that it is time for China really to join the ranks of superpowers. “The days when China can be put in a submissive position are long gone,” observed a commentary in the Global Times, the English-language offshoot of the Communist Party newspaper People’s Daily. “What’s behind China’s perceived ‘Wolf Warrior’ style diplomacy is the changing strengths of China and the West. When the West falls short of its ability to uphold its interests, it can only resort to a hysterical hooligan style diplomacy in an attempt to maintain its waning dignity.”
Now, having largely tamed the spread of coronavirus within its borders and reopened its country internally, China’s leadership has begun to flex its muscles anew, from military maneuvers in the South China Sea to bullying governments in Asia, Europe, the Pacific and North America.
As Mira Rapp-Hooper of the Council on Foreign Relations wrote for CNN recently, the Trump administration seems to prefer “going it alone” against China, doing things like enacting sanctions, reportedly planning to roll back some student visas, and revoking Hong Kong’s special trade status.
Late Thursday night, an order threatening to ban TikTok and WeChat in the US added to the list, and Friday morning, Trump added tough sanctions on Hong Kong Chief Executive Carrie Lam, as well as 10 other Hong Kong and Beijing officials, accusing them of curbing freedoms and undermining Hong Kong’s long and jealously-guarded autonomy. Lam and other officials have publicly criticized the move, as The New York Times reported.
China in turn responded by slapping sanctions on 11 Americans including six US lawmakers: Sens. Marco Rubio of Florida, Ted Cruz of Texas, Tom Cotton of Arkansas, Josh Hawley of Missouri and Pat Toomey of Pennsylvania, and Rep. Chris Smith of New Jersey.
But given China’s actions, there seems to be a willing anti-China coalition, ready to join the US in confronting Beijing. And with such a rare apparent congruity of potentially willing allies, it would seem to be a waste to default to the traditional Trump game plan of solitaire.
It’s worth examining just how this coalition came to be — why and how, exactly, each of these countries has appeared to align itself with America’s view of a rising and assertive China.

Breaking with the United States five years ago to join one of Beijing’s pet projects, the Asian Infrastructure Investment Bank, with an inaugural contribution of more than $670 million, Australia won a coveted free trade agreement with China. That was then.
Now, having demanded a global probe of the origins of the coronavirus, Australia was slapped by China with tough restrictions on vital imports of Australian beef and punitive tariffs on Australian barley imports.
As of July, Prime Minister Scott Morrison hadn’t spoken with Xi in more than a year; senior defense strategists are urging him to send Australian warships into the South China Sea to battle Beijing’s territorial claims.
Morrison plans to recruit 500 cyberspies and to build a nearly $1 billion cyber defense capacity aimed largely at China, The New York Times reported, having already banned Chinese telecom giant Huawei from Australia’s new 5G network, seemingly joining in a boycott that has been a longstanding cornerstone of the Trump campaign against China.
In the wake of China’s new Hong Kong security law, and its provision allowing some accused violators to be tried in mainland-Chinese courts, Australia shares something in common with other countries on this list, including Canada and the UK: It has suspended its extradition treaty with Hong Kong.

Constantly aware of its delicate position in Asia as the world’s largest economic power without a nuclear arsenal — and of its existential need for the protection under the American nuclear umbrella — Japan has had to tread lightly amid the growing cold war.
Still, Tokyo is planning to delay the first state visit of a Chinese leader since 2008, as Foreign Minister Toshimitsu Motegi put it recently, “We are not in the phase of arranging a concrete schedule right now,” The New York Times reported.
And with China flexing its military muscles, sending warships into waters surrounding disputed islands known as the Senkakus in Japan and the Diaoyus in China (which are administered by Japan but contested by China), Japan has launched fighter jets to patrol the area.
As The New York Times reported, Yoshihide Suga, chief cabinet secretary to Prime Minister Shinzo Abe, said the government had “strongly requested” that Chinese ships “stop approaching Japanese fishing boats and quickly leave Japanese territory.” What this meant, he said, was: “We would like to continue responding firmly in a calm manner.”

The first hot-war exchanges of this cold war between China and other countries took place in June across the periodically tense India-China border in the thinly-populated Ladakh region of the high Himalayas, leaving at least 20 Indian border troops and an unknown number of Chinese dead.
The incident was quickly followed by India banning TikTok and scores of other Chinese-owned apps, which technology researcher Jai Vipra observed, writing in Japan’s Nikkei Asian Review, should “be seen in the light of the digital Cold War we are now in the middle of.”
Indian observers have noted a provocative turn in China and, in at least one case, have seen through the prism of Trump’s reelection campaign. “It is quite evident that China will do everything to ensure that President Trump does not return to power in November,” commentator Shishir Gupta wrote in the Hindustan Times, reacting to Pompeo’s recent speech.

The first real indication that Britain was all-in with Trump’s China conflict was its about-face on allowing Huawei a role in its 5G telecom network.
Prime Minister Boris Johnson’s Conservative Party also appears to be having second thoughts on Chinese participation in building sensitive nuclear power stations. [source is the Luke McGee reporting linked at the end of the paragraph] Former British Foreign Secretary Malcolm Rifkind explained the turnaround: “They simply could not have known that under Xi Jinping, China would actually get less liberal and more autocratic. He has become much more brutal, provocative and aggressive,” as CNN’s Luke McGee wrote.
What particularly irked British sensibilities was the Chinese crackdown in the longtime British colony of Hong Kong, leading Prime Minister Boris Johnson to propose offering a right to live and work in the UK for the 3 million Hong Kong citizens eligible for a British National Overseas passport.

At the height of the coronavirus pandemic in France, the Chinese embassy accused French nursing home workers of “abandoning their posts overnight … and leaving their residents to die of hunger and disease.”
This led French Foreign Minister Jean-Yves Le Drian to summon the ambassador to the Quai d’Orsay for a tongue-lashing. It was only the start of a series of tit-for-tat measures that included sharp cutbacks in passenger flights between the two countries. And following other nations’ leads, in July France told its telecom companies it would be banning use of Huawei gear. But not until 2028.

One of the earliest broadsides in the Huawei battle was fired from Canada in December 2018 when it detained Meng Wanzhou, a company executive and daughter of Huawei founder Ren Zhengfei, on an American extradition request, leading China to ban billions of dollars in Canadian agricultural products.
Most recently, it suspended its extradition treaty with Hong Kong and joined an international condemnation of China’s treatment of its Uyghur and other Muslim minorities.
What is not clear from the escalation of the long-simmering US-China confrontation, into a global cold war, is the shape of any end game.
For its part, Beijing appears to be sensing the heightened tension and the value of calming things down: Speaking recently with state-run news agency Xinhua, Foreign Minister Wang Yi said China has “no intention of becoming another United States. China does not export ideology and never interferes in other countries’ internal affairs.”
So far, the Trump administration has failed to take advantage of a growing consensus about China among America’s longtime allies. Instead, Trump has done little to embrace these countries in a fashion that would encourage a joint front.
Trump’s announcement that he will pull nearly 12,000 American troops out of Germany, for instance, was hardly calculated to win the US any new allegiance from France or any other NATO power in this emerging standoff.
Trump’s latest action, cracking down on two of China’s premier apps, WeChat and TikTok — specifically, threatening to ban them in the US in 45 days unless they are sold off to American buyers — is likely to strain relations with Beijing even further and test even more the coalition that Trump had been assembling, apparently with some effect.
It would be appropriate, indeed essential, for both President Trump and Joe Biden to enlighten us on their vision of a path forward, before the next round of escalations puts any peaceful resolution out of reach entirely.