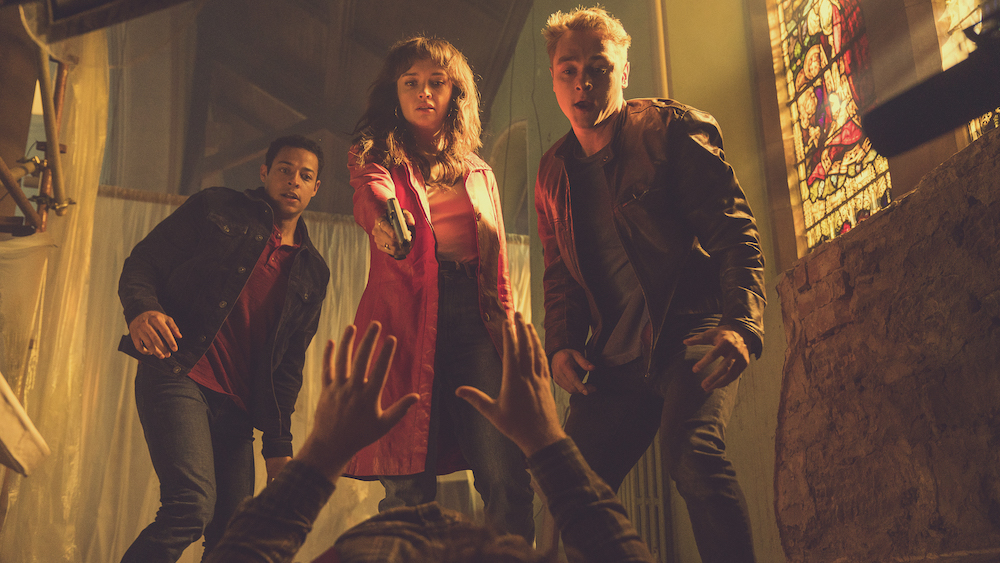 Though there have been occasions to wish he didn’t write so much of it, nobody writes dialogue quite like Quentin Tarantino. We know that because so very, very many have tried, fueling a whole subgenre of blatant “Reservoir Dogs” and “Pulp Fiction” imitations that mercifully began subsiding around the turn of the millennium, but still pop up at least a couple times per year. What they usually have in common is a brash confidence in the wit of their snappy patter and ingenuity of their pretzeling plots — as well as frequently being dead wrong on both counts.

“Pixie” is an Irish tale, and as a result also recalls the screen work of the McDonaugh brothers in their more Tarantino-esque modes. But this collaboration between veteran producer Barnaby Thompson (whose only prior directorial features were the lead-footed “St. Trinian’s” reboots) and his writer son Preston goes beyond homage or aspirational imitation, into the realm of pale, shameless mimicry.

Worse, this bullet-riddled comedy caper set among equally lethal gangsters and priests in Ireland’s picturesque rural West seems absolutely delighted with its own cleverness, in inverse proportion to the amount of actual cleverness to be found. A decent cast and fast pace make “Pixie” easy enough to take as disposable entertainment. Yet it also has that annoying edge unique to films that strike an attitude of rakish sophistication while actually serving up lowbrow quips about prison rape, fat people and menstruation. Saban Films is releasing to U.S. theaters, digital and VOD platforms on March 5.

We meet Olivia Cooke’s titular figure at her ma’s grave, swearing today is the day “we’ll finally set a bomb under this town for what they did to you.” But Pixie’s original plan is undone, as she’s left stewing at the airport, waiting for a no-show companion to board a plane to San Francisco. That has much to do with what happened after her ex-boyfriend Colin (Rory Fleck Byrne) and apparent current one Fergus (Fra Fee) robbed a quartet of priests in incongruous possession of much cash, as well as 15 kilos of MDMA.

Somehow that contraband soon falls into the hands of naive-but-greedy uni students Frank (Ben Hardy) and Harland (Daryl McCormick), which Pixie quickly susses out. Though far more resourceful than either, she decides to keep them on as temporary business partners, as they try to figure out how to liquidate the assets in a hurry without getting killed.

This will be difficult, as various parties are already hot on the trail of the stolen loot, including a goon squad ruled by Pixie’s own IRA gun runner turned commercial crime boss, Dermot (Colm Meany), and the improbable network of “deadly gangster priests” led by Father McGrath (Alec Baldwin). Those two factions have a longstanding grudge match whose uneasy truce this new trouble ends, with Pixie and her new besties caught in the crossfire.

Pixie is meant to be ruthless, fearless, caustic, magnetic, a bit of a possible perv, but also somewhat Manic You-Know-What Dream Girl, apparently all things to all men. “She won’t just break ya, she’ll take a Kalashnikov to yer heart,” one figure opines in one among many labored stabs at repartee here. Cooke handles the part with a breezy, bemused, wised-up appeal. Still, she hardly seems “all that,” and the fault lies far less with the performer than with a character whose superficial gloss of laboriously spelled-out Girl Power only underlines how strained a male-gaze construct she is.

Nothing about Pixie is credible (least of all when she’s trying to pull off a dud flippancy like “My instincts are telling me we should get our skedaddle on”), yet neither she nor the film are flamboyantly artificial enough for that to work as a deliberate gambit. The dullards, psychos, schemers and bystanders she’s surrounded with are expertly cast, but as written they are one-dimensional without the zest of outsized caricature. Sudden violent reversals of fortune ring hollow; nothing here has resonance on the one hand, or real wit on the other. The climactic slo-mo bullet ballet in a church might as well be a pie fight, the whole enterprise having grown so silly by then.

Right through the closing credits, the Thompsons maintain a tone of cheeky swagger at distinct odds with the stuff this movie is actually strutting. After a while, “Pixie” feels like that man at the party who’s laughing too long, too hard at jokes that aren’t very good — and he’s the guy telling them. The film’s packaging is its greatest strength, even as its polish ultimately highlights the flimsy content.

All the surface elements are in place for a rollicking comedy thriller, except thrills don’t appear to be Thompson Sr.’s strong suit, and humor may not be Thompson Jr.’s either. To dive this deep into borrowed Tarantino territory, you need to have a firm grasp on those two things at least, and in both respects, “Pixie” is a weak handshake convinced it’s making a knockout impression.