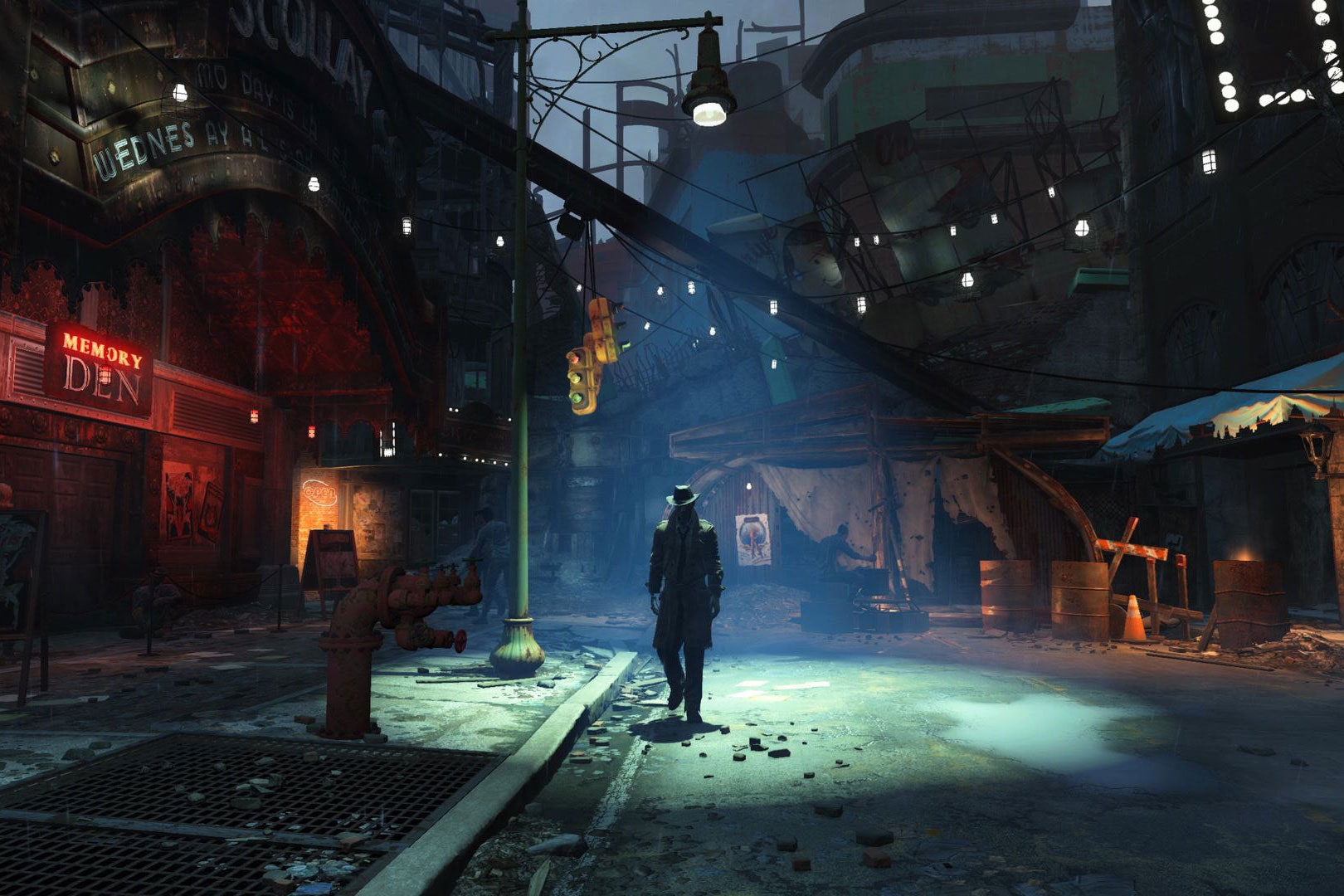 At the beginning of the pandemic, depressed from losing steady freelance work and my social life in the city, I promised my wife: no postapocalyptic video games, no Armageddon hand-wringing. We’d just moved 45 minutes from Manhattan to a 100-year-old fixer-upper, because we both felt that living in a 450-square-foot apartment wasn’t sustainable forever and we wanted more space that we could actually afford.

When we moved I felt out of place, a lifelong city girl trapped in a suburban town, far from walkable distance to friends and my favorite hangouts. When I told people that I was moving to Jersey, they’d say, “Oh my God, I’m so sorry” and pat my shoulder. My wife loved living amongst the deer and woods. She couldn’t understand that not being able to go for a walk and eat questionably safe street meat at 1:00 am felt stifling to me. We were living in an updated version of Green Acres played by two biracial, middle-aged geeks.

Suddenly Covid-19 hit and ravaged New York, and everything changed. The weekly trips I took to the city for meetings, classes, or appointments that provided some feeling of freedom were all gone. Living in the ’burbs already felt claustrophobic to me—now it felt like full-on imprisonment.

I struggled to play open-world RPGs with idyllic views of fictional meadows and forests. After a while, I could barely bring myself to keep going into my gaming room, a converted closet with a single-window to the outdoors. I’d compare the waterfalls and trees in Skyrim against the walls of my tiny office, which seemed smaller and more suffocating as the weeks dragged on.

Eventually, I ended up turning to games about worlds ripped apart by war, violence, and human depravity. Unexpectedly, they made me feel much better. It wasn’t immersing myself in dystopian suffering that helped me to see things from a different perspective, but, rather, imagining how fictional people defeated insurmountable odds in worlds staged after the collapse of civilization that made me hopeful for the future.

Fallout 4: Finding More Than a Friend in a Good, Good Neighbor

I went back and started up Fallout 4, arguably my least favorite game in the series. The protagonist’s default spouse didn’t seem to have a lot of screen time to develop a personality, and I felt little incentive to play all of the quests when the main one involves searching for the main character’s son. After all, what monster would spend 40 hours doing side missions knowing that their child’s been kidnapped?

In my new playthrough, I created Bobby Sue, an I Love Lucy lookalike who beats people up with a giant lead pipe. Giving up hope on her lost son, Bobby Sue decided to live out her dreams of the theater degree she never pursued in the apocalypse, slapping on costume pieces like wigs or a tricorne hat and defending small villages by breaking the kneecaps of Super Mutants. Bobby Sue eventually found a love interest in Magnolia, a lounge singer played by Lynda Carter at a run-down old bar. I made a point to walk into the Third Rail at the end of each job, order a whiskey, then quietly toss a mutated fern flower I’d found onto the stage as Magnolia finished her song. Throughout each of the Fallout games, the background music makes so much of the story and sets the mood. Playing Billie Holiday while looking at the dilapidated skyscrapers and irradiated plains is an ironic look at the past, a commentary of corny, simpler, bygone times. Yet had everything good in this world died if Magnolia’s songs still stirred the heart of the protagonist each time?

Bobby Sue may not ever find her lost son, but for now she’s having too much fun making eyes at the original Wonder Woman and getting drunk while dressed up like Alexander Hamilton. There was something endearing about this dainty slip of a woman with a Donna Reed haircut that had enough strength to lift a sledgehammer above her head and take down four men. In a world bereft of everything she ever knew or loved, she ended up finding one thing: herself.

Wasteland 3: Back to the Future

A dark satire set in Colorado after nuclear war, Wasteland 3 was the game that really started to turn around my negative views of the pandemic. In Wasteland 3’s world, scientists boasted that one day, they might be able to get technology and culture back to its apex: the year 1987. Teenagers on the street teased their crimped, blond hair as part of the latest fashion. At first, I created characters after me and my wife as accurately as possible. While building our stats, I gave us incredibly low physical strength and high intelligence. Choosing our backgrounds, I gave her, ever the pedantic editor, a perk called “Bookworm,” which raised her experience by 10 percent. I chose “Mopey Poet,” gaining a mere 5 percent evasion.

Armed with two of the least helpful perks, we charged out into battle against several insane cannibals cloaked in deerskin. Within seconds, we died. Maybe I made it too realistic. I went back and chose two of the game’s premade protagonists: Dusty and Marie. Dusty, a large and gregarious older woman, wields huge guns and bazookas and loses all composure by laughing uproariously when she drinks too much. Marie, her younger apprentice of sorts, repairs weapons and looks after Dusty when she doesn’t think before she speaks. I thought, well, these two are basically us, except they have better stats. I’ll pick them.

Wasteland 3’s over-the-top humor turned out to be just what I needed. I traversed barren terrain and encountered strange settlements, including gang turf run by an elderly man dressed like Count Dracula. Dusty took the lead, trash-talking raiders into surrendering, firing off her minigun like Rambo, then eventually sleeping with the oldest sex worker at the local brothel for no apparent reason other than imbibing too many beers laced with weed in a bar. Marie rolled her eyes and repaired all of her missile launchers. Finally, I reached a village of religious cultists dressed out of the Handmaid’s Tale, who worshipped a talking giant robot shaped like Ronald Reagan, laser beams flying out of his eyeballs.

Now the end of the world actually seemed funny. Maybe I’d taken this all too seriously.

After four corporate wars, the citizens of Night City seemed to fare better than the survivors of post-nuclear variety. Although crushing economic inequality announced itself from the repetitive billboard ads of the same handful of companies, people seemed to be living glamorous lives compared to those in a place like Goodneighbor. During the first few months of the pandemic, I realized what depressed me the most was not being able to go into Manhattan. Over and over, I received phone calls from my friends urging me not to come in, that the city I loved was gone; it felt like my favorite family member had died.

When I booted up Cyberpunk 2077 and looked around at the city, I realized it was the first time in nearly a year that I felt the rush I felt walking around New York. All around were neon lights, rain-slicked streets, impossibly fancy restaurants, hip clubs, people talking about their lives over cocktails. I wasn’t in Jersey anymore, the only sounds outside my window raccoons eating from the trash can. I looked out of V’s apartment at the city skyline, creating little stories in my head about a fictional person living in each of the windows dotting the skyscrapers, and realized that I’d done exactly the same thing on the first day that I’d moved across the country to come to The Big Apple. Night City became my refuge and anchor at the end of 2020, and a small symbol of hope—maybe one day, New York could rebuild, just like the City of Dreams after the fourth corporate war.

In stark contrast to the citizens of these collapsing worlds, I realized that I needed to be grateful and appreciate the fact that I was lucky enough to have a roof over my head, food, good health and a few games to pass the time. That I wasn’t really alone—my best friend and Player 2 was next to me every step of the way. The pandemic was also an opportunity to find new friends in my neighbors. We ended up chatting to each other from far away on our separate driveways, sometimes for hours during the summer nights because they, too, felt lonely. Little by little, we fixed our broken, old house and it began to feel like home.

Fallout’s famous slogan is “War never changes.” Unfortunately real life drastically does, all the time. Yet just like the citizens in these games, each of us finds new ways to adapt to the challenges, move forward into what lies ahead, and survive.

More From WIRED’s Year in Review