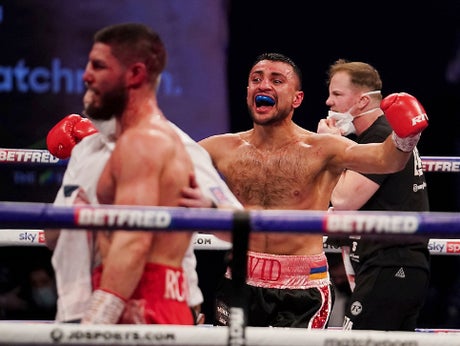 David Avanesyan delivered a brutal six-round beating to Josh Kelly in a bloody defence of his European welterweight title.

In the long-awaited fight between the pair, following several postponements, the Russian proved his class, operating as a sniper inside the ring at a deserted Wembley Arena.

The comprehensive victory should propel Avanesyan towards a deserved world title shot in one of boxing’s most competitive divisions, with his vicious intent, often hidden behind a grin in the build-up, revealed after the first bell.

Kelly, visibly larger than the champion at the weight, delivered a beautifully left hook in the second to stun his opponent and bring the fight to life.

But Avanesyan snapped out of his brief daze before the end of the round, with Kelly given a cruel insight to just how quickly momentum can swing in championship boxing.

Before he could even regroup in his corner, crimson swiftly trickled down Kelly’s neck, with Avanesyan gleefully accepting the challenge to trade leather, perhaps affirming his own “premonition”, after so much conviction from the Briton in recent weeks that this was his time.

Live Rugby union coverage direct to your inbox every week

The Russian was more efficient too and smartly slashed away at the Sunderland fighter’s body, which predictably saw his neat work unravel.

With away fighters enjoying tremendous success in the Covid era in boxing without fans, Avanesyan, a slight underdog entering the fight, seized his opportunity here with a polished performance.

Kelly was left dazed and vulnerable with trainer Adam Booth tossing the towel into the ring, having claimed a week earlier that he would have saved Josh Warrington in his controversial loss to Mauricio Lara.

Admirably, he was true to his word, and as he comforted a dejected Kelly, a delirious Avanesyan jumped from one side of the ring to the other in celebration.

The emphatic conclusion to a breathtaking fight sees him on the verge of a world title, while Kelly must regroup from a damaging loss that will truly test his resolve to reach the top of the sport.