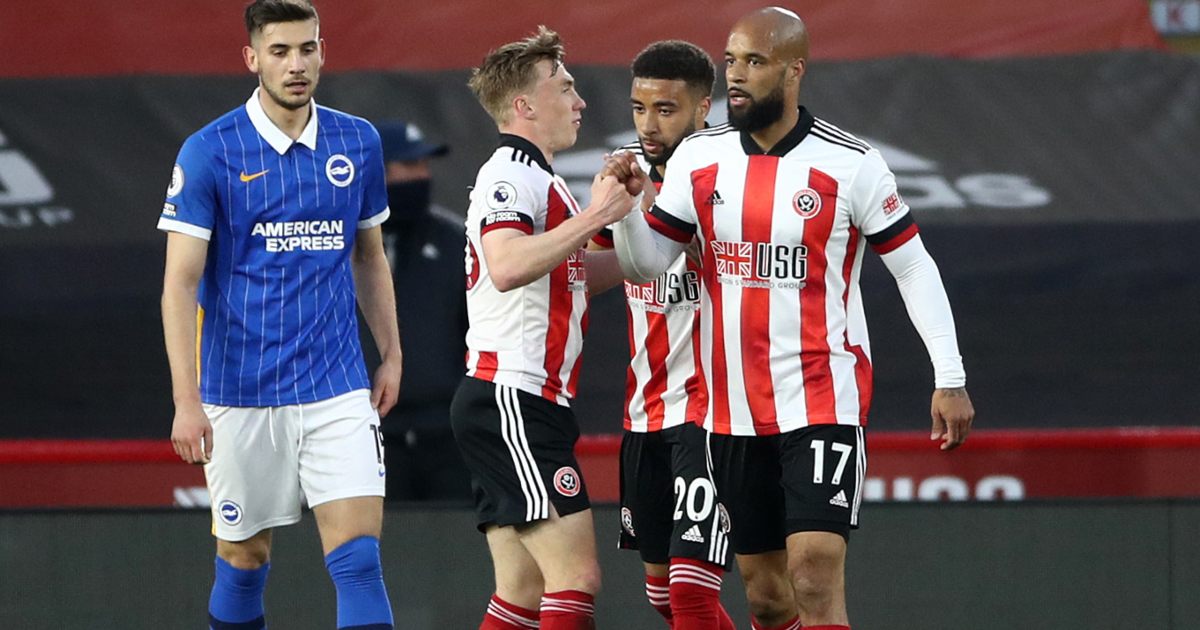 Relegated Sheffield United won only their fifth Premier League game of the season to ensure Brighton continue to sweat over their top-flight future.

The Blades’ fate was sealed with defeat at Wolves a week ago but they responded with a 1-0 victory at Bramall Lane on Saturday night, courtesy of David McGoldrick’s first-half strike.

It was Paul Heckingbottom’s first points as interim manager since replacing Chris Wilder last month and, after calling for an upturn in results in order to take some sort of momentum into next season, he will have been pleased with much of what he saw from his side.

Brighton still have the luxury of a seven-point cushion and should be safe, but a daunting run-in which includes games against Leeds, Wolves, West Ham, Manchester City and Arsenal is enough to keep them looking over their shoulders.

A good start to the match by the Blades was almost undone after 12 minutes when a driving run through the centre of the pitch by Yves Bissouma was unchecked, allowing him to put Neal Maupay through on goal.

The Brighton striker was unmarked on the edge of the penalty area but thankfully for the hosts, Aaron Ramsdale had spotted the danger and raced from his goal to make a fine block from Maupay’s driven shot.

It proved a big save by the England Under-21 international goalkeeper as shortly afterwards McGoldrick opened the scoring.

Some good pressing by Ben Osborn in midfield allowed the Blades to wrest back possession. Enda Stevens then set Osbourn free down the left and his cross into the box was sliced clear by Joel Veltman to the edge of the penalty area, where Pascal Gross’ attempt to clear the danger then ricocheted off Rhian Brewster and into the path of McGoldrick, whose shot on the turn from eight yards out wrong-footed goalkeeper Robert Sanchez and rolled into the net. It was a messy goal from Brighton’s perspective. 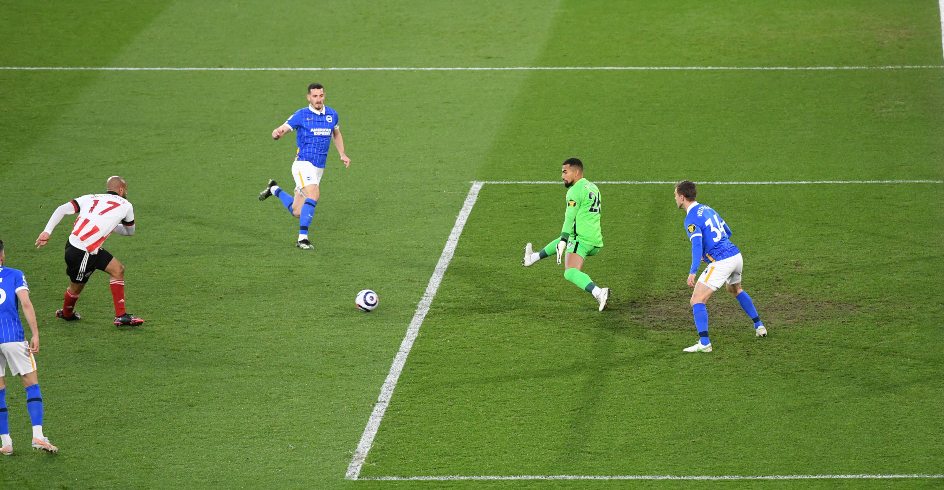 The visitors offered little by way of a response, with blocked efforts from Bissouma and Jakub Moder as half-time approached all they could really muster.

It was immediately noticeable that there was more intent from Brighton after the restart as Lallana worked Ramsdale, but his shot was straight at the goalkeeper.

Lallana and Danny Welbeck then combined to put Maupay through again but once more Ramsdale produced a fine save to deny the striker, getting down quickly to push the ball round the post after Maupay had tried to squeeze the ball into the bottom corner of the net.

1 – Sheffield United picked up their first victory and first clean sheet under Paul Heckingbottom, having lost each of their first five games in all competitions under him, conceding 13 goals in the process. Consolation.

It felt like an equaliser was coming and Brighton thought they had it after 56 minutes when Moder turned the ball home from close range following a corner. However, VAR showed the Poland international was clearly offside.

Lallana was unable to direct a header on target and Bissouma also saw an effort fly wide as the visitors continued to knock at the door.

The Blades were now restricted to trying to play on the counter attack and a rare foray forward saw McGoldrick send a curling shot into the hands of Sanchez.

Brighton should have equalised midway through the second half. Alireza Jahanbakhsh cut the ball back for Maupay inside the six-yard box, but the striker somehow lifted his shot over the crossbar.

At the other end, Jayden Bogle could have settled the nerves of the home side but his tame finish from George Baldock’s cross was poor as Sanchez easily smothered the ball.

It was backs to the wall stuff from the hosts as tried to hold on, which they managed to do courtesy of some wayward finishing from Jahanbakhsh and another fine save from Ramsdale – who did well to push away a swerving, dipping shot from Jose Izquierdo late on.