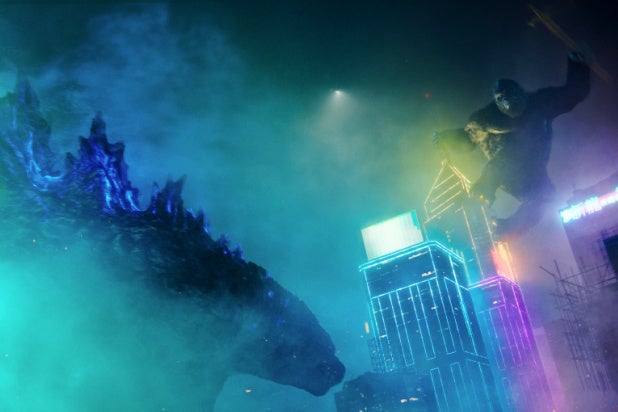 We don’t get a lot of “versus” movies all that often — the last big one was “Batman v Superman” back in 2016 — but these sorts of title showdowns have been a hallmark of the “Godzilla” franchise almost since the beginning. And now the giant lizard has to face off against not one, but two of his greatest foes in “Godzilla vs Kong.”

Godzilla and Kong have two distinct “rounds” in the movie, but then Mechagodzilla enters the fray and the pair are forced to team up to beat the Apex Cybernetics monstrosity. Kong and Godzilla go their separate ways after that, both still fully alive and still stomping around, so you might be tempted to call it a draw. But I don’t think it’s that simple.

Let’s hash it out.

So the first round takes place in the middle of the ocean when Godzilla ambushes the fleet carrying Kong to Antarctica. Godzilla had a clear advantage in this fight, and not just because Kong was chained up as things got started — Kong was also under some amount of sedation. On top of that, the ocean is Godzilla’s turf, and certainly an environment that Kong is not fully comfortable in because he can’t breathe underwater like Godzilla can.

Also Read: The 13 Most Insane Parts of ‘Godzilla Vs Kong’

Kong puts up a surprisingly good fight even so, with some help from the military which served as a helpful distraction for Godzilla. Things generally went well for him when he kept the fight on top of a ship — like when the battle briefly turned into a slugging match on top of an aircraft carrier. But Godzilla kept pulling him back into the depths, and it was eventually too much. Kong was alive, but humbled, as Godzilla swam away.

The movie itself splits the second round — the fight in Hong Kong at the end — in half, but I don’t like that. I’ll explain why later on in this article when we get to that arbitrary division. But for the purposes of this discussion we should start at the beginning.

The second fight between Godzilla and Kong is very different from the first, taking place on neutral ground in a city. And this time, Kong has his magic family axe from the center of the Earth that can absorb Godzilla’s laser breath. And it’s an even fight, with each getting in some serious blows — Kong getting nailed in the back with the laser breath, and Godzilla taking the axe deep in his leg.

Also Read: The Plot of ‘Godzilla vs Kong’ Explained

Kong concludes this portion of the fight when he uses his axe to absorb Godzilla’s blue laser while smacking him in the face with it. The two both go flying backwards, wrecking buildings as they fall on their backs.

At this point, Dr. Lind (Alexander Skarsgard) looks down from his flying vehicle and says: “Looks like round 2 goes to Kong.”

I don’t buy it. Both of them end up on their backs after Kong’s blow, and there’s no indication that any meaningful amount of time passed before they started fighting again. I think this is the movie’s way of not humiliating Kong, who is essentially the main character of the movie.

Because Kong and Godzilla only fight each other for about another minute, and Godzilla spends most of that minute absolutely whooping Kong, carving him up with his claws and stepping on his chest. He once again forces Kong to submit, and once again walks away.

And that’s when Mechagodzilla enters the fray, and Godzilla and Kong have to team up. Godzilla has to carry the fight alone at first, until the injured ape gets a pep talk from his best friend Jia (Kaylee Hottle) and gets into it. And it’s Kong who finishes this fight — Gozilla, pinned, fires his laser breath at Kong’s axe to charge it up, and then Kong uses it to cut off all of Mechagodzilla’s limbs before ripping its head off.

Obviously, Kong’s emphatic demolition of Mechagodzilla is satisfying, yes. But it doesn’t change the fact that in his battle against Godzilla, Kong got crushed.

We can give Kong a pass for not passing muster in the middle of the ocean, but Hong Kong is a different story. This was only a fair fight when the axe was charged up. Once the charge faded, Godzilla ate Kong’s lunch and easily could have finished him off.

Fortunately, Godzilla wants his rivals to submit, not die. And it appears they’ve come to an understanding after their teamup, presumably with Kong moving down to the Hollow Earth while Godzilla continues to roam the seas on the surface.

But don’t get things twisted. The title fight in “Godzilla vs Kong” did not end in a draw. It ended with Godzilla forcing Kong to submit. And that’s all there is to it.