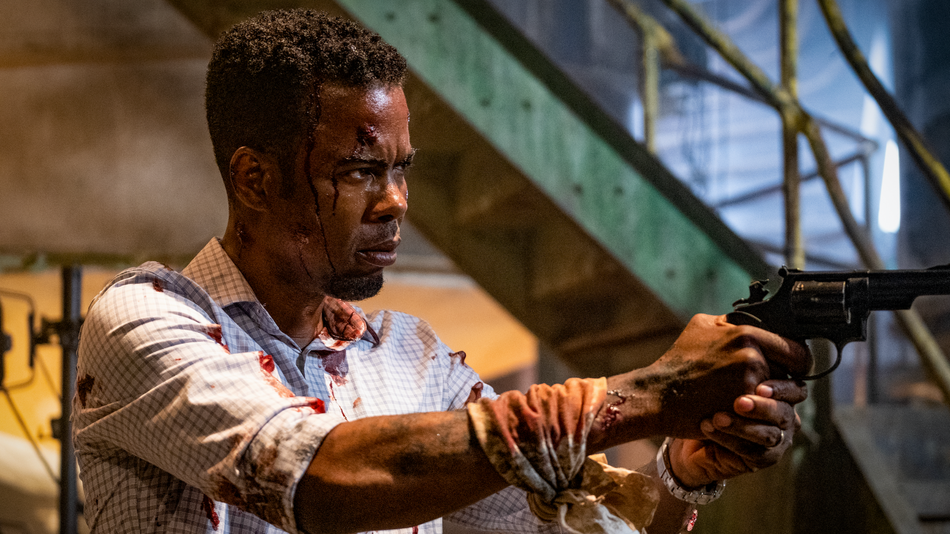 Going into Spiral: From the Book of Saw, I was thinking about the kills. But leaving the theater (yes, an actual theater!), blood and guts were the least of my concerns. There was just too much else to be excited about — too much else to haunt my nightmares and post-screening conversations.

“That’s why his tongue was at the courthouse.”

Based on a story by and starring Chris Rock, Spiral begins with classic Saw fodder: a man strung up by his tongue in a subway tunnel. That man, we learn, is a police detective with a lengthy record of perjury allegations. Will he cut out the tongue that wrongly put innocent people in prison, or is it now him “who will be railroaded?” Yeah, like I said, it’s traditional Saw shit, and this idiot is about to get mowed down by a train.

Enter Detective Zeke Banks (Rock) and the baffling moral conundrum Spiral makes him address. The son of former police chief Marcus Banks, played by Samuel L. Jackson, Zeke was good friends with the now tongueless detective targeted by this evident Jigsaw copycat. But he’s also troubled by the pretense of his buddy’s demise. “That’s why his tongue was at the courthouse,” Zeke says, in one of many procedural-style scenes depicting our hero slowly unraveling this crime and its motives.

When another cop bites the dust, it’s clear Jigsaw Jr. is after police specifically. With the support of Metro PD Captain Angie Garza (Marisol Nichols) and rookie detective William Schenk (Max Minghella), Zeke begins a race against time to find the killer and bring them to justice. The only problem? Well, you know, this time the sadistic murderer is kind of right.

You know, this time the sadistic murderer is kind of right.

Using Rock’s talent for dissecting racism and systemic power imbalances, Zeke spends much of the film discussing what makes some law enforcement officers bad. Instead of punishing people for petty stuff (remember the time that janitor got his ribs crushed for smoking cigarettes in Saw VI?), Spiral‘s killer chooses their prey based on proven histories of corruption. These Jigsaw victims have killed witnesses and suspects without cause, and then covered up for it relentlessly. Yeah, yikes.

It’s a heavy-handed but not quite ham-fisted approach to something as complicated as police reform, considering Zeke continually contextualizes his profession for the audience.

In an early scene, he spouts off a list of statistics highlighting police officers’ likelihood to experience depression, suicide, and domestic violence. Repeated references to the fictitious “Article 8” — a law giving police officers even more legal protections in the Saw universe — expand the dialogue around when, why, and how police officers are wrongly permitted to make life and death decisions. There are no references to Black Lives Matter, ACAB, or #defundthepolice, but had the film been shot after summer 2020, there could have been.

In this way, Spiral is the first true spinoff of the Saw franchise. Ostensibly, sequels allow creators to revisit elements of titles not yet taken to their narrative extremes. For Saw thus far, that’s meant rehashing the idea of “traps” — those grisly feats of engineering that force victims to violently maim themselves in order to survive and learn a lesson (y’know, theoretically.)

Spiral is the first true spinoff of the Saw franchise.

From the original 2004 movie to the 2017 pseudo-reboot Jigsaw, we’ve seen these contraptions get ever grosser and more creative. They weren’t always from the OG Jigsaw killer himself, but his long line of successors took similar pleasure in getting on their high horse, gamifying murder, and shocking audiences. Spiral takes a different tact.

Rather than attempting to outdo past traps or follow the franchise’s labyrinthine plot structure, director Darren Lynn Bousman starts mostly fresh and so does Spiral‘s killer. It’s a choice that had me nervous for the first 30 minutes, but built to the sort of ending only great spinoffs can manage. In accepting the portions of Saw that could not be elevated any further, Bousman was able to dig into the philosophical terror the franchise has always carried. That let me get more invested in the why of these killings, as opposed to the how, and made room for newer, more interesting thematic explorations through this lens that’s unceasingly scary.

To be sure, moviegoers seeking the classic Saw experience will get just that. In Spiral, blood is spilled, fingers are popped off, and skin gets peeled away in sheets. But audiences will get a lot more than gruesome special effects or an excuse to say “Hello, Detective Banks.” (Though, it should be said, the new killer’s catchphrase is a real earworm.)

Spiral marks a turning point in the Jigsaw legacy — a watershed moment when the Saw franchise began playing its game smarter not harder. Keep picking away at the threads of revenge, or perhaps justice, as the new Jigsaw sees it, and these copycats will have ample room to make their mark.

Spiral: From the Book of Saw is now in theaters.

WATCH: What to binge on the best 30-day streaming service free trials