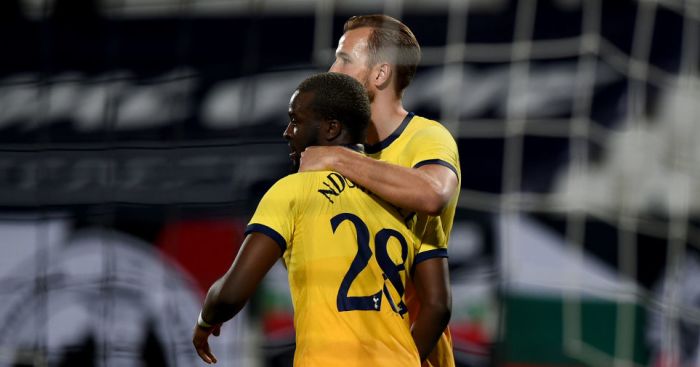 Spurs are through to the next round of Europa qualifying. Just about.

An awful lot of Tottenham’s traumatic and dramatic Europa League qualifier against Lokomotiv Plovdiv was predictable enough that you didn’t really need to actually watch it, which was just as well given the amount of time the pictures from the host broadcaster were unavailable and Premier Sport found themselves having to desperately plug the gap with some Serie A featurettes.

The pitch was predictably heavy. Both Plovdiv and Spurs were exactly what you would expect. Plovdiv were well-drilled, massively up for the occasion, very big, often bald and frequently bearded. Their shirt numbers were all over the place; one of them wore 61, a subtle dig perhaps at just how very long ago Tottenham’s second and final league title was. Spurs meanwhile were leaden, ponderous and rubbish.

Spurs went through in the end, also predictably. Harry Kane scored from the penalty spot because of course he did.

But it wasn’t all quite so easy to map out. Even the most pessimistic of Spurs fans – who would rank among the most pessimistic humans on earth – probably didn’t truly envisage being a goal down to the sixth best side in Bulgaria with just 10 minutes to go. None of us can claim to have expected the resulting turnaround to involve two red cards, someone going full Suarez on the goalline and Tanguy Actual Ndombele scoring the winner.

And we certainly didn’t expect to be watching a very interesting but highly off-topic short feature about SPAL’s return to the Italian top flight while all that was happening because the live satellite feed from Bulgaria had gone down again.

It was the second such massive loss of pictures. Having got away with it in the first half, when the loss of coverage made the last 10 minutes of the half by far the most entertaining part of it to watch – there are three generations of Maldinis now!! Paolo still has amazing eyes!!! – the broadcasters were not so lucky in the second. Ndombele’s winner might have been a touch offside, we can’t be sure from the, er, alternative means we had to deploy to watch what was happening.

Our verdict on Spurs on site soon. For now, a rare glimpse behind the curtain and a look at our exhaustive notes on a classic European night. pic.twitter.com/X38Z1RZeo3

Before all that, a strong Spurs side had in truth started brightly enough in their new bright yellow kit. Heung-Min Son forced an early save. Steven Bergwijn rattled the crossbar from the edge of the box after 10 minutes. Fifteen minutes later he was brought down for an absurdly obvious penalty that was inexplicably not given.

A different outcome to any one of those three moments and Spurs, if not the Premier Sport social media operative, would have probably had a far less stressful evening. But even in between those flickers of life there were all the failings that have become the hallmarks of Mourinho’s Spurs at their worst. The wastefulness in possession. The lack of movement. The resorting to aimless hoofing. The occasional flash of something from Giovani Lo Celso to remind you things could and should be so, so much better than this.

When the second half began with live pictures restored and fireworks going off outside the ground, Spurs pushed again for the goal that would surely come in spite of themselves. Kane linked up well with Ben Davies to tee up Son, who scuffed a bobbling ball over the bar from close range. Kane tested the keeper himself. Just as you thought Spurs were about to actually stamp some authority on proceedings, off went the pictures and in went the Plovdiv opener.

Had they kept their heads, Spurs would now be faced with the none-more-Spursy high farce of announcing a pair of transformative signings from Real Madrid on the back of one of the most humiliating night’s in the history of a club that, even during the recent years of relative success, has endured plenty of those.

That, at the very least, has been avoided. Spurs were in many ways on a hiding to nothing here, but they have still done only the absolute barest minimum. They are through, they picked up no serious injury. They have avoided total humiliation. It’s not really enough, is it?

Tomorrow is surely going to be a far more positive one for Spurs, although they can only hope that Gareth Bale and Sergio Reguilon found it just as hard to see any of that performance as the rest of us. The club is about to get a huge lift from a genuinely excellent double signing.

In time that pair may well have just as much impact on the pitch. Spurs desperately need them to. Otherwise we’ll all be hoping and praying for more technical difficulties to put us out of our misery and let us watch some highlights of Roma v Inter instead.