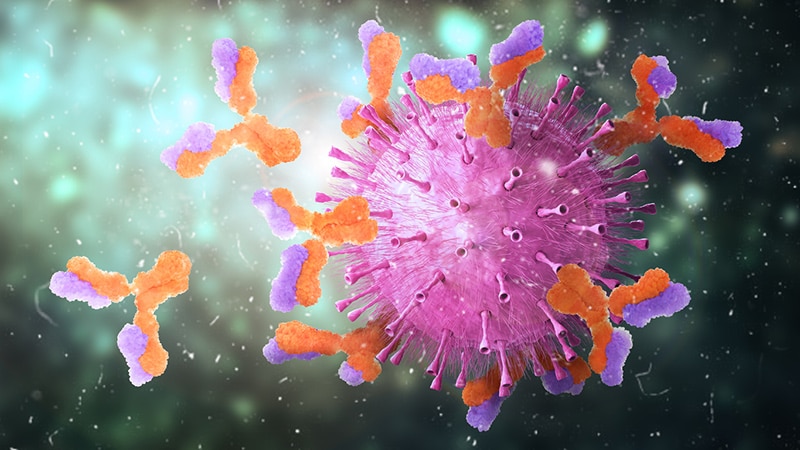 Accurate and accessible viral and antibody testing are essential to helping control the COVID-19 pandemic, and researchers have been looking at T-cells as a key link to learning about exposure and immunity.

Now a new T-cell test — reported to be the first of its kind — appears more effective than a commercially available antibody test in detecting past infections.

Preliminary results of the study found that the T-cell test identified 97% (68/70) of past COVID-19 infections among residents of Vo, Italy as compared with 77% (54/70) who were tested with an antibody test.

In addition, the T-cell response was found to be greater in symptomatic persons as compared with those without symptoms, but there was no correlation between antibody levels and disease severity, according to the researchers. A total of 24 of 70 patients who had initially tested positive for the disease were asymptomatic, and the researchers note that this further highlights the sensitivity of the test in detecting past infection, even in those without symptoms.

Results of this study have been posted as a preprint and have not yet been peer-reviewed.

The test, known as T-Detect Assay, was developed by Seattle-based Adaptive Biotechnologies and is expected to launch after Thanksgiving. It will be the first clinical T-cell test for COVID-19 to enter the marketplace; the company said it will first be provided via a Clinical Laboratory Improvement Amendment (CLIA) and then they will submit the test to the US Food and Drug Administration for an emergency use authorization.

Much of the attention has been on antibodies, although the accuracy of antibody-based COVID-19 tests has been inconsistent. “These data add to the growing body of real-world evidence that the T cell plays a critical role in immunity to SARS-CoV-2,” said Lance Baldo, MD, chief medical officer of Adaptive Biotechnologies. “T cells are emerging as another key indicator for past infection and immunity to the novel coronavirus.”

He explained that the new test came about as an extension of an existing partnership with Microsoft. “It wasn’t initially about coronavirus but to see if we can use T-cells to diagnose different diseases, including the early detection of cancer,” Baldo told Medscape Medical News.

Before the pandemic began, the companies were working on an ambitious project to map out millions of T-cell receptors to thousands of conditions, and to create a map of immune response to disease. “Then COVID hit, and we knew that this was not your seasonal flu situation,” Baldo said. “So we looked at how we were going to take this knowledge and adapt it to the coronavirus efforts.”

In the current study, the company collaborated with researchers from the University of Padua and San Raffaele Hospital in Milan, Italy. Together they sequenced T-cell receptors (TCR) from blood samples from 2290 individuals.

“Once the T-cells are obtained from patients with a certain condition, they can be sequenced and with the use of machine learning, we can create algorithms or classifiers to be able to detect or diagnose a disease,” Baldo said.

Of this group, 70 had a confirmed COVID-19 diagnosis based on a prior positive PCR test, while the remainder were PCR negative at all time points. Of those in the PCR-positive group, 37 individuals reported symptoms but did not require hospitalization, 9 were seriously ill and required hospitalization, and 24 reported no symptoms.

The researchers report that the “depth and breadth” of the T-cell response was associated with disease severity, as patients who had been symptomatic and/or hospitalized demonstrated significantly higher responses than those who were asymptomatic. Conversely, antibody levels during this post-infection period were less informative as they did not correlate with disease severity.

Of note, an additional 45 (2%) persons out of the 2220 who initially tested negative via PCR testing received a positive result with the T-Detect Assay for past COVID-19 infection. About half of these cases had reported symptoms before or after PCR testing, or reported having been exposed to the virus in their household. These findings suggest that the T-cell assay may also identify past infections that had been missed by prior PCR testing.

“After sequencing thousands of people with COVID and a control population, we have created a classifier, which is just a technical term for a diagnostic, for people with recent or past cornonavirus,” said Baldo. “We have almost completed all of the required analytical studies needed for authorization and we plan to have it done after Thanksgiving.”

Baldo pointed out that the test can be launched before filing for EUA or getting approval, but then filing needs to be done within 10-14 days of CLIA.

The initial focus for T-Detect COVID launch will be within the US, and the researchers plan to submit the study for peer-review publication, along with additional data.

Weighing in on the test, Otto Yang, MD, ScD, professor of infectious diseases at the David Geffen School of Medicine at the University of California, Los Angeles, noted that there isn’t a new concept and, in fact, there is a precedent for using T-cell testing to diagnose past infection. “The most common is the FDA-approved test for TB or the QuantiFERON test,” he said. “Skin testing for TB and a skin test for coccidioides are also crude T-cell tests.”

However, Yang told Medscape Medical News that it is not yet known whether T-cell responses last longer than antibody responses after COVID-19 infection. “The number of persons tested is quite small, so it’s hard to make conclusions about how good the test is for sensitivity and specificity,” said Yang.

Also, he said, “there is a blatant factual error made in the claims that antibody levels do not correlate to disease severity…Several publications confirm that more severe infection is correlated to more antibodies.”

If this test gets an emergency use authorization from the FDA , it would be the first product that is able to detect the response of T-cells to COVID-19, commented Ravina Kullar, PharmD, MPH, an infectious diseases specialist and epidemiologist at UCLA.

“Until now, it has been difficult to measure T-cell response to SARS-CoV-2 except in a lab so this novel technology employed by Adaptive is interesting,” she explained. “This is the only company I know of to date that has this technology.”

Kullar noted that it is promising to see various companies trying to understand the details of immune response to COVID-19, including antibody responses and which specific immune cells have the greatest role in determining immunity in individuals with COVID-19.

“If results from this study are able to be replicated, it would be a great improvement to the existing accuracy rate of testing,” she said. “Various studies have shown that T cells may persist for a longer period of time compared to antibodies so this diagnostic test may give us a clearer picture of the duration of immunity to SARS-CoV-2 following the infection or administration of a vaccine.”

“I suggest further studies evaluating this test in a larger sample size of patients,” she added.

Baldo and several other authors have employment and equity ownership with Adaptive Biotechnologies. Yang and Kullar have disclosed no relevant financial relationships.