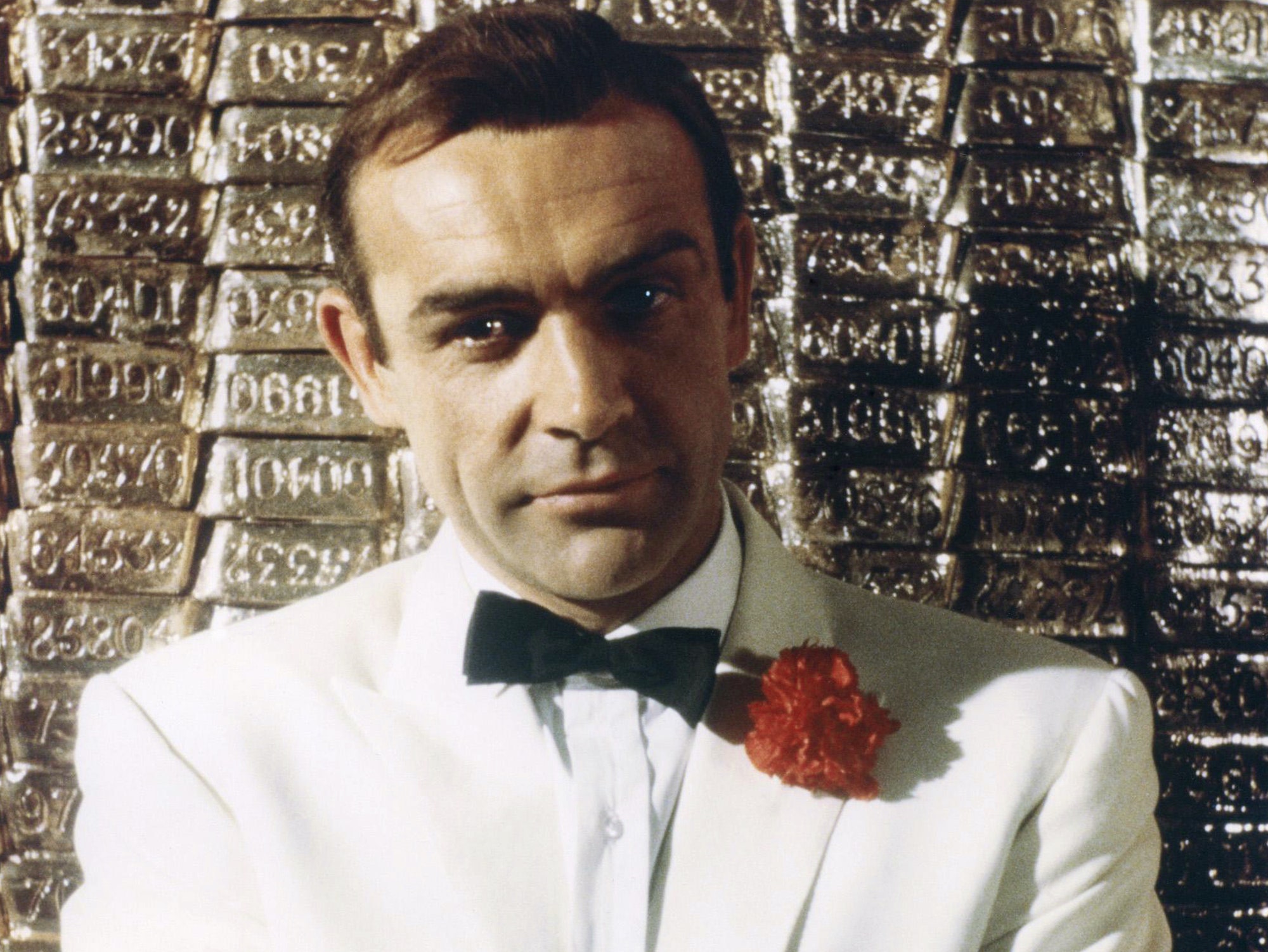 To recommend ten titles from Connery’s curriculum vitae is to regretfully leave a lot by the wayside. (I’m sorry, Terry Gilliam, you are forever getting the short end of the stick.) Some real gold is missing from this list. Still, this represents a look at Connery’s persona from multiple angles, and ought to keep any movie buff busy.

This wasn’t the first 007 film (that was Dr. No) nor was it the original run’s biggest box office hit (that was Thunderball) but this is, in the opinion of the creator of this list, the greatest James Bond picture of them all. It has exotic locales from Istanbul to Belgrade to Venice, a chess master, Lotte Lenye’s poison-tipped shoe, Matt Monro’s theme song, a fight with Robert Shaw on the Orient Express, stashed cameras filming deceptive wooing, and Italian model-actress Daniela Bianchi as a Soviet cryptographer thrust into the Cold War’s theater of excitement to lure James Bond to his doom while wearing a choker. What a picture.

From Russia With Love is streaming for free on PlutoTV with ads, and rentable from most providers for a low sum.

In the words of its director Alfred Hitchcock, Marnie, his follow-up to The Birds, is “a sex mystery.” Connery sought out the role, hoping to keep himself in the public eye in an occasional non-Bond role. (It was released just a few months before the Bond megahit Goldfinger.) Connery’s Mark Rutland marries Tippi Hedrin‘s titular Marnie, a kleptomaniac with additional psychological problems. Whether or not Rutland is a selfless hero who will stop at nothing to alleviate his new bride’s troubles or actually has nefarious ulterior motives keeps viewers guessing in this unusual (and a little icky at times) film.

Marnie is streaming for free on Peacock with ads, and rentable from most providers for a low sum.

Connery made seven Bond films if you count the non-Eon production Never Say Never Again (which you should; it’s terrific.) With them he and 007 achieved a kind of singular cultural hegemony no other film franchise has matched. (The MCU is too scattered, and Harry Potter’s glory is spread out among his cohorts, his school, that talking hat, etc.) It was with this entry, though, that the series, already silly, went full-bore ludicrous. Pussycat-stroking archenemy Ernst Stavro Blofeld’s secret lair inside of a volcano, from which he fires off rockets with kidnapped astronauts, is a fever dream of big, dumb production design, yet the movie is still somehow riveting. Bond’s decision to go undercover as Japanese results in some rather unfortunate makeup, but denying racist tropes in classic film is no way to ensure they do not continue.

You Only Live Twice is streaming for free on PlutoTV with ads, and rentable from most providers for a low sum.

John Boorman was given what’s known in the biz as a blank check after Deliverance, so he took it and gave mankind a gift. Zardoz is one of the weirdest science fiction epics ever made, in which Sean Connery romps around half-nude in a post-apocalyptic wasteland in which violence is stoked (and sex forbidden) among the rabble, but an elite live in a faraway “vortex” filled with, um, mirrored rooms, Charlotte Rampling, and lots of yelling. This was not exactly a box office sensation, and reviews at the time were miserable. Cult audiences later picked up on its greatness and now, decades later, those in the know will tell you it’s one not to miss. “Zardoz has spoken!”

Zardoz is rentable from most providers for a low sum.

This outstanding adventure picture starring Connery and Michael Caine based on a Rudyard Kipling novella from 1888 is one of Hollywood’s last true location-shot Panavision epics. Director John Huston takes a somewhat jaundiced view of Kipling’s colonialist story, while still reveling in its exoticism. Connery and Caine are two mischievous Freemason Brits who end up north of the Khyber Pass and over their heads when the locals anoint Connery as a heralded savior.

The Man Who Would Be King is rentable from most providers for a low sum.

In Hollywood there’s talk about the elevator pitch. Sell an exec your movie with as few words as possible. So how’s this: Outland is High Noon in outer space.

There’s more to say, like how creepy Peter Boyle is as the baddie, and how effective Jerry Goldsmith incorporated synthesizers into the score, or how writer-director-cinematographer Peter Hyams used innovative camera techniques to film “miners on the moons of Jupiter” in cutting edge ways, but we’re already at our floor. It’s High Noon in outer space.

Outland is streaming on Starz and rentable from most providers for a low sum.

Connery was a leading man in every possible sense of the word, but his one Oscar win was for the supporting role of Jim Malone, a police officer ready to join Kevin Costner‘s Elliot Ness in his pursuit of Robert De Niro‘s Al Capone in Brian De Palma‘s electrifying The Untouchables. After the obvious catchphrases “Bond. James Bond” and “shaken, not stirred,” perhaps his most striking line of dialogue caught on film is “that’s the Chicago way.”

The Untouchables is streaming on Starz and rentable from most providers for a low sum.

Indiana Jones and the Last Crusade (1989)

“We named the dog Indiana.”

Who could possibly be cool enough to play Harrison Ford‘s father? In one of the greatest casting coups in history Steven Spielberg and George Lucas got Connery for their third Indiana Jones picture, and then went one step further by making him a bookish history dork. (An irresistible one, but still.) Connery’s Bond was basically the first wisecracking action hero, so it was natural for him to team-up with Indy at some point.

Indiana Jones and the Last Crusade is streaming on Netflix and Sling, and rentable from most providers for a low sum.

Connery as Robin Hood is, indeed, missing from this list, but for a swashbuckling movie why not up the ante a bit and include the one where Sean Connery is the voice of a fire-breathing dragon!?!?!?

Dragonheart is streaming on Starz and rentable from most providers for a low sum.

If one were to ever recommend un film de Michael Bay, The Rock is probably that title. In it, Connery plays a dangerous criminal, the only person ever to have successfully escaped from Alcatraz. Ed Harris has overtaken the island with nerve gas weapons for some reason, and Nicolas Cage needs Connery’s help to save the world. The film will conclude with that shot of him holding green flares, which is military code for “the movie is almost done.” The Rock afforded Connery an opportunity to play an older, gruffer, occasionally vulgar badass, and for this it deserves its fair share of respect.

The Rock is streaming on Hulu and rentable from most providers for a low sum.

— November Cover Star﻿ Gal Gadot Is in a League of Her Own
— A First Look at Diana and Margaret Thatcher in The Crown Season Four
— Celebs Roast Trump in Rhyme for John Lithgow’s Trumpty Dumpty Book
— Brace Yourself for George Clooney’s Apocalyptic Movie The Midnight Sky
— The Best Shows and Movies Streaming This October
— Inside Netflix’s Latest Binge-able Escape, Emily in Paris
— The Crown’s Young Stars on Prince Charles and Princess Di
— From the Archive: How Hollywood Sharks, Mafia Kingpins, and Cinematic Geniuses Shaped The Godfather
— Not a subscriber? Join Vanity Fair to receive full access to VF.com and the complete online archive now.