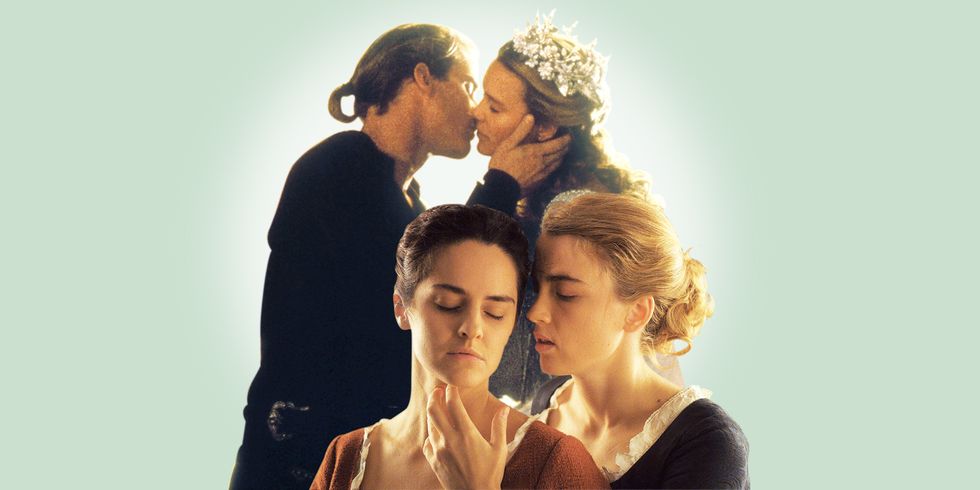 On date night, sometimes it’s best to hit it on the nose: that means romance movies.These days, it’s not hard to set the mood for a romantic night in. Maybe you’re drinking wine. You’re already cozied up together under a blanket. And you turn on the TV. Which streamer app do you go to first to peruse the catalogue? Which one screams romance?

No offense to Netflix, but the “bah-boom” is an immediate mood killer. Amazon Prime delivers your toilet paper every month, so that screen does not signal love. HBO and HBO Max (who knows what the difference is) are both contenders, but there are a lot of very Serious Films on those, too. We’re keeping it lighter tonight. Fresh. Green, if you will. That means with the click of an app, you end up on Hulu, and naturally… Hulu is the most romantic of the streamers. Young, fun, maybe it comes with your Spotify (music is sexy!).

So the rest is up to you. To get you started, we’ve chosen a smattering of options, from the traditional rom com to the moody arthouse indie flick. Here are the best romance movies on Hulu right now, you lothario.

Sports romance films are a niche genre, but they probably could have stopped making them after Love & Basketball, which frankly, can’t be topped. In it, Monica (Sanaa Lathan) and Quincy (Omar Epps) play childhood friends with pro-basketball aspirations. As the two fall for each other, their separate paths to basketball success threaten to drive them apart.

Andy Samberg and Cristin Milioti star in this new rom-com released onto Hulu in the summer of 2020. The two get stuck in a time loop, forced to live the day of a destination wedding over and over again, falling in love in the endless meantime. It’s still charming and fun, despite it mirroring our current Pandemic time loop reality.

You can’t go wrong with a Nora Ephron flick on date night. This Meg Ryan and Tom Hanks pre-dating app relic tells the tale of business rivals who meet anonymously online and begin a passionate Internet romance. When they learn each other’s true identities, they must reconcile their digital love with their real-life hate. Bonus points if you read the title in your AOL voice.

This 2001 film featuring J-Lo as the titular wedding planner is a classic rom-com, which unfolds when she commits the cardinal sin in her field—she falls in love with the groom. You don’t want that on your Yelp review!

This charming love story is both a coming-of-age and coming out film. Starring Nick Robinson, Simon must navigate an online high school crush, his friendships and family, and a blackmailer threatening to out him to the school. But unlike a lot of LGBTQ films, this is far from a tragedy. Might even make you shed a tear.

If Beale Street Could Talk

Based on James Baldwin’s 1974 novel of the same name, If Beale Street Could Talk is a 2018 romantic drama written and directed by Barry Jenkins. Set in 1970s Harlem and starring KiKi Layne and Stephan James, a young couple’s dreams are shattered when Fonny, the man, is falsely accused of a crime. In this film about injustice and love, his pregnant fiance and her family set out to prove his innocence.

This 2004 rom-com starring Adam Sandler and Drew Barrymore tells the story of Henry, a womanizer who is pretty directionless—until he meets Lucy. The only trouble is, her short-term memory loss prevents their relationship from developing beyond day one, and so every day is day one over again. But he won’t give up.

Portrait of a Lady on Fire

This 2019 critically acclaimed film is a historical romantic drama about two young women in 1770 France. In it, a bride-to-be and the artist commissioned to paint her wedding portrait fall in love.

Hello, My Name is Doris

It’s unconventional, sure. But there’s no age where you should stop aspiring for true love. In this 2015 film, Sally Field plays Doris, a woman tethered to her home and a lifestyle of hoarding until some attention from a younger colleague (played by Max Greenfield) makes her realize she’s more unique (and desirable) than she may have ever imagined.