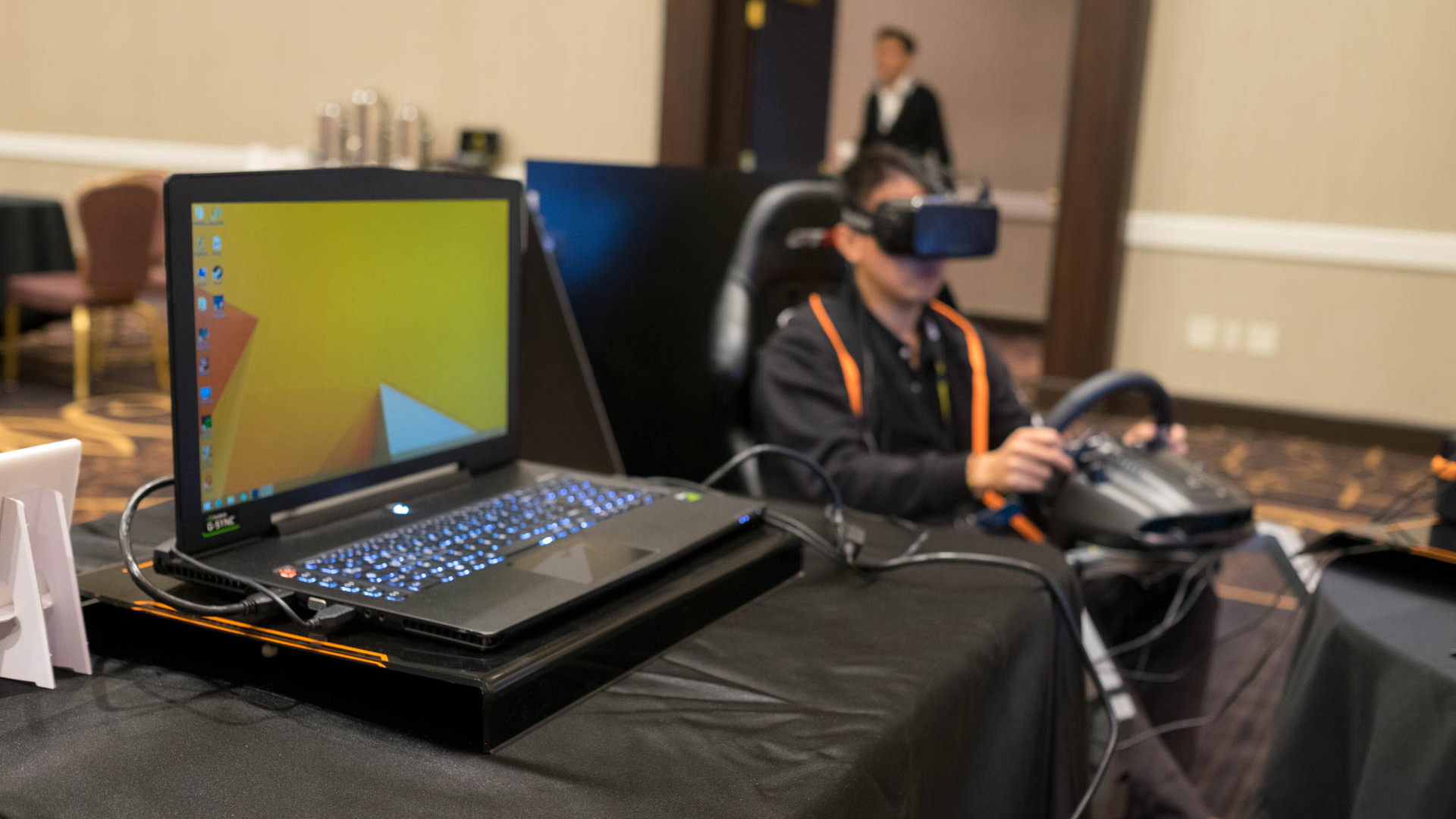 Explore virtual worlds in their highest fidelity with the best VR laptops. While VR is still cutting-edge, more and more best gaming laptops are coming out VR-ready to mingle, rivaling some of the best gaming PCs. Only, they’re keeping things portable, so you can game in VR wherever you are.

That’s without the cost of one of the best VR laptops. Simply put, early adopters will need to pay a hefty toll to cross the bridge into the VR space. The good news is, prices will eventually come down as the technology bends to the will of Moore’s Law, and VR-ready laptops and gadgets will be accessible to more people.

Oculus Rift, HTC Vive and PlayStation VR have been on the shelves for quite some time now, with Valve Index joining them, bringing virtual reality out of the realm of ’90s cyberpunk fantasies and into our homes is easier than ever. And, thanks to the best VR laptops on this list, we can now take it anywhere with us as well.

One of the most impressive Nvidia Max-Q gaming laptops we’ve tested to date, the MSI GS65 Stealth tops our list as it outclasses most of its rivals as far as performance, looking good and classy doing so with its thin and sleek chassis. Of course, it’s VR ready as well, topping our list of the best VR laptops in 2019. It’s not faultless – the audio could be better, as could its heat management – but it more than makes up for those in power and aesthetic.

Slim, light and packed with power

The Asus ROG Zephyrus GX701 is one of the most powerful thin and light gaming laptops right now, boasting a 9th-generation i7 chip, Nvidia RTX 2060 graphics and 16GB RAM in its 0.7-inch thick chassis. That will get you through most powerful VR games, and the only thing that’ll be breaking a sweat is you. Its svelte design will let you squeeze in some gaming discreetly at a cafe, if you turn down the RGB lighting, though you might want to play some non-VR stuff then.

The sharpest Blade yet

The Razer Blade 2019 is sharper than ever, touting powerful innards that will get you through the most demanding games, with the advanced model breezing through your favorite VR games. It comes with a much improved battery life as well, not to mention the Windows Hello camera that was missing in its previous version. All that power and frills come with a high price tag, but with a gaming laptop this intense, you’ll be more than satisfied with your albeit lofty purchase, which is why this is high on our best VR laptops list.

Graphics: up to Nvidia GeForce GTX 1080

–Runs hot under load–Little to no battery life

The MSI GT75 Titan is already an incredible gaming laptop, so much so that we gave it high marks on our review. Yet this gaming desktop replacement also boasts a few VR models, taking gaming to the next level and you through the most demanding and best VR games without much effort. This isn’t something you’d carry with you to work or when traveling, as it is thick and hardly portable. Plus, the price tag is pretty steep. But if you want one of the best VR laptops on your desk, this one’s a win.

The Alienware 17 R5 is designed to delve into virtual reality experiences, though considering how powerful it is – with an 8th-generation Intel Core i7 chip, Nvidia GTX 1070 and up to 32GB of memory, it can handle whatever demanding game you throw at it. Couple those internals with a decent battery life and a stunner of a display, and this is without a doubt one of the best VR laptops money can buy.

The VR-ready Asus ROG G703GI is easily one of the most powerful gaming laptops we’ve ever tested, so it makes sense for it to make our best VR laptops list as well. Playing your favorite processor-hungry, graphics-intensive games on it at the highest settings – VR or not, and you’ll feel like a pro. Just be ready to shell out a bit of cash and have that charger handy at all times, as it is expensive and not very energy-efficient.

This powerhouse won’t have any troubles handling VR

The Origin EON17-SLX has room to breath when it comes to powering a VR headset. Inside the EON17-SLX is a desktop-grade GeForce GTX 1070 chip with 8GB of VRAM and one of Intel’s new Skylake processors, the i5-6700K, running at 4GHz, to start. The laptop made mincemeat of our benchmarking tests, running GTA 5 on Ultra at a respectable 41 fps at 1080p. However, all that power comes with great responsibility, and in this case, you’ll be responsible for not using it more than 2 hours without plugging it in. The virtual reality dream can be experienced away from home, just not for very long.

–As expensive as they come–Painfully short charging cable

Also available with a 4K display, the portable powerhouse that is MSI GT3VR Titan Pro is indeed worthy of its moniker, a place in our best VR laptops list and as a gaming desktop replacement. There are many things to love on here: the gorgeous 120Hz screen, the premium programmable keyboard and the immersive attempts they made on those speakers. Plus, even if you’re not a fan of that gaming look, you’ll find its design quite appealing. All those add up to the perfect candidate for the best VR laptop, if you’re willing to splurge.

The most powerful desktop replacement

The Aorus X9 has a few accolades under its belt. At the time of its release, it was the world’s thinnest Nvidia GeForce GTX 1070 laptop and the world’s thinnest chassis with true laptop mechanical switches, not to mention the world’s first 17.3” laptop boasting quad fans. Accolades aside, it also offers uncompromising power in an ultra-thin body, allowing you to play any hardcore gaming without blinking. This is definitely one of the best VR laptops on the market today.