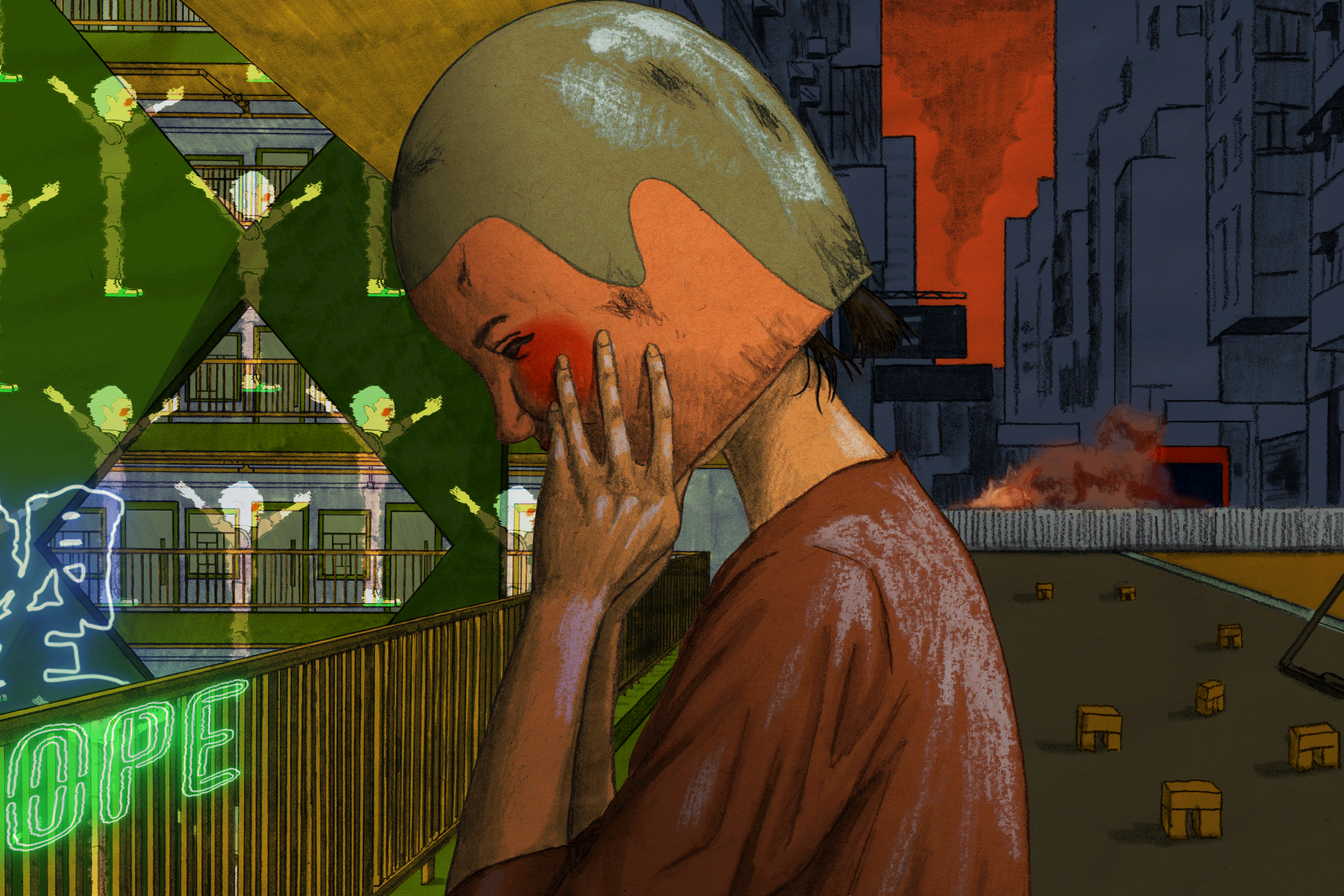 The year is 2029, and you wake up one morning living in a community called Hope, a dystopian dictatorship. “Everyone here wears the same outfit, lives the same repetitive routine, and is happy … For many, Hope is their entire universe. They are uninterested in the outside world. However, you are different—you have the ability to choose.” This is how you are introduced to the game Name of the Will on Kickstarter.

A 2D indie game by Zeitgeist Studio, Name of the Will is being developed by a team of diasporic Hong Kongers based out of New York. They are at once video game developers and impassioned supporters of the pro-democracy protests that engulfed their home city in 2019. As mysterious events begin to unfold, the player must navigate Hope by completing missions and puzzles to “collect intelligence” in a community where anyone could be a snitch and one wrong decision could trigger deep-running consequences. Your aim is to eventually figure out the truth about Hope and how you got there.

The developers started working on the game in late 2019 and expect to publish the full game later this year. Their aim is to help keep their home city’s spirit of freedom, dissent, and democracy alive in a permanent way—even now, as it has come under siege with the imposition of a new national security law (NSL). The pro-democracy protests may have been crushed, but the city’s spirit lives on—if not in the streets then on gaming platforms.

The law, which was imposed unilaterally by mainland China’s central government in July 2020, criminalizes most forms of dissent. This means that simply playing Name of the Will could be against the law. Though the NSL only has jurisdiction in Hong Kong, it can technically be applied to anyone, anywhere—meaning that the Zeitgeist team could be in the line of fire too.

The protests were initially triggered when the government introduced a bill that would allow criminals in Hong Kong to be extradited to mainland China for prosecution, where the justice system is much less transparent. The protests quickly evolved into a fight against encroaching influence from the central government on Hong Kong in general—and in support of a more democratic and free system. At their peak, it is estimated that 2 million people took to the streets to protest against the government.

Since the imposition of the NSL, all prominent activists from the pro-democracy movement have been either arrested or forced into exile. The first non-famous protesters have already been sentenced to several years in prison for rioting, though not yet under the NSL. In total, more than 10,000 protesters have been arrested—of which more than 2,000 currently face charges.

If Name of the Will’s story sounds Orwellian, that’s because it is. Inspired by George Orwell’s classic novels like Animal Farm and 1984, the developers hope to emphasize the urgency of movements like that in Hong Kong. Specifically, the developers thought that Animal Farm’s use of animals as metaphors to recount the story of the Russian Revolution was clever and made the complex history easier to comprehend. In 1984, the dystopian society is under mass surveillance and information control, ensuring conformity by the population. This draws some parallels to where Hong Kong seems to be headed.

By creating a dystopian universe that is supposed to resemble life under a dictatorship in the near future—not just in China, but anywhere—the game serves as a warning to the world: Here’s what happens when people don’t stand up to authoritarian regimes. But it is also a way of preserving the memory of the protests in Hong Kong. There is concern that the government is trying to spin the narrative, in a direction the developers believe doesn’t do justice to the events that unfolded.

“The Internet has this power nowadays to keep the truth alive, and also to spin the opinion of people,” says Jerry, one of the four developers working on Name of the Will, who preferred not to make his full name public due to safety concerns. “We hope to remind people that what you are told from the government might not be true. That you should stand on your own.”

Zeitgeist created Name of the Will first and foremost, he says, for the player’s enjoyment. But also to let the “international community experience the Hong Kong spirit of our generation.” Through online promotion, Zeitgeist raised $25,000 in funding for its game on Kickstarter—mostly from Hong Kongers. That’s almost double what the team hoped for, and a good example of the supportive spirit they want the world to get a taste of.

Set in a gloomy, dark, and kind of creepy world—which is like a futuristic version of Hong Kong—police officers are presented as dogs, those who remain apolitical are pigs (that’s almost everyone), and protesters resemble cockroaches—all slurs commonly used in Hong Kong, and directly inspired by Animal Farm, the dev team says.

“If our game can influence at least one person to keep up their guts to fight, then we might be able to change the world a little bit,” says Mandy, another member of Zeitgeist.

“We’re trying to paint a general scenario of how dictatorships shape society. You’ll see the setting of Hope, the life under surveillance, it’s all happening in mainland China,” Mandy continues, referring to the government’s use of facial recognition tech, digital surveillance, and even point-based personality ratings. “But it doesn’t only happen in China. There are so many countries that are experiencing similar things. We’re just trying to give an experience of what it’s like to live under a dictatorship, and specifically what life is like in Hong Kong.”

Through moral dilemmas and tough decisions that influence the progression and ending of the game, the developers hope to not just give you an exciting gaming experience, but also make you think about the way you live your life.

Mighcty, who wishes to remain anonymous due to concerns over being harassed, shares that sentiment. He’s an independent developer who recently managed to raise nearly $15,000 in a month from supporters of the democracy movement, all to fund the development of his game, Legacy of Datura. The game is a fictionalized 2D fantasy story inspired by the Hong Kong protests, in which Mighcty hopes to preserve the memory of key events from the past few years. With release expected in 2022, he also hopes to spread the story of Hong Kong’s pro-democracy movement to an audience that it may not otherwise have reached. In Legacy of Datura, the player will travel between parallel universes, all different versions of Hong Kong, fighting cops and throwing magic fireballs at the bad guys.

But it wasn’t initially structured this way. In early 2019, “when I first started planning the game, it wasn’t about the protests,” Mighcty tells WIRED. “Because they hadn’t happened yet.”

The game takes place in a fantasy-fied version of 2019’s mass protests, and, in the demo that is currently available to the public, the player is dumped right into one of the movement’s defining moments: the Yuen Long Attack, or the 721 incident. This may not mean much to you, but to pro-democracy Hong Kongers it means everything.

The 721 incident was a point of no return in the protests that severely escalated tensions with police. As night approached, following a day of rallying, a mob of over 100 white-clad men armed with metal rods and wooden canes stormed a metro station where many protesters were heading home, beating them bloody while blocking them inside a train with no way to escape.

Forty-five people were hospitalized following the attack, including a pregnant woman. It remains unknown who organized the attack, but many have speculated that the group was connected to the city’s triads—the Chinese equivalent of the Mafia. Because the police took almost three-quarters of an hour to arrive, despite a dispatch station being located just a mile away, many accused them of deliberately responding at a snail’s pace.

To Mighcty, the challenge lay not in warning about the future, but in preserving the past, such as the memory of 721. “There are concerns that the government is trying to make us forget about the protests,” he says, adding that, with Legacy of Datura, he simply wants to ensure that the news from Hong Kong gets out. If perhaps he can inspire some people to stand up for what is right along the way, that would be a bonus.

“There are quite a lot of things happening in the world, and people quite easily forget some important things. Like, why we do certain things. You know, why did the protests start in the beginning? And that’s something that people should remember, and should not easily be forgotten,” he says.

The 721 incident is just one among many events that Legacy of Datura sheds light on, says Mighcty. But this one in particular has a special meaning, because it was around that time that he decided to start incorporating the protests into the game.

“A lot of people don’t care about Hong Kong—and I’m not blaming them,” he says. In Legacy of Datura, “you can learn what’s happening in Hong Kong through a relatively more relaxing way than the news.”

Very important to Mighcty was that the game paid respect to the victims of these incidents, he tells WIRED. It should bring comfort to the people, not trauma. This was a key influence when Mighcty made decisions on which events to include and how to portray them.

Under the NSL, games like Legacy of Datura and Name of the Will could potentially be illegal to play—let alone develop. Essentially, the law’s obscurity is intended to scare off any dissenters, and that leaves people like Mighcty and the Zeitgeist developers in a gray zone. The former is now trying to design and write the game in a way that doesn’t violate the NSL, but cannot say for sure where that line is drawn.

“I’m actually scared, but I shouldn’t be. None of the things that I do are illegal, I’m just trying to share the news,” Mighcty says. “And I’m not really going to prepare to be arrested because of a game. Because if I do anything illegal, the game won’t release at all.” As someone who still lives in Hong Kong, he’s more likely to be caught in the government’s crosshairs than the developers from Zeitgeist studio.

In the comfort of New York, thousands of miles away from their home city, Mandy and Jerry feel differently than Mighcty. Being out of arm’s reach from the NSL, they are aware that producing the game could mean they’ll have to remain in the United States for good, but they are willing to take that risk out of a sense of duty to the protesters on the ground, who had truly put themselves in harm’s way. This became especially pressing in mid-March, when the government signaled it was on “full alert” against artworks that “endanger national security.”

“There’s a well-known saying that what we should fear is fear itself. If we always think that, oh, what we’re doing might be a risk, I think we’re starting to censor ourselves,” says Jerry.

Relative to their friends and family who were on the front lines over the summer of ’19, they feel the risk they are taking is minimal. For that reason, it wasn’t even a choice of whether it was a risk they were willing to take.

“If I have something I really believe in, I really like to think that I will do whatever I need to, whatever that means. Not doing so would be a violation of my identity and my beliefs,” says Mandy. “I’m an artist, I’m making artwork, and I think I have a responsibility.”