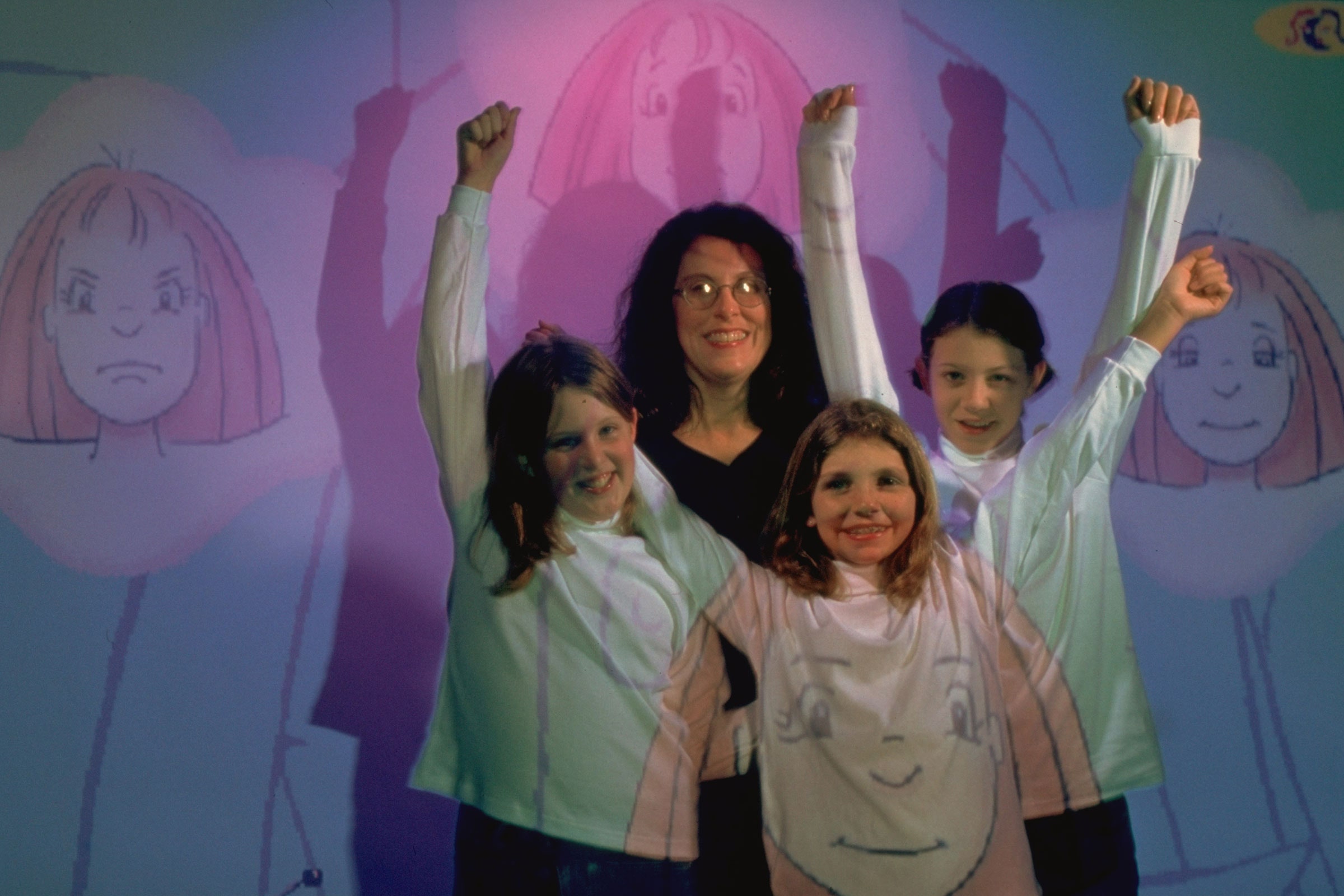 Love her or hate her, you can’t deny that Barbie has always been a game changer, and not just because she was the first doll with a waistline. In the mid-1990s, she changed games literally—computer games, that is.

Women played a pivotal role in the development of arcade and early console-based video games. In the PC gaming industry, on the other hand, they were outnumbered and outranked by men, who almost always balked at the prospect of games for girls. As time passed, though, more and more research confirmed that girls were playing computer games, such as Myst and The Oregon Trail; they simply lacked games expressly created for them. Translation: There was an untapped market.

And so, in October 1996, Mattel Media released Barbie Fashion Designer on CD-ROM. Its basic concept was pretty straightforward: Players could design Barbie clothes and then print out the clothes on special paper for their dolls to wear. Barbie wasn’t the first PC game marketed to girls. It was, however, the first so-called “girl game” successful enough—reportedly outselling some of the year’s most popular games within two months—to convince competing companies they should develop games for girls as well. Sidewalk Studios released The Baby-Sitters Club Friendship Kit in 1996. The Learning Company released The American Girls Premiere in 1997. And Her Interactive developed a series of mystery-adventure games based on the Nancy Drew books, the first released in 1998.

Many girl games took their cues from Barbie more overtly, centering on stereotypically girly themes. Their likewise determinedly femme packaging earned them the tongue-in-cheek epithet “pink software” and a reception nowhere near as rosy. Because these games played up to traditional notions of what girls should care about, they appeared to reinforce girls’ existing beliefs regarding appropriate behaviors and sensibilities for their gender.

Ever since the idea of designing games for girls first started gaining traction, the prevailing wisdom had been that most girls were averse to games like Doom and Quake. Thus, it seemed that girl games would need to be fundamentally different from the first-person shooters that had dominated the shelves for so long. But in terms of the type of content their hypothetical consumers did prefer, women (and a few enlightened men) hoping to carve out a niche for girls in PC gaming had very different thoughts from the old boys’ club. Whereas the latter continued to operate under the assumption that girls gravitated toward makeup and gossip, the former determined that girls craved computer games with two elements: relatability and resolution.

“What girls want … are multimedia games with a good story and believable characters that let them manipulate the level of play, compete in a friendly but challenging environment and resolve situational problems,” Her Interactive’s product development director Sheri Grayner Ray told the Los Angeles Times in 1997.

Of course, neither adult men, nor even adult women, know everything there is to know about preteen girls. Enter Brenda Laurel, founder of the late, great software startup Purple Moon. Laurel and her partners conducted extensive ethnographic research, observing and speaking to girls ages 8 to 14, so they could produce games that would appeal to their target demographic.

In a 1998 TED Talk, Laurel summarized Purple Moon’s MO: “We’re incorporating what we’ve learned about girls—their desires to experience greater emotional flexibility, and to play around with the social complexity of their lives.”

My favorite Purple Moon games revolved around eighth grader Rockett Movado. Each title centered on a significant day (or days) in her life. At crucial points in the story, the narrative would cut to Rockett under three thought bubbles. When you hovered over one, Rockett’s facial expression would change, and her disembodied voice would describe a potential response to the situation at hand. Like a digital Choose Your Own Adventure, how the story unfolded would depend on what choices you made for her. Rockett could be optimistic, suspicious, fearful, confident—any of the ways a girl might feel in her everyday life.

No discussion of Purple Moon would be complete without a nod to its website. For me, it was an equalizer. At school, I was often excluded, but on Purple-Moon.com, making a new friend was as simple as finding one of its 240,000 registered members with whom you had a shared interest: “Your favorite Pokémon is Gyarados? Mine too! You’re a Neopets guild leader? Same here! Let’s be virtual pen pals.” Purple Moon’s website, in my opinion, was also a forerunner of modern social networking platforms. Members could trade treasures (cute, colorful GIFs representing various facets of a girl’s personality), send each other postcards (primitive DMs), and read and contribute to an online edition of Rockett’s school newspaper that featured articles with new details about the characters between games.

Purple Moon wasn’t exempt from criticism, though. Laurel strove to design games rooted in data from real girls. However, children develop a sense of gender constancy by age 7. In other words, by the time she and her team studied them, Laurel’s subjects had probably already internalized old-fashioned conventions about the proper things for girls to like. That raised the concern Purple Moon, too, was perpetuating extant gender roles, albeit inadvertently.

Then again, how are you supposed to design games girls would be inclined to play if they don’t even realize they’d enjoy playing them? Should you create products you think they’d buy, or that reflect the feminist values you want girls to espouse? And what effect would such games have?

The jury’s still out. Before it was possible to draw any conclusions vis-à-vis their short-term implications, let alone their long-term impact, girl games came and went. A few individual franchises, including Nancy Drew, rose from the ashes. Nevertheless, by the early aughts, the girl games genre was no more.

But I’m taking it upon myself to settle this debate at last: The effect of girl games was positive.

Until recently, I didn’t know that girl games were controversial. I was well aware of sexism when I got into computer games; it just never dawned on me that computer games might be sexist. I only knew that my dad sometimes came home from Costco with a CD-ROM that provided me with endless escapist fun. And yet, while I may not have considered them harmful, I didn’t comprehend their value, either. Fortunately, my women’s and gender studies master’s degree program helped me recognize girl games as the founts of female empowerment they were.

At their core, girl games were all about the right to choose your own adventure, your own path, your own destiny. I found detective work fascinating as a kid, but opportunities for me to solve mysteries were, well, somewhat limited. However, Detective Barbie: The Mystery of the Carnival Caper (1998) enabled me to live out my girl-gumshoe dreams. Society teaches the youngest of my gender to be passive participants in their lives—that external forces do things to them and decide things for them. On a computer, by contrast, it’s the girl in the desk-chair driver’s seat. Girl games afforded millennial girls a degree of autonomy we couldn’t attain elsewhere. That’s my kind of girl power.

As Laurel explained in her TED Talk on Purple Moon, “What we’re giving girls … is a sense of the choices that are available.”

Once upon a time, cyberfeminists and progressive parents hoped because they offered newfound access and attraction to computers, girl games would increase players’ aptitude for STEM subjects and interest in related careers. My knack for math and science has always been approximately zero. That said, I did become a journalist, and I have girl games to thank for it; they taught me to feel comfortable with technology. And although I may not be among them, plenty of former players pursued tech professions. Moreover, those with jobs in the gaming industry want to do their part to improve it.

So bring on Girl Games 2.0: Create a simulation game that gives girls a chance to play Kamala Harris as she performs her vice presidential duties or a new version of Barbie Fashion Designer in which players design adaptive clothing for Barbie Dolls with disabilities. Games for Change maintains a catalog of games with an activist bent, which is fantastic. Still, a mere handful have female main characters, and fewer mention girls in their descriptions. To guarantee they’ll be of real benefit to girls, take a page out of the ’90s PC gaming playbook and develop games for girls—except this time, invite girls to brainstorm the games. Maybe even allow girls to code them.

There is no singular girl experience; being a girl doesn’t have one meaning and one meaning only. But all self-identified girls have the identity “girl” in common. And all girls deserve rich, engaging games that show them they can thrive and make a difference in this world—games that inspire as well as entertain. Let’s see to it that they get them.