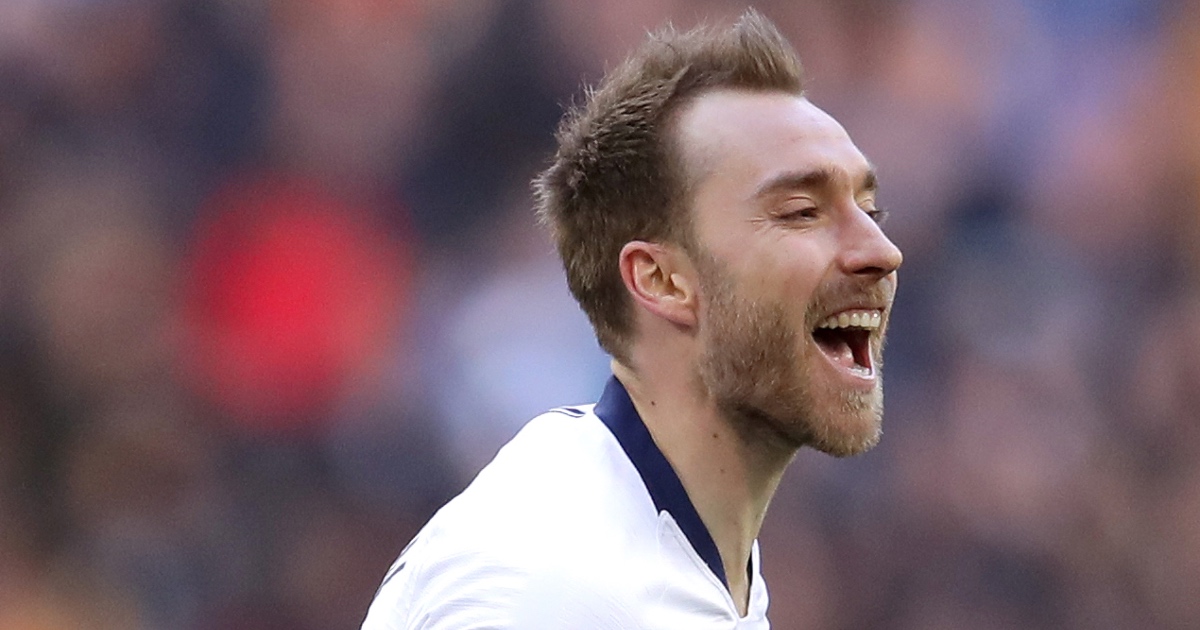 Keep your Eriksen love and anything coming to theeditor@football365.com.

I know people will argue the game shouldn’t have gone ahead but who cares. All that matters is that we didn’t see a person die in front of our eyes. I mean it looked like he was gone but thankfully to all the people who did their part on the pitch and from there on out Christian Eriksen still lives. I don’t think I’ve ever been so relieved. Sitting there in utter shock and sadness just saying no, no, no this can’t be happening! Seeing those dead eyes wide open I thought he was gone. Never have I been as happy to be wrong. He might never play again and that’s a true shame but he’s alive. That’s all that matters for his family and kids and friends. I’m still in shock from what I saw. Shocking.

What we all witnessed on Saturday between Denmark and Finland I’m sure affected us in the very same way, it was shock, worry and dread as Christian Eriksen went down to the floor, watching a human-being clearly in a life threatening situation, seeing not just CPR being performed but also the use of a defibrillator was truly distressing, how his teammates, family and friends felt I can’t even begin to imagine, naturally when you see such scenes you worry for the worse case scenario, thankfully with the news that came out over the hours since it seems he is stable, conscious and recovering from the incident.

After witnessing the incredible quick reactions from Simon Kjaer and of course the outstanding response from the medical team, it made me sign up for my own workplace’s First Aid Training, you never know when it may be you who is the difference between someone living or dying.

Get well soon my brother, a horrifying situation seen all too often on the football pitch. We all hope you recover to be able to glide around the field again, and if not there is always a home for you at White Hart Lane.

For anyone who questions whether these players play with their heart on their sleeves, tonight is a frightening reminder that they do.

Just curious to know if pro refs are trained in CPR as part of their qualification process? Could be life-saving in that first few seconds before the medical team can get to a player in trouble.

Nobody deserves that intrusion…

Denmark-Finland just called off, and pictures just emerging or Eriksen seemingly conscious while leaving the pitch just emerging – hoping more than anything that he’ll be okay.

That was one of the most horrible things I have ever witnessed on TV – I was watching in 2003 when Foé went down, but at least the cameras quickly stopped zooming in once it became apparent what was happening. Surely there needs to be some sort of agreement that the team in charge of footage should not broadcast images like that? Don’t know about everyone else, but every time it zoomed back in and showed CPR ongoing, I winced. When it showed his girlfriend being consoled on the pitch, I winced. Could you imagine being one of his family or friends inevitably sitting at home and watching live on TV? Nobody deserves that level of intrusion. Hopefully this has a happy ending but that should never happen again.

The BBC should be fucking ashamed.

Showing his eyes, CPR and defibbing him, all whilst cutting to upset people in the crowd.

They cut away when streakers show up on the pitch but not that?!

Jon (he’s still one of our own, COYS), Lincoln

Sean asks whether Fonseca is more interesting than some fans and media outlets are suggesting.  I can’t find any other answer than to say, no, this is exactly as “meh” as Football365 describe.

The risks with Fonseca are significant.  He’s not a big name that will help attract big players or keep existing ones.  He’s not got Premier League experience.  He’s failed at his most recent club (notwithstanding it wasn’t easy circumstances – but it has to be considered failure).  His only major success is in a league he would be expected to win.

It’s been well documented already that Roma may well be the Tottenham of Italy.  So arguably we’ve seen what Fonseca can do with a team with some talent and potential but a tricky boardroom and much bigger rivals.  He can finish 7th.  Surely the goal of Tottenham’s appointment must be progressing from where they finished this season.

And that’s why Fonseca is so underwhelming.  He doesn’t allow Spurs fans or players to dream that they might get back to the big time.  It just smells of doing ok.

The other candidates aren’t perfect but they allow fans to dream.  Ten Hag may have only won in a league he’s expected to but he’s also never failed.  Added to that, he has some incredible scalps in the Champions League that point towards some ability.  What if he is a coach who won’t fail anywhere he goes because he really is good?

No-one can doubt that Rodgers has over-performed at Leicester despite their late collapses.  And he’s taken Liverpool very deep in a title race when they still had Jon Flanagan in defence.  What if he could over-perform with Tottenham?

Potter is widely regarded as tactically very good and has also over-performed in pretty much all his roles.  As Football365 have pointed out, his xG and other stats are good if you like that kind of thing.  What if he is tactically brilliant but just needs some better players to put the ball in the goal?

I was wholly against Mourinho’s appointment but even I thought “what if he actually instils a winning mentality in Tottenham”.  Didn’t work out of course but it let us dream a little.

It doesn’t mean any of those people will work – Mourinho certainly didn’t.  It also doesn’t necessarily mean Fonseca will fail.  But the reason Fonseca is so “meh” is because his record doesn’t give us any confidence that we can start dreaming about it being a massive success.  And god knows Tottenham fans need a little hope back in our lives.

p.s. couldn’t agree more about it not being Martinez though – surely even Levy isn’t that blinkered…

Good performance from Italy, with the main factor being their intensity which in turn comes from their fitness.

Coincidence that they allowed 5 subs in their league where most of their players play? I dont think so.

Will be interesting to see the intensity of the England players over the course of the tournament, having shot themselves in the foot by sticking with 3 subs in such a compressed season and knackering all their players out.

Great thinking ahead as usual from England!

I’ve been watching and listening (mainly podcasts) the build up to the Euros 2020, and have been thinking about what constitutes success for the England team. Something which hasn’t come up, which I think would be a significant success, would be to beat a really big team. Beating France, Italy, or a similar teamin this Euros would be a success imo. When was the last time we did this?

Charles (Italy looked amazing last night, but have they peaked too early?)

Man Utd are a big club…

To TX Bill, saying the USA isn’t a racist country is like saying Man United aren’t a big club anymore – essentially, complete and utter tosh! While, of course, United might seem like a “smaller” club, compared to say, City, in their recent trophy hunting exploits. However, we all know that they are, and remain for the foreseeable future, the biggest club in England, and arguably, the world. Why? Because of their history, mainly. They have built and earned that reputation as a big club, and a few dry spells does not remove that hard earned work.

Similarly, the US has earned its reputation as a racist country, and just because you yourself aren’t racist, doesn’t undo all of that. For instance, when slavery is enshrined in the founding constitution. When national holidays celebrate the genocide of the native people. When part of the country starts a Civil War over the right to keep slaves (among other causes too, admittedly), and today that same sepratist flag is still flown proudly, and defended resolutely. When your current and most recent presidents were all young men when the legal segregation of races was protected by law. How do all of those facts fit in with the narrative?

So, yeah, next time you think United aren’t a big club, remember; they are!

Apropos to nothing, can I suggest that if people (in the UK – not sure about other countries) have a spare £2 per month and a bit of free time (difficult during the Euros, I know), they subscribe to DAZN.

DAZN is a streaming service for boxing but for some reason it is showing a fly on the wall documentary, Ronaldo El Presidente, where the original Ronaldo has basically bought and become president of Spanish club Valladolid. Ronaldo comes across as a really nice guy who still likes a good time. Yes, you could well imagine having a pint (or some other alcoholic beverage) with him.

There’s no real reason for me to send this email – I just love Ronaldo. His injuries at Inter still break my heart. Cheers

Rob da Shrimper (oh, and you get quite a bit of insight about the running of a professional football club too)