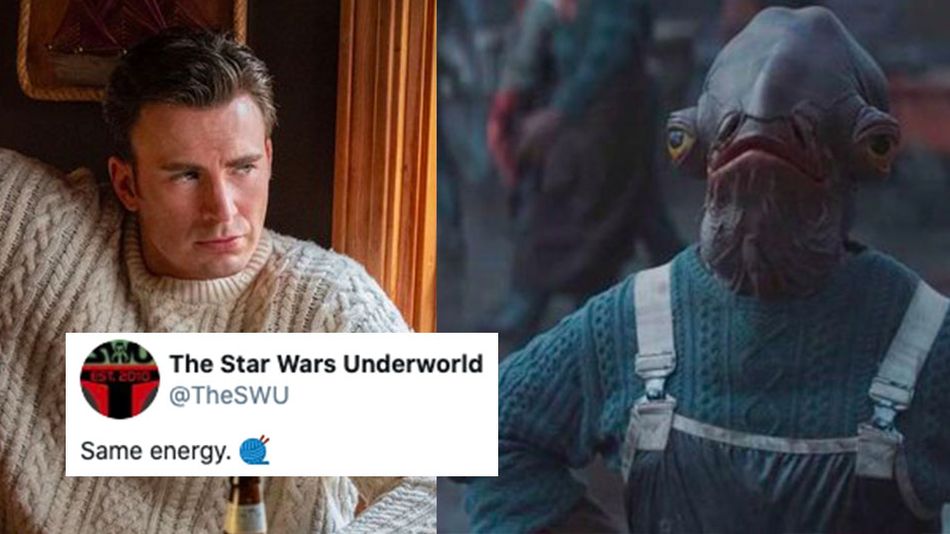 Beloved internet stars Baby Yoda and Chris Evans now have some serious competition: A Mon Calamari in a sweater.

The first installment of The Mandalorian Season 2 premiered Oct. 30 on Disney+, but since new episodes are being released every Friday each weekend brings some delightful new Mandalorian Twitter discourse.

While I assume many people are tuning in to see their beloved Baby Yoda again, after “Chapter 11: The Heiress” dropped on Nov. 13, a new star has emerged: A Mon Calamari wearing a cable-knit fisherman sweater beneath space overalls.

Let me be up front about something: I know absolutely nothing about Star Wars or this Disney+ series. I’m sorry, I just haven’t gotten around to watching yet. But as the girl who gasped and whispered “sweater” in a public showing of Knives Out when I saw Chris Evans wearing his now-famous swoon-worthy cream cable-knit Aran sweater, I can confidently say I’m a sweater expert. And this Mon Calamari’s sweater is GOOD.

After learning that a Mon Calamari is the name of the species of humanoid fish creatures in Star Wars and not two words spit out by a Sopranos nickname generator, I decided to give this especially fashionable Mon Calamari, who I’m calling Mon Cal for the purposes of this piece, some well-deserved wardrobe praise.

I would love to ask Mon Cal how they obtained this gorgeous, earthly piece of knitwear on whatever moon or faraway place they’re living on. Like, is this wardrobe normal??? IDK. I have a lot of questions. But one thing I know for sure is that this sweater is a hit with Mandalorian fans, and Knives Out‘s bad boy, Ransom Drysdale, must be absolutely shaking.

“[Ippolito] is one of the many special effects artists that work on The Mandalorian,” Gavankar told IGN in a phone interview. “And Ippolito was one of the makers and actors behind a Mon Calamari seen in the teaser trailer for ‘The Heiress.’ The one putting their hands on their hips while the trailer cuts to the Razor Crest seemingly crash landing.”

“There is a Mon Calamari who puts their hands on their hips. That’s Frank Ippolito who’s inside that rig. He made that headpiece and it takes two puppeteers to animate it,” Gavankar explained. “And they needed a second puppeteer to just handle the nostrils of this character. And [Ippolito] called me and he said, ‘Do you want to come puppeteer the nostrils of this Mon Calamari?'”

Gavankar said, “Fuck yes,” and the rest is history.

Now that we have some more information on the Mon Cal, how about the Mandalorian wardrobe team reveals those sweater deets?

The Mandalorian is now streaming on Disney+.