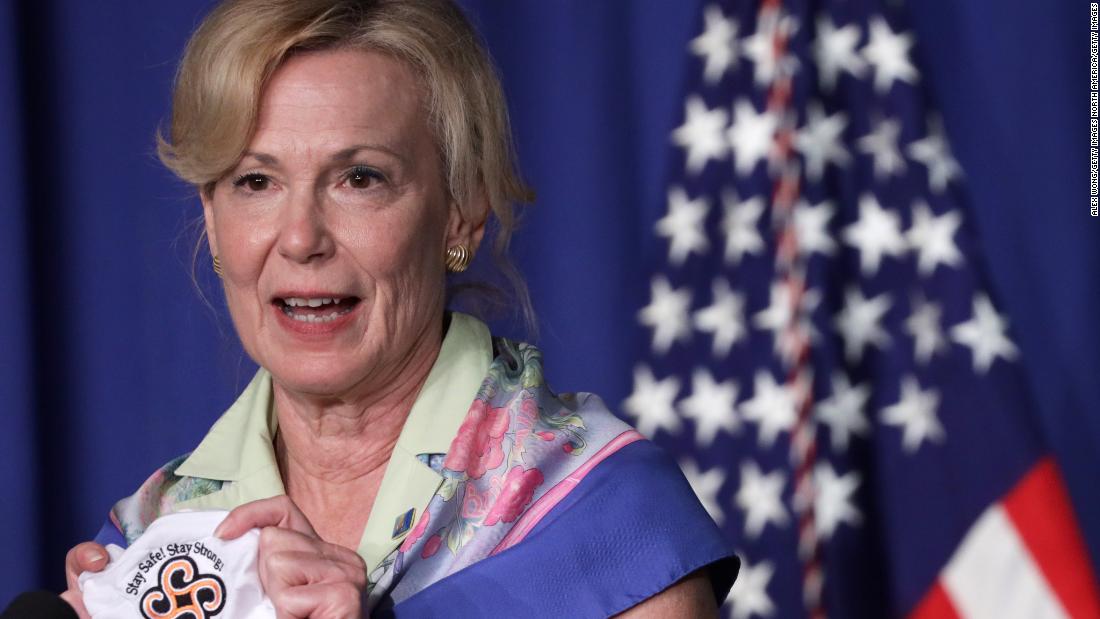 Kent Sepkowitz is a CNN medical analyst and a physician and infection control expert at Memorial Sloan Kettering Cancer Center in New York. The views expressed in this commentary are his own. View more opinion at CNN.

Initially, and widely, viewed as someone of experience, savvy and integrity, she currently finds herself in a crossfire hurricane, equally disparaged by President Donald Trump, who called her “pathetic,” House Speaker Nancy Pelosi who announced she had “lost confidence” in Birx, and a number of professional peers who once welcomed her appointment. (At times, it seems that the director of the National Institute of Allergy and Infectious Diseases, Dr. Anthony Fauci, once her mentor and now a frequent White House outcast, continues to support her.)
This type of reputational crash is common enough with politicians but not in the medical world. Birx and I graduated medical school in the same year, both became infectious disease specialist specialists with a career focus on HIV infection, and know many of the same people. But I have never met her, nor have I heard anything — good or bad — to allow me to determine whether she indeed is responsible for some large part of the disaster.
So, to sort this out, I did what academic doctors (like Birx and me) always do: I searched her published scientific work in PubMed, the National Library of Science database.
I had found this approach useful several years ago when the ophthalmologist, Rand Paul, ran for the United States Senate. A PubMed review showed just one article by Dr. Paul, a report that reflected his fascination with the cornea, the single area in the body that lies outside the reach of what is called “immune surveillance” — the happy place for a libertarian.
Dr. Birx emerges in the medical literature as extremely serious and accomplished. In her 233 articles published across almost four decades of professional life, she has written on HIV vaccines, on genetic mutations of HIV, and then, in 2005, in her role as director of CDC’s Division of Global HIV/AIDS (DGHA), on the challenges of providing treatment to areas of the world, including Africa, South America and Southeast Asia, that lacked a reliable health care delivery infrastructure.
Among other interests, she appeared to be concerned that adolescent girls and young women have access to HIV prevention and treatment. In 2017, she envisioned a world that provided “a supportive social environment that enables young women to grow up into young adults who are free to graduate from high school and plan their pregnancies (emphasis mine), ultimately entering adulthood safe, healthy, and free from HIV.”
Of particular interest in these Covid-19 times, she was an ardent champion of testing, testing and more testing for HIV. She stressed “routine access to routine viral load monitoring [a blood test] in all settings” and “analysis of HIV [drug resistance] data [via blood test] to monitor the success of mitigation strategies.”
Plus she worried that the world was not ready for the challenge this much testing would pose to laboratories, voicing her concern in an article entitled, “Laboratory systems and services are critical in global health: time to end the neglect?” In other words, she was a loud voice for aggressive testing and collection of practical data to inform next steps.
Her work was not without controversy. For example, she led a trial of an HIV vaccine that was so unpromising that a group of scientists, including Dr. Robert Gallo, wrote to Science to “question the wisdom” of moving forward. In medicine, writing this sort of letter to Science is a very rare, very serious business.
Birx and her team held their ground, citing the “formidable challenge” of HIV vaccine development. The study went forward and was published five years later, showing that the vaccine demonstrated “only a modest benefit.”
All of her work shows Birx to be a sophisticated physician-scientist with genuine interest in the health of vulnerable and underserved populations. Global health is not an area of medicine for slackers or clock punchers. Progress is slow, recognition is slight, financial reward completely absent.
And it takes a person of tremendous patience and emotional intelligence to work effectively for more than two decades in country after country led by a variety of leaders, some corrupt, others scoundrels, and still others looking to make an American buck off the crisis occurring in their country.
Looking at her decision to enter the Covid-19 crisis, my guess is that she figured her global experience prepared her for the White House vortex, reasoning that though the administration leaders might be a bit more difficult than what she had seen, they were still a breed quite familiar to her. Based on her experience, she trusted that once again she could prevail with street smarts, honesty, hard work, a little flattery and an articulation of the common good.
Oh, well.
Unfortunately, in my view, she truly has made a real hash out of the entire effort, with a series of poor decisions — changing hospital data reporting protocols for coronavirus patients to cut out the US Centers for Disease Control and Prevention and report directly to Health and Human Services, painting a rosy picture of the problem and of the President’s engagement and still developing no national plan for testing, tracking, opening schools and businesses.
Sure, she has been set up as the fall-guy by the dark arts of her West Wing suitemates but, no matter how she got here, she has become the face of the failure.
To which I say to Dr. Birx: It is not too late to help the country. The cruelest trick of Trump and his group is this: they rely on the decency and the sense of historic order of those whom they destroy to keep their secrets secret.
But the time long ago passed when maintaining silence was the surest sign of integrity and patriotism. Tight lips sink ships. By speaking up about what you have witnessed, you can save more lives than you ever will save by continuing on your current path.