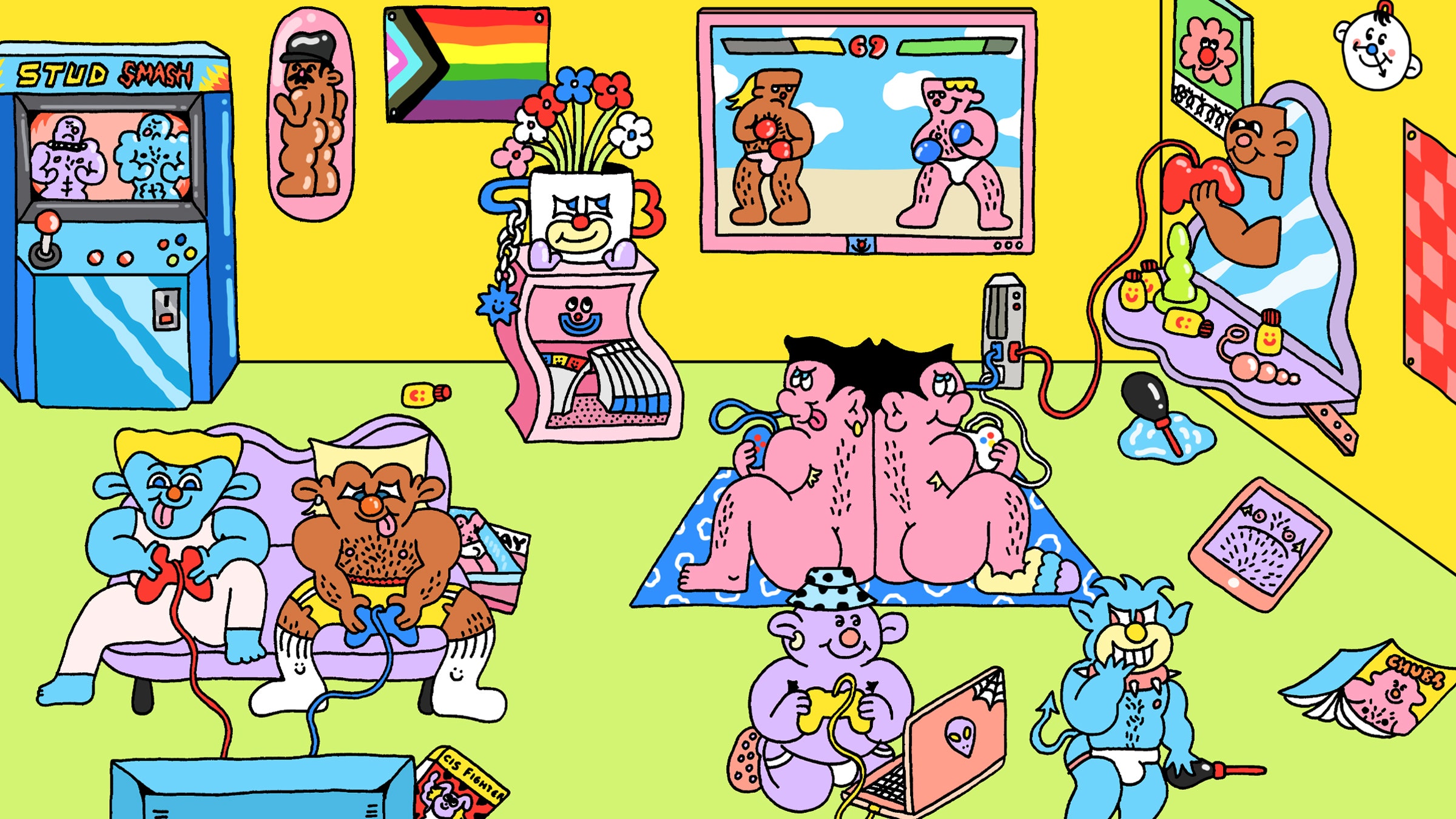 Dream Daddy, which was released in 2017 and starred a single father looking to romance other solo dads, featured in a Markiplier video with 6.8 million views, a sign that LGBTQ+ friendly romance games were starting to push into the mainstream. Meanwhile, thin lists of gaming’s “most sizzling” sex scenes unintentionally reveal the sad state of big budget titles by continually repeating aging games like Mass Effect and The Witcher. Not every game needs sex, but for a subject that’s fundamental to the human experience, mainstream gaming lags well behind other mediums in portraying it seriously and credibly.

“It became a project about portraying a realistic coming out experience, and trying to communicate a lot of the struggles I went through when I was coming to terms with my sexuality,” says Conway. A particular highlight is when a datable character reassures the player that there’s “no wrong way to come out” and “no wrong way to be gay,” advice Conway wishes he could have recieved when he was “young and scared and closeted.”

Dream Daddy, while not from a major studio, was funded by YouTube behemoths Game Grumps. It was praised for its engaging tone, and for giving a queer narrative mainstream attention, but was also criticized for not engaging with gay culture or using queer language. That’s not to say it wasn’t enjoyable, but critics could tell that a game about the gay dating scene wasn’t made by gay men. Good representation needs authenticity, and Conway noted that indie games are freed from the market demands and design committees that can compromise accuracy.

“Representation of queer characters in mainstream video games isn’t great, although it’s getting better,” Conway said. “So queer people find they want ways to tell their own stories and represent their identities, and often end up creating games to do so.”

Charissa So and Tida Kietsungden, whose visual novel A Summer’s End portrays a romance between two women amid the rapidly changing world of 1980s Hong Kong, echoed the sentiment that freedom from market demands allows for a more honest portrayal of sexuality. “When sexual content is used as a selling point, the commodification of it produces content that may be disingenuous and lacking in emotional depth,” they wrote. “Distilling sexual content to what’s most marketable to a general audience erases the diversity in human sexuality. As LGBT+ creators, we wanted to depict lesbian sexuality in a way that was authentic and honest.”

Authenticity can sometimes limit appeal. One of Conway’s games, all of which feature queer characters, “received a comment from a player dissatisfied with the fact that the game contained gay sex”—despite a warning on the download page, a second warning within the game, and an option to skip the scene entirely. For Conway, that “was a good reminder that I should just make the games I want to make.” But while games about coming out or the unique social obstacles faced in 1980s Asia may not attract huge audiences, that doesn’t take away from the importance they have to those who do play them.

Sands’ goal was to make her characters face hardships without basing those challenges on their identities. The trick, in her words, was “to balance real-world discrimination with the notion of a ‘queer utopia’—I wanted to create a world where it was completely fine to be a LGBTQ+ person, but I also wanted to bring up some issues for discussion.”

In a story-driven indie game, sex can also serve varying thematic purposes rather than exist for the sake of existing. Hardcoded was lauded as an unabashed celebration of the trans gaze, whereas sex in A Summer’s End was, according to So and Kietsungden, “intended to be expressions of intimacy, where the two leading characters reach an emotional peak in their relationship.” Sands elaborated on how eroticism can serve story.

“In mainstream games, sex is often a secondary matter. In indie games, it’s easier to focus on certain themes, and since you already know your game will be a niche product you don’t have to appeal to everyone.”

Knife Sisters is another visual novel, a genre largely untouched by major western studios. But they have a long—and often sexual—history in Japan, and for indie developers they’re relatively easy to make and can serve as a showcase for good art and storytelling. The visuals and soundtrack of A Summer’s End, for example, immediately transport the player to the game’s distinct setting. Romance and eroticism require mood, and even story-heavy series like Mass Effect and The Witcher dedicate most of that mood to slaughtering enemies, which can make the occasional jump to sex more jarring than engrossing.

Visual novels, both sexual and chaste, have long been a space for LGBTQ+ developers and players, but they’ve grown increasingly popular, to the point where KFC released an advertisement game mocking the genre’s tropes. That wasn’t always the case; 2016’s queer Ladykiller in a Bind, a BDSM-heavy romcom starring a cross-dressing woman that engendered some controversy for its exploration of consent, was initally banned from Steam for its sexual content despite the platform’s hosting a handful of both sexual visual novels and games mostly created as thin excuses to deliver porn for straight men. In June 2018, after years of unclear standards, Steam declared that it would “allow everything” that wasn’t illegal or a blatant troll job to remain on the platform. Following the announcement, Steam’s “Sexual Content” section jumped from 65 entries to the over 2,800 games it has today. Clearly, attitudes are changing.

Indie developers are, however, often best served by indie-focused storefronts. Conway credits the itch.io platform with helping developers on many fronts, noting that it lacks Steam’s $100 upload charge and payment thresholds. Itch.io also has a reputation for clear, developer-friendly policies, only takes a 10 percent cut instead of Steam’s 30 percent, and gives buyers the option of chipping in more than a game’s minimum price. Free or cheap games can entice players who then retroactively pay for a product they enjoyed; Conway’s Yearnings is free, but payment tiers offer bonuses like a soundtrack and wallpapers. Conway believes that without itch.io, many indie games “would likely never be discovered, much less able to be monetized to allow their developers to continue making games.”

However these games are made available, easy access will remain important as long as they not only continue to entertain players, but also give them a safe way to figure out who they are. A few of Hardcoded’s players have said: “Your game made me realize I was trans,” and “your game made me more comfortable with my body,” Wintermelon wrote.

“It makes me feel like I’m doing something important. I think the one that makes my heart shine brightest is when people say that Hardcoded made them cry.”