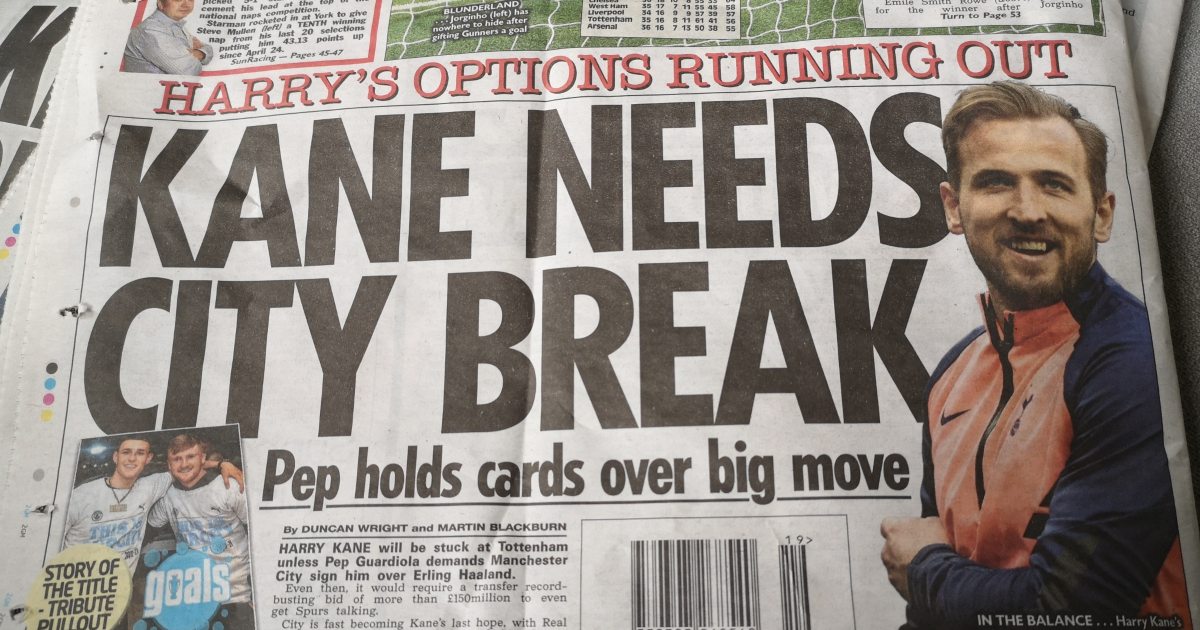 The Sun are desperately trying to sell Harry Kane to Manchester City or Manchester United.

Kane and unable to get out

A bizarre back page from The Sun on Thursday as it takes two reporters – Duncan Wright and Martin Blackburn – to bring us the startling news that:

‘HARRY KANE will be stuck at Tottenham unless Pep Guardiola demands Manchester City sign him over Erling Haaland.’

This is bizarre because the two things we absolutely know for certain are that 1) Harry Kane will not be sold to a Premier League rival for less than £150m and 2) Manchester City will not pay £150m for Harry Kane or any other striker.

We know this because of Manchester City’s own history in the transfer market but also because Guardiola himself said this last month:

“Listen, with these prices we are not going to sign any striker. It’s impossible – we cannot afford it.

“I understand completely the situation of the club. We are not going to do any specific or special thing that the club cannot do.”

So we guess that Harry Kane is ‘stuck’ at his boyhood club that he loves.

But at least Kane has managed to secure another free advertisement in a national newspaper, just days after Wright exclusively wrote that ‘HARRY KANE is ready to ask Daniel Levy to consider offers for him this summer’ – a story that presumably came from a source ‘close to Kane’.

And was that the same source that Wright consulted literally a month before when he exclusively wrote that ‘HARRY KANE is set to stay at Tottenham this summer with the club refusing to let him join another Premier League team’?

He went from being ‘not currently willing to force his way out’ to being ‘ready to ask Daniel Levy to consider offers for him this summer’ in a month. And then a few days later he is relying on Guardiola demanding something that he would never demand and that his club would probably refuse anyway.

And that’s without getting into the massive minefield of Wright’s extraordinary exclusive from last week that ‘THE Glazers are ready to sanction a £90million Manchester United bid for Harry Kane as they desperately attempt to quash fan fury’ which included the line that ‘SunSport understands he would be interested in an Old Trafford move’. No sh*t.

SunSport understands an awful lot about Harry Kane right now; Mediawatch understands that this bizarre advertising campaign masquerading as news is likely to come to nought.

Gunner catch them all

Mind you, the alternative back page (adopted by the Daily Mirror, the tabloid of choice in Liverpool for obvious reasons) is to pretend that Jurgen Klopp has said something incendiary when he has absolutely done nothing of the sort.

The clue is that the opening line to David Maddock’s piece is ‘JURGEN KLOPP says champions Manchester City have “the best manager in the world” in charge of “an incredible squad”, which might just be the least back-pagey back-page opening line we have ever read.

Yes, he’s ‘GUNNING FOR PEP’, the man he describes as “the best manager in the world” because he said/’warned’ that “you can beat them”, which is technically true because Liverpool won the title last season. It’s absolutely true but it’s absolutely not news.

And silly David Maddock, burying the quote from Jurgen Klopp that “getting the players back makes us already better” because “these are our first ‘transfers’” in the very last line of his piece.

Over to the Mirror website to give it the air it deserves:

On the back page of the Daily Mail, we have a different kind of story – a back-page exclusive that Manchester United players are ‘sworn to secrecy over their preparations’ for the Liverpool game. Because usually of course they stick their arrangements all over Facebook.

Mediawatch understands this rush to champion Leicester City as a model community club, with Brian Reade jumping on the bandwagon with his Daily Mirror column in which he lauds the Foxes.

‘They have shown themselves to be as close to a model Premier League club as you can get.

‘From the generosity of their owners, their inclusion of the fans and embracing of the community to their promotion of youth and superb recruitment policy, they are set up to succeed in the the best possible way.’

Now there is a lot to admire about Leicester, but let’s not pretend that spending more than 100% of your turnover on wages makes you a model Premier League club.

#LFC wages to turnover ratio worsened from 58% to 66%, the club’s highest since 2016, though this was still one of the better results in the Premier League. If we adjust for the estimated COVID revenue loss, it would have been a highly respectable 59%. pic.twitter.com/K0oJf8jfYO

Up above the streets and houses…

You can always rely on the British tabloids to bring you cutting-edge cultural references. pic.twitter.com/SPdQ1eWkK7